New England native Rob Font just had the performance of his career on Saturday, as he defeated multiple-time world bantamweight champion Marlon Moraes in the very first round.

Moraes came out looking to grapple, and showed some much improved wrestling early on. However, Font was able to scramble his way out of both takedowns and get back to his feet. 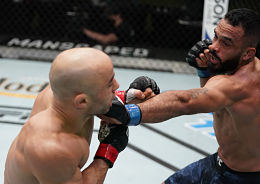 Once Font got back to his feet, it was over very shortly thereafter, as he TKO’d Moraes at 3:47 of round one. Every jab he landed snapped Moraes’ head back, then once Font landed that uppercut and dropped him, it was a wrap.

Many of us thought the stoppage was pretty late, about 15 seconds late at that, which isn’t cool at all.

The referee’s job is to protect the fighters, nothing else. However, Marc Goddard was accused by Moraes of stopping his Cory Sandhagen fight early, and asked Goddard in advance to let the fight go.

So in that sense, it wasn’t too bad of a stoppage. Goddard did his job. Font’s had a couple coming out parties thus far into his career, but this one takes the cake. 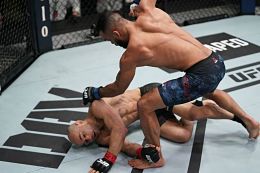 Font hadn’t fought in 54 weeks leading up to this bout, while Moraes had fought twice since then. Moraes is the best opponent Font’s ever fought, he’s a six-time WSOF Bantamweight Champion, and until he lost to Henry Cejudo, he was looking absolutely unstoppable.

Font came to the UFC with a record of 10-1, and KO’d TUF, WEC, and UFC veteran George Roop (15-10-1) at 2:19 of round one of his promotional debut. He followed that up with another knockout victory, before losing a unanimous decision to John Lineker.

He rebounded from this with back-to-back victories over Matt Schnell (10-2, KO) and Douglas Silva de Andrade (24-1, 1 NC, guillotine choke), before being submitted (guillotine choke) by Pedro Munhoz (14-2, 1 NC). Font then TKO’d Thomas Almeida (22-2), before losing a unanimous decision to Raphael Assuncao (26-5). 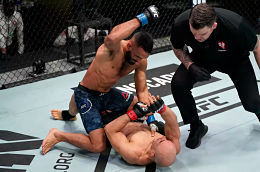 Now that he’s on a dominant three-fight win streak, what’s next for Rob Font? Well, he just skipped the line from the No. 11 ranked bantamweight to the No. 5 ranked bantamweight, so it’s going to be nothing but tough fights from here on out. 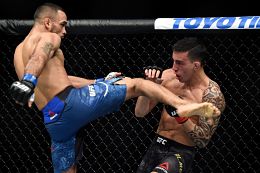 Aldo hasn’t really reinvented himself at bantamweight per se, but he does have a whole new list of challenges, and this would be an epic encounter between two brutal strikers.

The No. 3 ranked former bantamweight champion Cody Garbrandt would also be a lot of fun to see, and it’s a sensible match up. As most of us know, Garbrandt was scheduled to face Deiveson Figueiredo for the UFC Flyweight Championship at UFC 255, but was forced to withdraw from the bout.

Now that the flyweight champion and Brandon Moreno battled to a draw at UFC 256, that division may be jammed up for a little bit. Surely there’s going to be a rematch, it was a title fight that ended in a draw, and neither Figueiredo, nor Moreno need to fight again until at least the middle of 2021. 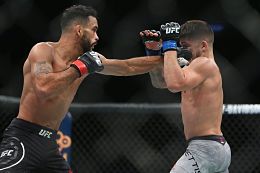 They both took so much damage in that fight, the UFC needs to give them time to rest and recover. A bout between Font and Garbrandt would be a bout between two of the best pure boxers in the sport.

Lastly, is a bout between Font and the winner of Pedro Munhoz and Jimmie Rivera. Munhoz has already defeated Font, so it’d be good to see Font attempt getting that one back, and Rivera is one of the most technically sound bantamweights on the planet in both the striking and wrestling departments.

At 33-years-old, Font is right in the middle of his athletic peak, he can’t afford any more year-plus layoffs. Whatever ends up being next for him, it’s a sure thing we’ll all be tuning in. Font’s future is looking very bright right now.

By Mike Pendleton 8 mins ago