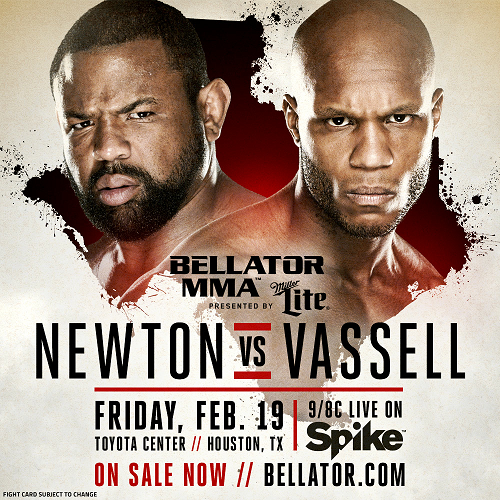 The fight joins a card that already features a double main event — Ken Shamrock (28-16-2) meets Royce Gracie (14-2-3) for a third time and Kimbo Slice (5-2) will fight the man who has been calling him out since their friendship ended years ago, Dhafir Harris, better known as “Dada 5000.” In featherweight action, Emmanuel Sanchez (12-2) will look to continue his torrid pace when he meets Daniel Pineda (21-11) and a pair of lightweight assassins go to battle, when Melvin Guillard (35-15-2) returns to meet Mike Bronzoulis (18-9-1). Preliminary contests will be announced shortly.

Both Newton and Vassell were participants in the four-man, light-heavyweight No. 1 contender tournament at “Bellator MMA: Dynamite.” Now, the pair of 205-pounders will look to re-establish themselves atop one of the deepest and most competitive divisions in Bellator MMA.

A former champion, Newton will be making his 12th appearance for the Scott Coker-led promotion and hopes to duplicate the success he experienced at the expense of Vassell during “Bellator 130: Newton vs. Vassell” back in 2014. Better known as “The Hardcore Kid,” the 31-year-old has been half of some of the most memorable contests in Bellator MMA history, namely, his spinning-backfist finish of “King Mo” and his back-and-forth war with current Bellator MMA Light Heavyweight Champion Liam McGeary.

Undoubtedly one of the goals for Vassell in 2016 is finding his way onto the recently announced Bellator MMA debut in London later this year. For this to come to fruition, “The Swarm” surely needs to redeem himself from the fifth-round, rear-naked choke submission defeat he suffered at the hands of his “Bellator 149: Shamrock vs. Gracie” opponent. February 19 will mark the seventh time Vassell has competed under the Bellator MMA banner and “The Swarm” will be looking to add to his impressive finishing mark of 13 stoppages in 15 victories.

By Mary Hartman 3 mins ago

By Mary Hartman 5 hours ago

By Kyle Carroll 10 hours ago