As New York’s largest amateur event looms around the corner, Aggressive Combat Championships and KTFO, will be hosting another meet and greet at their sponsor’s (Buffalo Wild Wings) Centereach location on Long Island, on December 10th. KTFO and ACC’s cross promotion event, World’s Collide, is scheduled for Friday, December 16, 2016, at The Space at Westbury Theater. The fight card has over 17 bouts, including seven title fights. 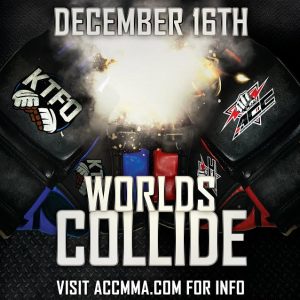 The meet and greet hosted by the promotion are expected to have several of the local MMA athletes participating on the fight card there, for media interviews and fan appreciation. At the last meet and greet, champions Jillian “The LionHeart” DeCoursey, Matt “The Alpha” Roman, and Steven Inoshima, hung out with fans during the UFC 205 prelims.

“**Announcement Dec 10th from 7-9pm will be another live Meet and Greet at Worlds Collide Official sponsor Buffalo Wild Wings in Centereach LI 1926 Middle Country Rd. Come say hello to your favorite Local Fighters and rising stars of MMA , you never know what UFC Super Star may show up to say hello to fans during the live showing of the UFC fights that night? So come on down say hello have a bite and a few beverages and enjoy a total night of pure MMA! Live interviews with Worlds Collide fighters and with 2 of the Principals of the Promotion. Like ALWAYS if you show up and share in the evening there is always a chance of winning FREE tickets and of course everyone who shows will get a Promotional card with discounts!”

Be sure to come meet some fighters, take photos with the belt, and receive discounts on the tickets for the upcoming event, World’s Collide. Tickets can be purchased at either promotion’s website, www.ACCMMA.com , and/or www.KTFO.com.

My MMA News.com will be there conducting interviews with fighters, be sure to say hi to us as well!

Below is an interview with Tom Kilkenny at the last Meet & Greet, at Buffalo Wild Wings in Farmingdale.

By Connor Northrup 17 mins ago

By Brady Briggs 59 mins ago