Fresh off of his impressive wins over Rustam Chsiev and Murilo Santana at ADCC 2019 which earned him his spot as #4 in the world at 88 kg, Jon “Thor” Blank has been working around the clock to open his own jiu jitsu school in Allentown, Pennsylvania.  While competing with some of the absolute best in the world, Jon has also held a full-time job as a sub-electrician working for PPL Electric.  Utilizing some of his winnings from his dominant run at EBI 17, he has now invested in establishing his own school, so that he can eventually quit his regular job and focus all of his time and energy on teaching, training and competing at the highest level.

His school, 10th Planet Allentown, is located on S. Cedar Crest Boulevard in Allentown, Pennsylvania and is considered to be a sister school to 10th Planet Bethlehem.  10th Planet Bethlehem is owned and run by Jon’s coaches, Zach Maslany and JM Holland, who taught Jon since he was a fresh white belt and eventually promoted him to be their very first black belt.  10th Planet Allentown officially opened its doors for classes on Monday, October 14, 2019, which was considered to be a “soft” opening with only certain classes the first week.  Now headed into its third week open, all classes are live and you can check out the schedule here if you want to get an idea of the classes offered.  While the schedule is primarily jiu jitsu focused with day classes, night classes for both beginners and more advanced students, kids’ classes and a free women’s only class, 10th Planet Allentown also offers kickboxing as well twice a week.  There is even a free open mat that is open to all affiliations on Friday nights to kick off the weekend right. 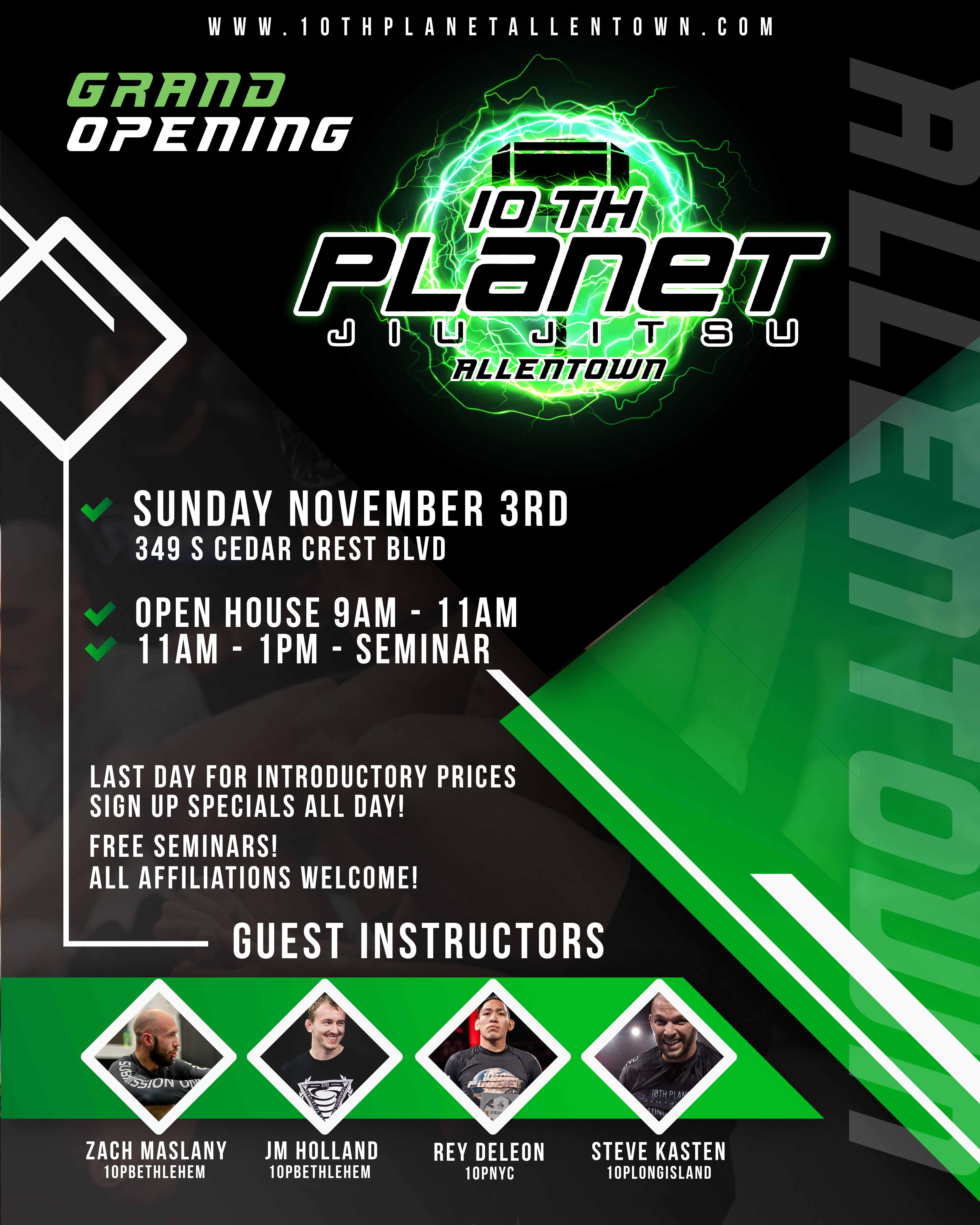 This Sunday, November 3, 2019, 10th Planet Allentown will be having their official Grand Opening celebration at the school.  Beginning at 9 a.m. there will be an open house for anyone who wants to check out the facilities and get more information on memberships.  At 11 a.m. the real fun begins with a free two-hour seminar.  The seminar will feature visiting 10th Planet competitors Rey DeLeon from 10th Planet New York City, Steve Kasten from 10th Planet Long Island and Zach and JM from 10th Planet Bethlehem all showing some of their favorite techniques.  After the seminar there will be an open mat as well for anyone who wants to get some rolls in.  This will also be the last day that the advanced sign up pricing of $99 per month is available, so if you are interested in signing up you’ll want to do it on or before November 3rd to get that discounted pricing locked in.  This is sure to be a great addition to the area with such an elite competitor at the helm looking to share his skills.