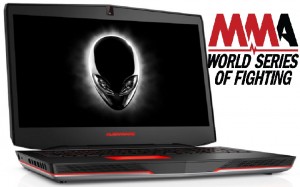 “We are thrilled to welcome one of the most cutting edge entities in personal computing to our growing family of partners,” said World Series of Fighting CEO Carlos Silva.

“As Dell’s premier gaming brand,” continued Silva, “Alienware, through its innovative hardware products, has strived to create the ultimate experience for avid gamers, much like World Series of Fighting is endeavoring to provide the best possible entertainment experience for fight fans, so we are proud to partner with this highly-committed, customer-focused company.”

“Alienware is happy to partner with World Series of Fighting and to continue its support of one of the most exciting sports in the world,” said Alienware General Manager Frank Azor.

As part of the ongoing sponsorship agreement, which began with the “WSOF 22: Palhares vs. Shields” world championship doubleheader on Saturday, August 1, the Alienware brand will be prominently visible in the decagon cage and elsewhere on all live NBCSN telecasts of World Series of Fighting events.

In the co-main event of “WSOF 23: Gaethje vs. Palomino II,” reigning world middleweight (185 pounds) champion David Branch will attempt to become the first two-division champion in World Series of Fighting history as well as the promotion’s first-ever world light heavyweight (205 pounds) champion when he squares off with determined, hard-hitting KO artist Teddy Holder in the championship round of the four-man, multi-event tournament that began in Phoenix on March 28.