Bare Knuckle Fighting Championship holds Bare Knuckle FC 5 tonight from the Mississippi Coast Coliseum in Biloxi, Mississippi. A pair of former UFC fighters in Artem Lobov and Jason Knight headline the fight card which will be broadcast on pay-per-view via FITE.  The lineup that promoter David Feldman has put together for tonight promises to make the show the best fight card the BKFC organization has held to date.

Another longtime UFC veteran in Chris Leben, will make his Bare Knuckle FC debut as he meets Justin Baesman.

History was made as the first female American Police Gazette title holder was established when Christine Ferea takes on Britain Hart. They battled for the women’s featherweight (125-pound) title.

Preliminary bouts kicked off at 8 p.m. ETC and can be watched for free below.  The pay-per-view portion of the fight card retails for $29.99 and also can be purchased and viewed below.

The opening preliminary bout paired Mississippi’s Bobo O’Bannon up against Troy Beets in a highly entertaining and exciting contest which saw both competitors find success early on.  O’Bannon, the hometown favorite, bloodied from the nose, forced Beets to turn his back in the fourth round while teeing off.  O’Bannon wins the fight by way of technical knockout.

Sheena Starr, walked to the squared circle in a shirt that depending on which side of the political fence you side, might please you, or might upset you.  The shirt read “Hillary Clinton is a c**t.”  Starr defeats Ivana Coleman by way of KO just 37 seconds into round 2. 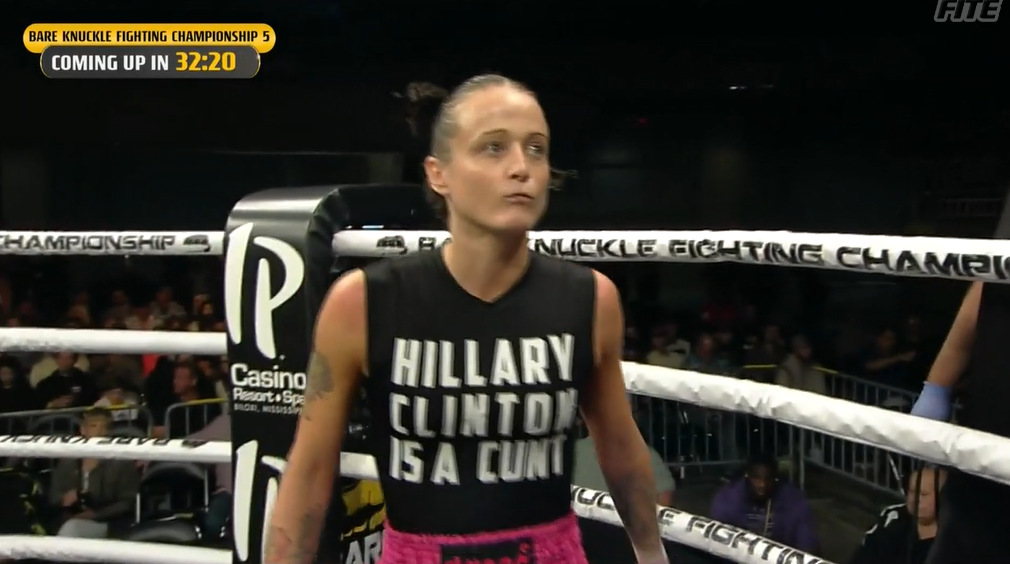 The first fight to kick off the pay-per-view portion of the BKFC 5 fight card was lightweight tournament semi-final matchup between former UFC fighter Johnny Bedford and Abdiel Velazquez.  “Brutal” Bedford was all over the younger opponent. Bedford kept pointing down at the canvas, signaling for Velazquez to ‘toe the line.’   Bedford cuts Velazquez over the right eye and drops him multiple times in the contest before the fight is stopped early in the fourth round.  Bedford will advance to the finals to take on the winner of Reggie Barnett and Rusty Crowder who fight later tonight.

Isaac Vallie-Flagg came forward, and kept the pressure on Randy Hedderick who appears to have broken a hand, maybe two, and has severe swelling under his right eye.  Vallie-Flagg, relatively unscathed, is your winner by third round TKO.

The second lightweight tournament semi-final bout paired Reggie Barnett up against Rusty Crowder in a fight that would send the winner to the finals against Johnny Bedford who won earlier in the night.  This contest would go all five rounds and need the judges to render a decision.  Crowder was docked a point after tossing Barnett to the canvas.  That deduction might prove to be fatal in the outcome.  Barnett wins unanimous decision in a fight that appeared to be a little closer than what the judges let on.  BKFC President David Feldman later came center ring to announce that Crowder will forfeit half of his purse because he chose to run most of the fight.  Feldman certainly just ignited a fire for future competitors.

UPDATE:  I spoke with BFKC President David Feldman on Sunday morning, hours after the event concluded.  Feldman states that Crowder has been paid.  Full statement below:

“I am passionate about this sport and the building process. The fighters get paid very well. All I ask is that they fight their hearts out. I tell the fighters that the companies growth depends on their performance. At the time I thought it was the right thing to do, but did what I thought was right so, after the fight Rusty was paid what he was contracted to be paid. We had a talk and he understands what I meant. It was more of a knee jerk reaction, because he didn’t try to fight. That being said, we couldn’t be happier with the results of last nights event and look forward to what to the future holds.”

Heavyweights Chase Sherman and Saw Shewmaker teed off one one another for five full rounds.  The crowd very much in favor of Sherman but the fight is so closely contested that it goes to a very rare split draw.

Christine Ferea inflicted some serious damage to her opponent in Britain Hart, cutting her badly on the left eye in the second round of their women’s featherweight title fight.  Doctors are forced to stop the contest and Ferea wins the title.

Chris Leben gets the second fastest win in BKFC history with a 0:25 second knockout over Justin Baesman. Very impressive win for the UFC Veteran.

What a main event we have has Artem Lobov is knocked down early in the first round, but he protests it at a slip. Action continues and Jason Knight is cut open, and it’s bad.  Lobov slips again, ruled a slip.  Lobov drops Knight and commentator Antonio Tarver says the fighter is spitting teeth.  Knight stands, round continues, and goes to the bell.  Absolutely bananas fight.  Back and forth brawl.  Both fighters completely busted open.  Lobov wins a unanimous decision.  This fight was absolutely insane.  Could be a fight of the year candidate.

It was announced after the main event that Artem Lobov would fight Paul Malignaggi in June and that Jason Knight would absolutely be welcomed back to the promotion. 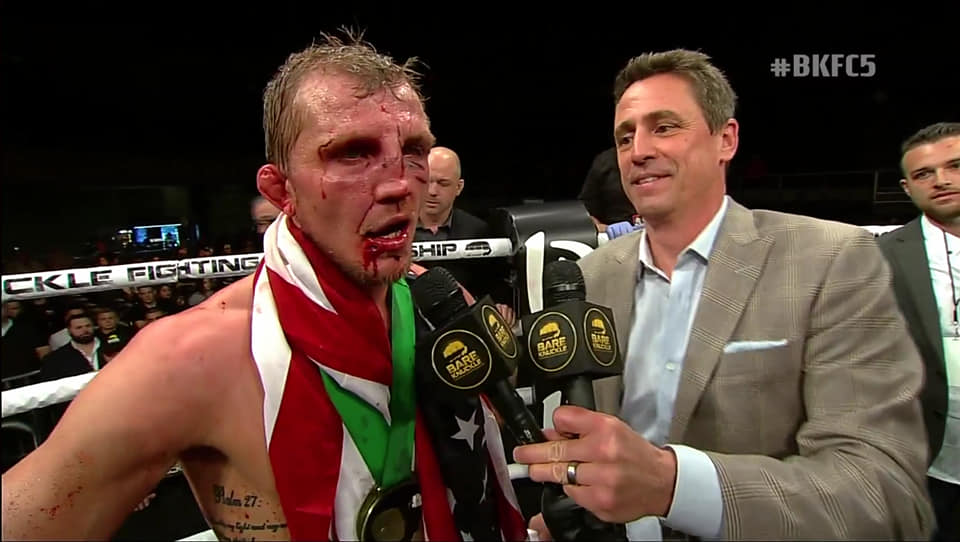 Watch the preliminary bouts below beginning at 8pm ET:

Watch the main PPV portion of BKFC 5 below beginning at 9pm ET:

By David McKinney 16 hours ago