Video interview with Brian Moore above

On Saturday, October 23, 2021, Irish bantamweight Brian “The Pikeman” Moore stepped into the Bellator cage in Moscow, Russia to face hometown prospect Nikita Mikhailov. Though the SBG Ireland fighter would go on to lose that fight via decision, little did we know that the biggest battle Moore was facing was the one inside his mind.

Speaking to MyMMANews.com, the 34-year-old Irish veteran opened up on his mental health struggles in the lead up to that night at Bellator 269, and the aftermath that ensued.

“I’ve struggled on and off with my mental health for 17 or 18 years,” Moore explained.

While it wasn’t Moore’s first rodeo with mental health challenges, this time it was different. During fight camp, inner demons from the Wexford native’s earlier life rose to the surface of his mind to the point where he became consumed by anxiety. Initially, Moore essentially “toughed it out,” pushing the emotions to the back of his mind as best he could. It wasn’t until fight week itself, far from home comforts and distractions that the scale of Moore’s struggle was revealed to him.

“When I arrived in Russia, all of a sudden I was away from my family. I had no training, I was in a hotel room, and there was no escaping it. There was no escaping these thoughts that were in my mind, these things that I had buried for many years, and they just came to the surface. When I was in Russia, it was a rough time for me. I went 51 hours without sleep. I couldn’t. I was having panic attacks, I just felt dreadful. I had never felt to that extreme with these things” Moore recalled.

This wasn’t Moore’s first experience with panic attacks, but the relentless nature of them was something he had never before endured.

“Panic attacks, I’ve only had one or two in my whole life. In Russia, it was happening every day while I was there.”

Days preceding a televised fistfight that would usually be spent resting and prepping for the task ahead were instead consumed by intense and restless clouds of anxiety.

“My heart rate was always through the roof. I went 51 hours without sleep. I remember looking at my phone and trying to calm down. Trying to get myself into a better state. My ‘Calm’ app had 6 hours of meditating, and I still was like a coiled spring. Usually, I do all these little interventions that help, but nothing was helping. It was probably the worst period of my life, to be honest!” Moore remembers.

“I just remember that hotel room, and I was doing everything I could to try to get some sort of release. I was in the shower at 4am just to try and calm down.”

Unfortunately, no matter which intervention method was tried, it didn’t work. “I didn’t have the tools to combat it,” Moore laments.

So, with no relief from the mental war that was going on between the different portions of the Irishman’s brain, Moore entered the Bellator cage in a trance-like state. Though he makes no excuses for the loss, he vividly remembers the state he was in at the time. 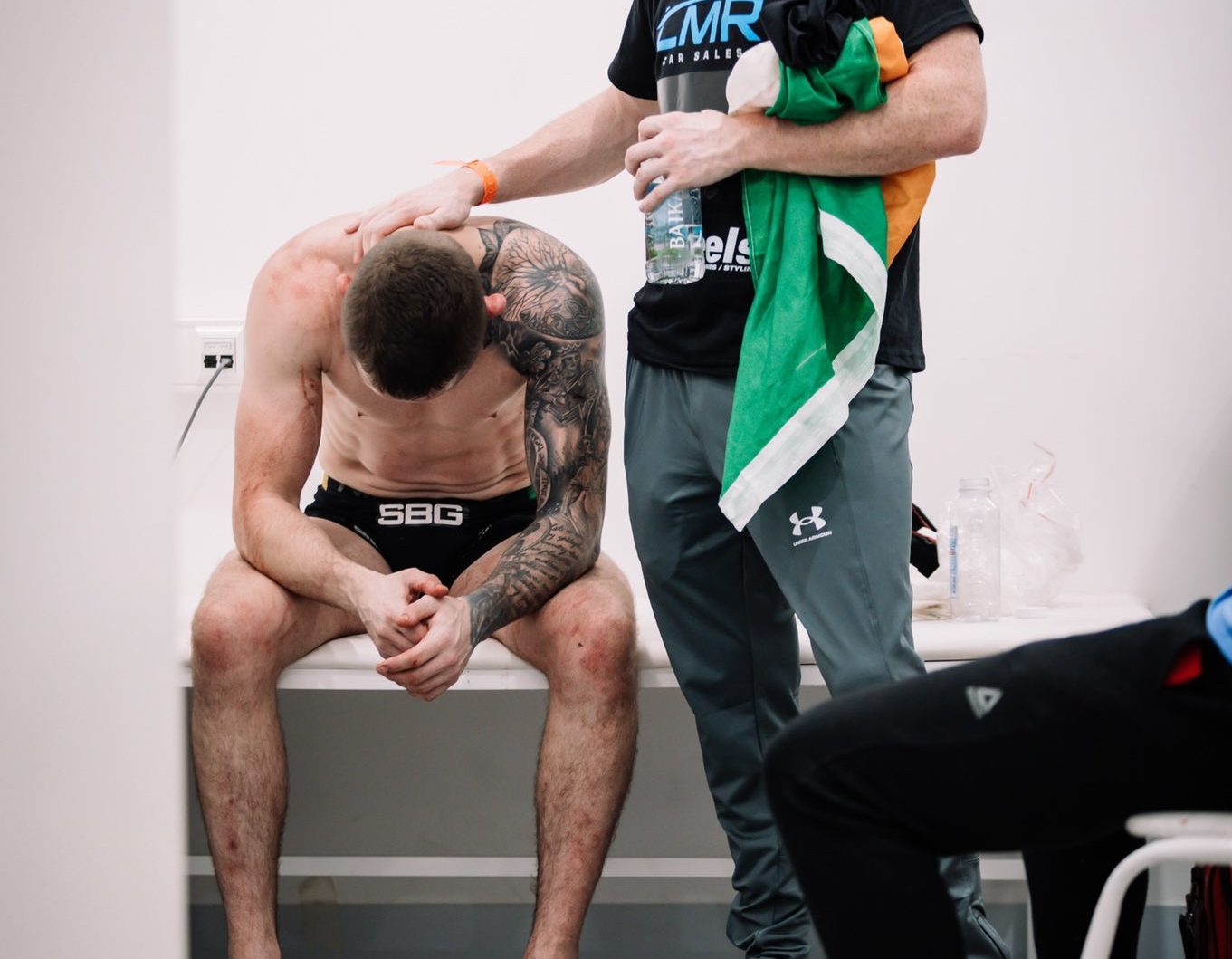 It was the first time Moore had ever experienced anything like it. He was well used to dealing with a certain level of anxiety and mental struggle in the lead up to fights, but never to this extent.

“I would go through bouts of being very anxious, moreso anxious than depressed. It would intertwine with fights because when you’re coming up to such a big contest you want everything right. If things don’t go right, you get more anxious and of course if you’re going to fight a man, there’s a lot of anxiety around that.” Moore explained of his prior experience.

“If I can handle my anxiety during camp, I put in better camps. I’m not so stifled, I’m not so on edge. I feel like that has stifled me before.” he continued.

This time, it was clear that Moore had come out on the losing end of both the fight and his mental battle. After losing to Mikhailov and finally coming to terms with his emotional state after a post-fight phone call home to his wife, Moore realized that he needed to finally take action and speak to someone about what was going on within.

“The way I felt in the lead up to the fight, and the way I felt in Russia, I made my mind up that when I got home I was going to see a therapist to talk about these things” Moore shared.

“One thing that people said to me after the fight is ‘if only you had ten more seconds, you would have finished him’. Perhaps, but I guarantee you if I did, I more than likely wouldn’t have went home and rang a therapist.”

Three months on, as Brian Moore prepares for his next fight against Jornel Lugo at Bellator 275, he doesn’t consider himself a changed man, but he is in a much better mental space.

“It’s been a learning curve. I’ve been doing a lot of work, and I feel fantastic for it. I’m proud of myself for doing it, because it took me a long time to do. But I’ve embraced it, and I feel like I’m doing very well.”

While he doesn’t have all the answers when it comes to his mental health, Moore has no regrets, and it isn’t just his fighting career that is being positively impacted by the work he has been doing with mental health professionals.

“All I do know is right now I’m in a better place than ever, and I’m so glad of that. I’ve always been a really good Dad. I pride myself on being a really good, active, interested father, and how could you not be with the two girls that I have, but I feel like I’m much better now again. I feel like I’m a better husband, a better person, a better friend. So, I don’t have regrets with what happened.”

“I’m glad I made that step finally, and the only regret I have is not doing it sooner”

After 4 long years fighting overseas, Brian Moore will make his long-awaited return to fight in front of an Irish crowd, refreshed and rejuvenated. The SBG Ireland stalwart will face Jornel Lugo on Friday, January 25, inside Dublin’s 3Arena at Bellator 275. All going to plan, that will hopefully be the only fight on his hands this time.

For family and flag.