On June 5, 2022, after a three-year hiatus, the IBJJF World Championship returned to the famous Walter Pyramid in Long Beach, California. The event did not disappoint, as the tournament featured elite grappling talents from across the globe, all looking to capture the title of World Champion. The blue belt division has always been a highlight attraction of the tournament, which gives viewers a sneak peek of future stars and new generational champions of the sport.

With four victories, three submissions, and not a single point scored on him, the Blue Belt Superheavyweight World title was captured in dominant fashion by PSF/ Triangle Academy competitor Blake Brown. Hard work, preparation, and self-belief play a critical role in accomplishing a goal, as Brown’s victory at Worlds proves just that.

Why was becoming a World Champion important to you?

Most goals in Brazilian Jiu-jitsu can’t be accomplished without a strong support system. What makes the training and support at The Triangle Academy a special place?

Blake Brown: Clay gives me every resource I need to be a champion. He is constantly checking in on me and all the other athletes at Triangle Academy to see if there is anything we need from him. The biggest benefit of his academy is that he competes with us. Having a professor leading from the front by competing at an adult black belt makes everyone in our academy better. It gives us someone to look up to, and we know everything he teaches works because he uses it against people at the highest level.

You are a nurse at St. Thomas Hospital in Nashville, TN. How were you able to balance the task of a taxing job position and stay committed to training for a World Championship event?

Blake Brown: Last December, I switched to Triangle Academy because I knew that’s where I needed to be to get the training to become a champion. As a nurse, my schedule is demanding but regimented, so I was able to come up with a routine that worked for me.

So what was your typical training schedule preparing for Worlds ?

Blake Brown: My typical training schedule from December to Worlds in June was the same week to week. Although I would work long 12.5+ hour shifts at the hospital Wednesday, Friday, and Saturday, I made the time. Sundays, I would do an hour and a half-open mat at my old gym, followed by a two-hour competition class at Triangle. I would lift, drill at Triangle for an hour and twenty minutes on Monday, Tuesday, and Thursday with Clay and two other guys, then go with them to a gym to do conditioning work for half an hour. After that, I would go coach wrestling at a local high school, followed by an hour of live sparing at triangle academy or another local gym at night. In terms of mental preparation, Clay has played a major role in getting me to the right headspace. He just kept telling me that he didn’t think there was anyone in the world-blue or purple belt that could beat me as long as I went after them and played my high pace game the entire match. 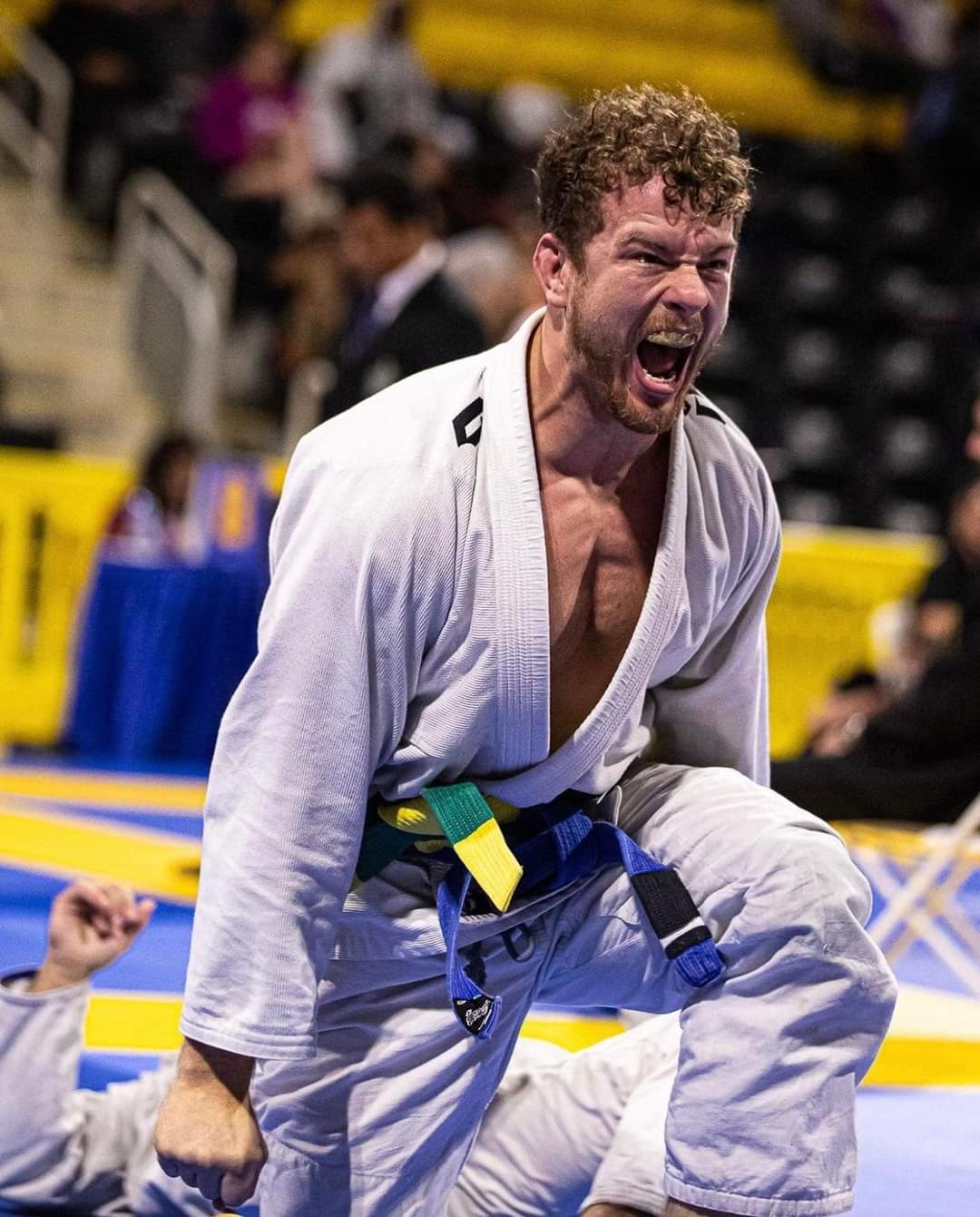 During your advancement in the rounds, was there any point where doubt or fatigue crept in, or a sense of excitement you were moments away from accomplishing your goal?

Blake Brown: There was never any doubt. My first opponent, I took down, and Darce choked in about 40 seconds. Going into my second round, my opponent was a Brazilian national champion, and I knew that would be my hardest match. After I beat him 4-0, I was confident I would win a world title. In my third match, the second I connected my hands for the Darce choke, I knew that I had won that match. In my finals match, I had a very strong powerlifter who also wrestled in high school. I knew that if I constantly attacked him the entire match, something would stick, and I eventually took his foot home with me in a straight ankle.

What is the most gratifying part of accomplishing your goal of becoming a World Champion?

Blake Brown: After winning, I just got a sense of relief. Going into it, I knew I was my academy’s best chance at winning a world title. During the tournament, I watched many of the Daisy Fresh guys that I’ve trained with and never seen lose get knocked out of the tournament. This made me feel like I needed to do it for both schools. I was very happy that I could win this title for them too. It was satisfying to feel like I had accomplished this goal for myself or Triangle Academy and all the Pedigo guys I’ve trained with.

Blue Belt World Champion, what is next for Blake Brown?