“Brutal” Brendan Barrett has been a competitor throughout his entire life.  He was a collegiate wrestler, is a black belt in judo, and is the former heavyweight champion at Ring of Combat, which is one of the most successful regional MMA promotions in the United States based out of Atlantic City, NJ.  Always looking for a challenge, Barrett decided to go for it as he packed his bags and moved to California to pursue a professional boxing career.

Barrett got off to a 7-2 start with 5 KO’s.  He accepted a fight at CES Boxing on February 23 against Joe Cusumano (17-2 …15 KO’s) to be held at the Twin Rivers casino in Lincoln, Rhode Island.  It was a decision that has left Brendan is disbelief and disappointment after the fight turned into something he had never experienced.

After nearly a month of sitting in his home alone, going through trying emotional and mental times, Brendan Barrett is opening up and telling his side of the story for the first time.  He has witnessed several reports written, which he has disagreed with and also seen some stories that were closer to the truth, disappear. You must listen in below to the full interview to hear this crazy sequence of events. Brendan believed that the fight had numerous unfair incidences throughout the bout. In the sixth round, Barrett felt that the fight was prematurely called to a halt. That’s when the ruckus ensued. He tells MyMMANews…

“After the fight was stopped, as I’m talking to the ref, I see from the corner of my eye, a fist come flying right past my face.  I’m standing there  saying what the heck was that?  It turned out to be a guy named Rich Cappiello, who then stumbles and falls down the steps to the ring.  Then the promoter, Jimmy Burchfield Sr. was standing right in front of me and cocks back and punches me straight in the mouth.  I’m standing there saying what are you doing?  He cocks back and hits me again.  Now I’m really confused and he cocks back and hits me a third time before people finally came over there and broke it up and now this guy Rich comes back and swings at me again.  At this point, the place is just insane.  I can’t even describe this feeling.  I’m still trying to wrap my head around it.” 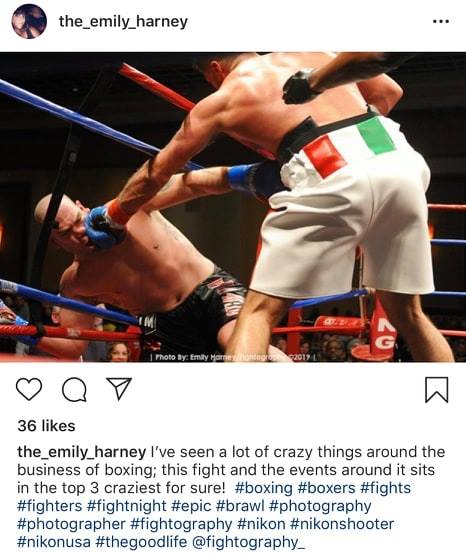 Lincoln police officers jumped into the ring along with security from Twin Rivers Casino. Burchfield Sr. was charged with misdemeanor simple assault, according to court records. Cappiello, of Abington, Massachusetts, was charged with misdemeanor disorderly conduct, police said. Both were released on their own recognizance, court records show.  Police also said that video (some on social media) would be reviewed to see if charges would be added or amended.

See videos from Steve Domenico below:

LISTEN TO BRENDAN BARRETT BELOW: