BOTH WORLD TITLE FIGHTS OFFICIAL FOR ‘BELLATOR 145: WITH A VENGEANCE’ LIVE ON SPIKE 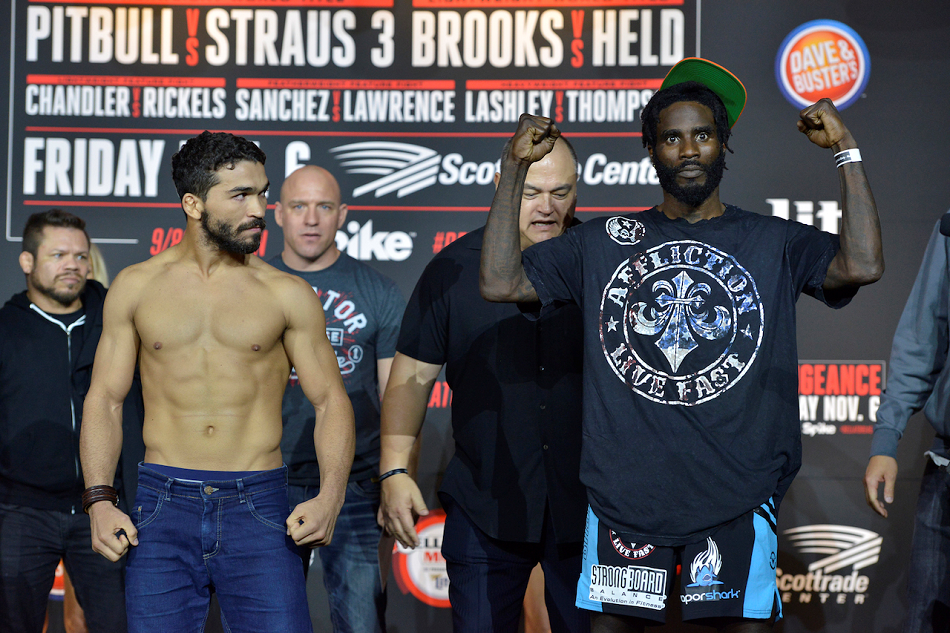 Friday’s “Bellator 145: With A Vengeance” event has received tons of support from all over St. Louis, and that continued when Louie the Bear from the St. Louis Blues and Rampage of the St. Louis Rams joined the festivities of tonight’s weigh-ins. The two squared up against one another (video here) before returning to the stage as hometown fighter Michael Chandler’s cornermen (video here). You can watch the weigh-ins in their entirety here.

“Bellator 145: With a Vengeance” features two world title bouts. Patricio “Pitbull” Freire (24-2) defends his featherweight strap against Daniel Straus (23-6) and Will “Ill Will” Brooks (16-1) meets submission specialist Marcin Held (21-3), with the 155-pound belt on the line. The event will also feature a trio of Missouri natives with Michael Chandler (13-3), who fights David Rickels (16-3, 1 NC); heavyweight Bobby “The Dominator” Lashley (13-2) who looks to avenge a previous loss on his record when he finally meets James Thompson (20-14) in a rematch; and Justin Lawrence (8-2) who meets Emmanuel Sanchez (11-2).

Tickets for “Bellator 145: With a Vengeance,” which start at just $30, are on sale now at Ticketmaster.com and at the Ford Box Office at Scottrade Center. Doors for the event open at 5:00 p.m. CT local time, and the first contest takes place 45 minutes after.

Below are the complete results from today’s weigh-ins which took place at Ballpark Village in The Gateway City.