We have a truly epic main event this Thursday at Bellator 253, where former Bellator Bantamweight Champion Darrion Caldwell faces one of the hottest prospects in all of MMA, combat sports legend Antonio McKee’s son, AJ McKee. 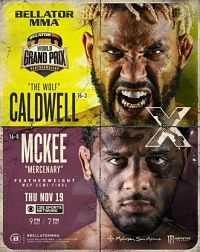 This is a semi-final match up of Bellator’s featherweight gran prix, as both talents won the opening and quarter-final rounds. They’ve both been about as dominant as they possibly could be throughout their careers, it’ll really be something to watch this fight unfold right in front of us.

Both Caldwell and McKee have spent most of, if not all of their professional careers under the Bellator banner. Caldwell’s first three fights took place in the LFC (now LFA), with his last 15 taking place in the Bellator cage, while all 16 of McKee’s fights have been with the Bellator promotion.

They both had instant success, but first, we’ll start with Darrion Caldwell, because he’s been fighting almost three years longer than McKee. After going 3-0 in LFC, Caldwell quickly won six-straight fights within two years of joining Bellator, improving his record to 9-0.

He was then submitted (guillotine choke) by Joe Taimanglo at just nine seconds of round three in a fight he was dominating. He just got careless and left his neck out there without tucking his chin. Caldwell ended up having an immediate rematch with Taimanglo, and defeated him via unanimous decision. 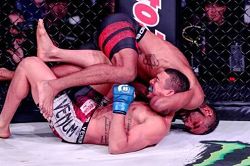 Caldwell then defeated Eduardo Dantas via unanimous decision to capture the Bellator Bantamweight Championship, before defending it against Leandro Higo via submission (guillotine choke) in round one.

He then made the move up to 145 lbs to face UFC veteran, Judo and BJJ black belt, Noad Lahat, who he defeated via KO (punches) in round two.

Caldwell then went over to Rizin for one of Rizin and Bellator’s cross-promotion events and faced former UFC flyweight title challenger Kyoji Horiguchi for the Rizin Bantamweight Championship, a fight he lost via submission (guillotine choke), this one also in round three.

This was only his second loss to date, and also his second third round guillotine choke defeat. This time he wasn’t even facing a grappler. He controlled most of this fight with his wrestling, but once again got too confident and left his neck out there for the taking. 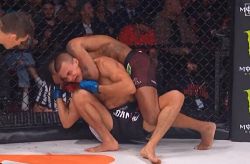 This was also followed up by an immediate rematch, this time it took place in Bellator and they were fighting for Caldwell’s belt.

Caldwell controlled most of this fight with his wrestling as well, and while he wasn’t submitted or finished, he didn’t do anything on top. He merely held position, and he lost the fight via unanimous decision, and lost his belt considering.

This brought his record to 13-3, and he felt the need for a change. His energy levels were never the best having to cut to 135 lbs, so he decided to enter himself into the Bellator featherweight gran prix, where he’s given another 10 lbs, aiding him in not gassing out.

Since moving up, Caldwell’s been perfect thus far, going 2-0 in the featherweight tournament, defeating the likes of Henry Corrales (unanimous decision) and Adam Borics (rear naked choke), improving his record to 15-3. 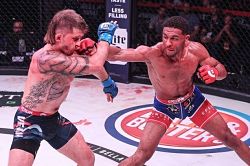 AJ McKee has been perfect thus far into his mixed martial arts career, going 16-0 in 16 fights, which is pretty insane when you look at all the opponents he’s had. Now, he didn’t start fighting elite level competition until a couple years ago, but his record isn’t padded.

The first real name he got would probably be Justin Lawrence, The Ultimate Fighter 15 veteran. 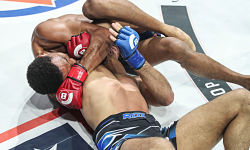 Oh, Lawrence also placed in multiple state championship tournaments in wrestling while he was in school, having started as a third grader, and he KO’d James Krause on The Ultimate Fighter when he was just 21-years-old, who’s a welterweight that’s fought as high as middleweight, and is an elite talent in his own right.

Though Lawrence’s leg eventually got injured in his fight with McKee, McKee won all three rounds against him.

It’s too bad, we all thought Lawrence was the next big thing, like a soon-to-be future UFC champion. He just hasn’t been able to live up to the hype. McKee however has lived up to every bit of hype he’s gotten, and he followed up his victory over Lawrence with a first-round KO (punch) victory over John Teixeira, doing so in just 69 seconds.

McKee is a very well rounded, very knowledgeable talent. He’s a youth beyond his years, and he has his father to thank for that. He got some of the best MMA instruction from a young age from someone who went 30-6-2 as a professional in the sport.

Actually, his father went 29-6-2 up until last year when he had a one-off comeback and fought on the same card as his son. Caldwell on the other hand has wrestling to thank for his base in this sport, along with the success he’s had in it. 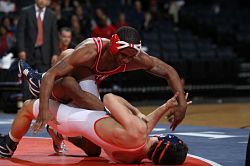 Caldwell lettered in three sports in high school, but wrestling is what he was the most successful at. By the time he was out of high school, he was a three-time state champion with a completed record of 146-4.

Three of those defeats came in his first year as a freshman, just imagine how dominant he was in those last three.

Still, three losses in a season of wrestling is pretty damn good. As a freshman in college, he had a record of 20-6 and was named the ACC Wrestler of the Year, as well as Rookie of the Year. 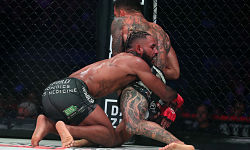 Top that off with being a two-time NCAA Division I All-American, Caldwell is one of the best wrestlers the sport of MMA has ever seen. McKee is going to have to stay off his back in order to win this fight, or so we think.

After a dominant round one and a dominant start to round two for McKee in his last fight with Derek Campos, he spent the rest of that fight on his back. Campos isn’t an elite wrestler by any stretch, he’s good at it, but not like Caldwell for instance. 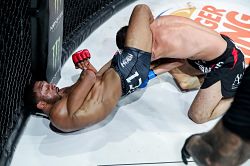 Luckily, McKee has a pretty wicked guard and was able to get the armbar finish in a scramble 68 seconds into round three.

As you see above, and by watching a couple of Caldwell’s fights, he’s been submitted before. McKee should have been working both his takedown defense and his guard extensively for this camp.

Caldwell should have been working his takedown offense, striking, submission defense, and offensive ground work for this fight. His striking has gotten better, but it’s not at the level of McKee’s. Maybe he if gets McKee thinking about the takedown he can open up with it, but he’s gotta be active once he gets the fight to the mat.

That’s been a problem throughout Caldwell’s career, he doesn’t do much once he has his opponents down. Sometimes he’s able to submit them, and others, as mentioned above, he merely controls them without inflicting any damage. 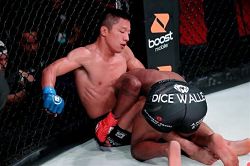 He needs to work on that. He can’t afford to be stood up after expending a good amount of energy on a takedown, because he’s also shown endurance issues in the past.

Let’s hope that issue stayed at bantamweight. Lastly, he needs to be weary of McKee’s submissions once this fight hits the mat, or it could be a short night for him.

It’s worth noting their first two tournament fights were scheduled for three rounds, and this is the first five-round fight of the tournament for each of these men.

This is one of the best match ups in Bellator history! Watching Caldwell melt right through Adam Borics in the opening round, and then dominating Henry Corrales, both of which defeated Aaron Pico, we see the featherweight division is where he belongs.

Both of these talents have potentially the toughest fight their career has seen in this bout, it’s going to be a good one!

Who wins this Bellator featherweight tournament semi-final match up? 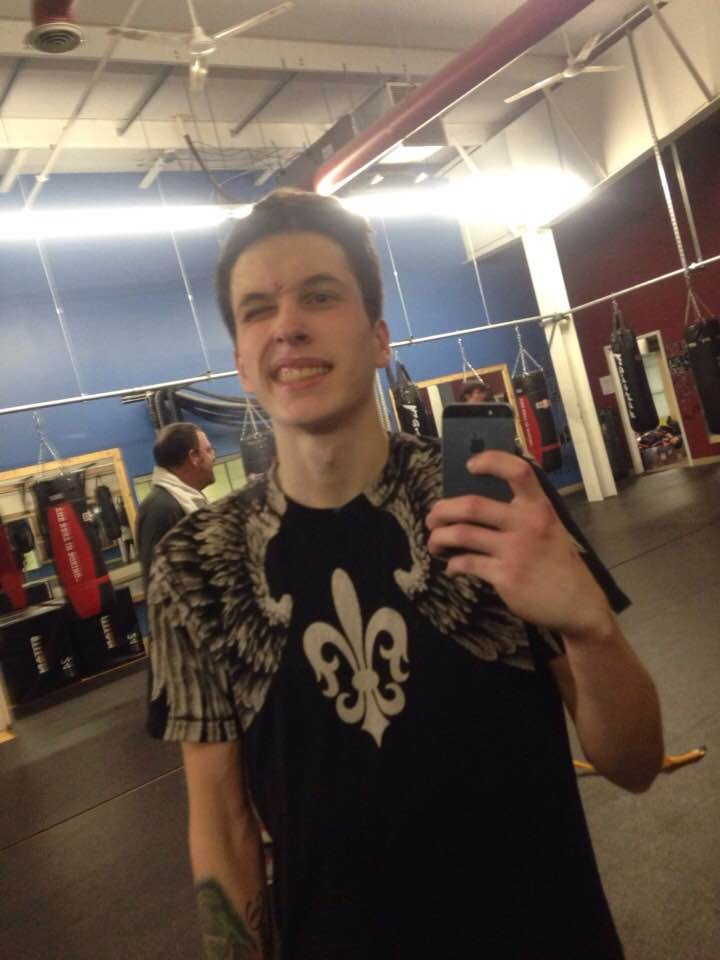 By Drake Riggs 54 mins ago

Chance Rencountre looking to get back to UFC, “slim pickings” on the regional scene

By Joe McDonagh 9 hours ago