Advance tickets for KnuckleMania 3 starting at $45 are Now On-Sale and may be purchased online at BKFC.com. The Tingley Coliseum is located at 300 San Pedro Drive, Albuquerque, NM. Doors will open on the night of the event at 6:00 p.m. local time. KnuckleMania 3 will also be broadcast internationally on the New BKFC App and is sponsored by Only Fans, Crescent Tools, LIONS NOT SHEEP, Nerd Focus Energy Drink, Global Fight Token, and Knockout Gummies.

“We’re planning the biggest night of combat sports in the history of New Mexico and are beyond thrilled to announce this cross-state battle between the two biggest stars from this extraordinary fighting state,” said David Feldman, President of BKFC. “Austin and Diego are two of the most successful fighters in the history of New Mexico and their fight at KnuckleMania 3 is the perfect complement to the BKFC Light Heavyweight World Title clash between Lorenzo Hunt and Mike Richman.”

“Also, just finalized this morning is a sensational flyweight fight between John Dodson and Jarod Grant. Dodson was amazing in his first BKFC fight last August in Albuquerque and Grant is a former BKFC World Champion who can’t wait to fight for another world title.”

“Tickets are moving very well since they went on-sale last week and we’re going to have many more huge fight announcements in the coming days.”

The Las Cruces, New Mexico born and raised Austin Trout has compiled a professional boxing record of 35-5-1 with 18 knockouts over his illustrious career. The southpaw is best known for his WBA Junior Middleweight Championship victory over Puerto Rican Legend Miguel Cotto on December 1, 2012 at Madison Square Garden. The dominant win was followed by a hotly contested, controversially scored decision loss to Mexican Boxing Icon ‘Canelo’ Alvarez on April 20, 2013 in San Antonio, Texas.

Diego Sanchez is a lifelong Albuquerque, New Mexico resident from the acclaimed Jackson Wink MMA Academy. He first burst onto the national MMA scene by winning the first season of The Ultimate Fighter, defeating Kenny Florian in the main event. A black belt in Brazilian Jiu-Jitsu and Gaidojutsu, Sanchez has compiled an MMA record of 30-14 with ten knockouts.

Among Sanchez’ accolades in the UFC include; 2009 Fight of the Year vs. Clay Guida, Seven-Time Fight of the Night winner and most decision bouts in UFC history (21). The fight against Trout will be his first hometown bout since June 2014.

Following an illustrious career in the UFC, John Dodson, displaying his world class hand speed, knocking out fellow UFC veteran Ryan Benoit in the first round at BKFC-28 on August 27, 2022 thrilling the sold-out crowd of local fans in Albuquerque.

Jarod Grant is looking to jump back into the win column and re-start his march to a BKFC World title. His last bout against Reggie Barnett was disappointingly stopped when he suffered an accidental eye poke in the fifth round. Prior to the Barnett fight, the all-action Grant had won five fights in a row, four by knockout.

Further details on KnuckleMania 3 will be announced shortly. 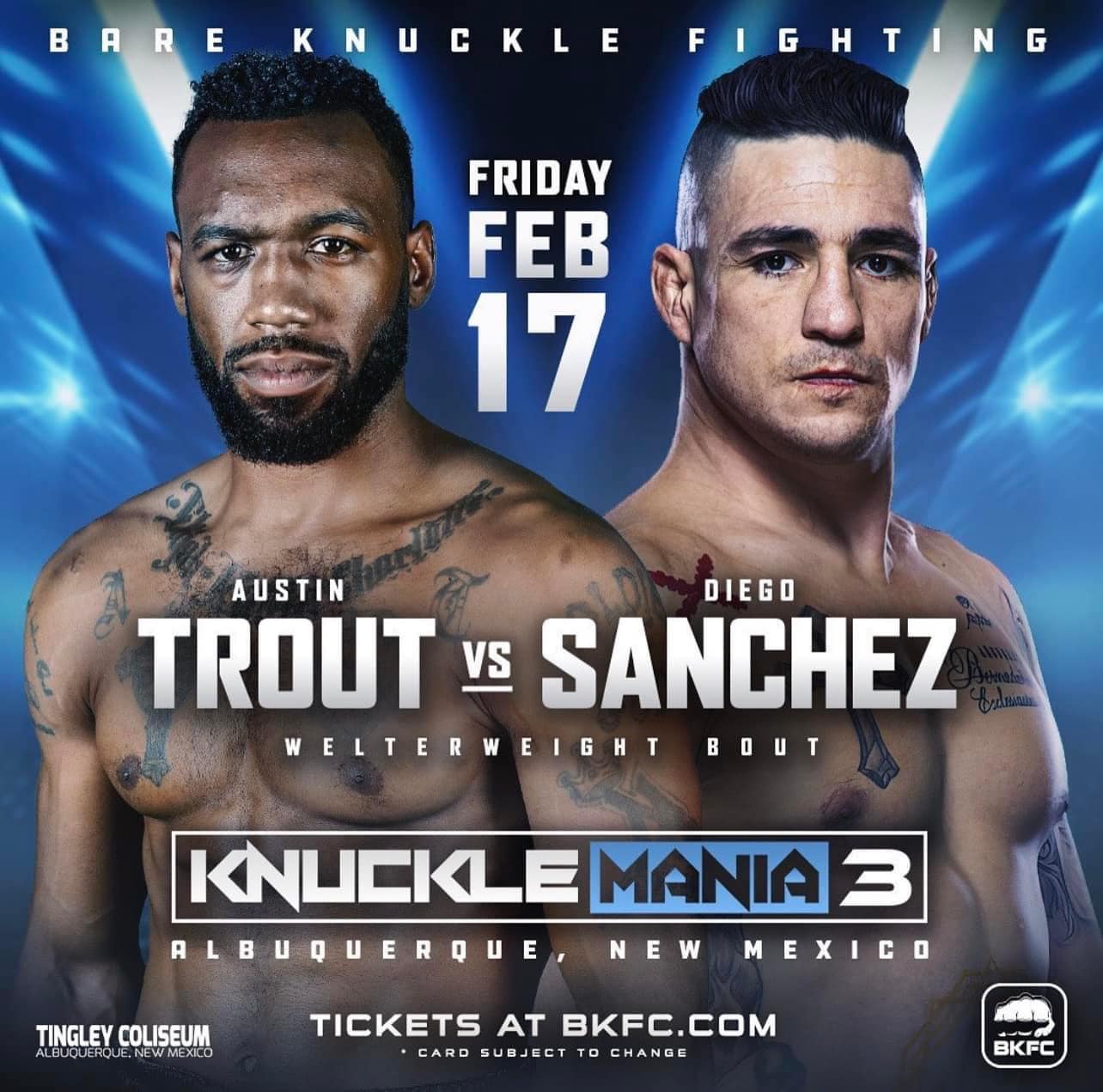