Titan FC 69 features a showdown of two of the best welterweight prospects. Dilano Taylor takes on Carlos Matos for the welterweight title. With Titan being one of the best prospect leagues for the UFC, a lot is on the line. With a win, either can get that short notice fight call from Sean Shelby.

Dilano Taylor wasn’t one of those fighters that grew up idolizing fighters of yesterday and always wanted to fight. While he did wrestle in high school, it was not an end game for fighting. His start happened when he was trying to stay active and one his coaches threw him into the deep end.

“I’ve always liked to be active and doing stuff,” says Taylor. “But for the first few months I just got beat up. I didn’t have the notion to fight. I didn’t even think I was found to fight. I was training one morning and my Jiu Jitsu coach walked in and told me he got me a fight and lights. He says to me, ‘You scared?’ And I’m like scared? Who does this man think he is.”

That first amateur fight really got its hooks in to Taylor. It took him being punched that first time to actually realize what he was in for. But when he did, all hell broke loose in Dilano Taylor.

“My Jiu Jitsu was okay, my grappling was pretty solid. But not my striking. I got punched one time and I was like, ‘Oh, we’re really fighting.’ Something in my head just clicked. I took the guy down and choked him out in a minute.”

Dilano Taylor: Growth From A Loss and Titan FC 69

With a 5-1 record, Dilano Taylor isn’t perfect. But they loss is necessary for any up and coming prospect. It puts things in perspective and makes them a better fighter. For Taylor, he feels that fight was his most important.

“If I want to be honest, I feel like that made me. You never know how good you are or how bad you are until you have a traumatic experience.”

The start of a fighters career is the Wild West. With matchmaking looking to get the best for fighters on both sides, Taylor realizes his mistake and gives all the credit to his hubris.

“I wasn’t thinking it wasn’t a good fight for me at that time. Realistically speaking on paper, it wasn’t a fight to take that early in my career. I took that fight out of pure cockiness. For that fight I feel like I put in too much work that was super necessary for that fight. That loss made me what I am now. I understand I have to focus what I need to focus on.”

Taylor takes on Matos in the main event. Matos is 8-0 as well. But this isn’t the first time Taylor is fighting a more experienced fighter. He insists that when he gets in there, the record doesn’t matter. The skills do.

“Their records don’t match me. I’m fighting these guys, not their records. But when they get in and feel my physical presence, they understand I’m not playing around. The goal is to go into the fight and win with as little damage as possible.”

With the strap on the line, Dilano Taylor is looking to prove himself to the world that he can be one of the best. With a win, he can do just that. 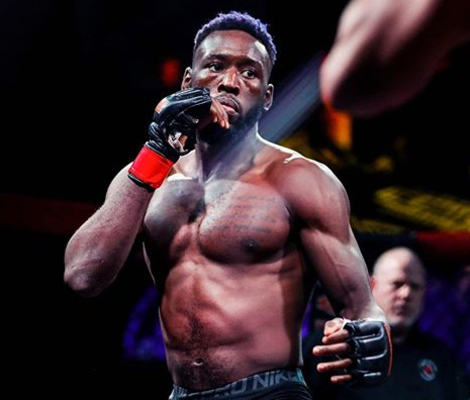 By Brady Briggs 24 mins ago

By Lenny March 30 mins ago

By Lenny March 34 mins ago