The stereotypical immigrant success story is when parents bring their children to the states, they do well in school, go to a good college and get a well-paying job or open a medical or law practice. Dmitry Gerasimov’s success story is a little bit different. The 34-year-old was born in St. Petersburg, Russia and moved to Minnesota when he was young and then to Los Angeles almost 16 years ago. He didn’t go to college but worked in the video game industry instead, including a long stint at Electronic Arts (EA) before leaving the industry to work in mixed martial arts and fight as well.

Gerasimov initially started training in Tae Kwon Do as a kid and was competitive. But he stopped training when he went to Los Angles. After several years of not training or doing much physical exercise, Gerasimov found himself out of shape. He mentioned to his wife (then girlfriend) that he missed training and she bought him a 30-day pass to a gym for his birthday.

From overweight desk jockey to pro MMA fighter. Credit goes to my journey at Systems Training Center and all of the inspirational people I met along the way. Fitness is a journey but not one you have to go at alone. Hit me up if you're interested in training for fitness or develop as a martial artist! #stc #systems #systemstrainingcenter #mma #fightlife #fitness #fattofit #motivation #transformationtuesday #tt #life

He showed up for the first time and he truly realized how out of shape he was.

“I remember showing up my first time, I did the warm up and I was dry heaving in the bathroom being like f**ck this, not for me! But I stuck it out.”

“Over the years I kinda was half assingly training, off and on, and two of my friends started fighting, some of my OG training partners like Terrion Ware, who is in the UFC right now. They all started training after me and started fighting before I did. From the first day I walked in the gym and the coach asked me what do you want to do, are you doing this for fun or do you want to fight? I said I want to fight and I kept putting in on the side, push it off to the side and eventually decided to get my shit together and started training for a fight. I had my first amateur fight when I was 27 and it led to another.”

But it wasn’t supposed to lead to anything, it was only supposed to check something off his bucket list.

“I actually wanted to do a fight like a bucket list thing, said hey, one and done, then I won and had so much fun with it.”

At that time, he was laid off from his position at EA and was working small jobs, it didn’t take long after to go all in on fighting. It hasn’t necessarily been fighting itself that has become his career, Gerasimov is the general manager of his gym, Systems Training Center. Even though he may not make as much as he did previously, MMA has led him to happiness and is helping accomplish a major goal of his.

“I wanted to have stories for my grandchildren. It’s equivalent to death for me is that to grow up, to have my children and my grandchildren and not look back on their own family and think, man I come from something, I don’t want to toot my own horn but something extraordinary, something a little bit different, a little above the norm. And this was my route, this the opening that I found to do that.”

To reach that goal, Gerasimov hasn’t taken easy fights. He has fought the likes of A.J. Bryant, Chinzo Machida and Mike Segura. It has led to a lot of exciting fights but also a few losses as he sports a 9-6 record. 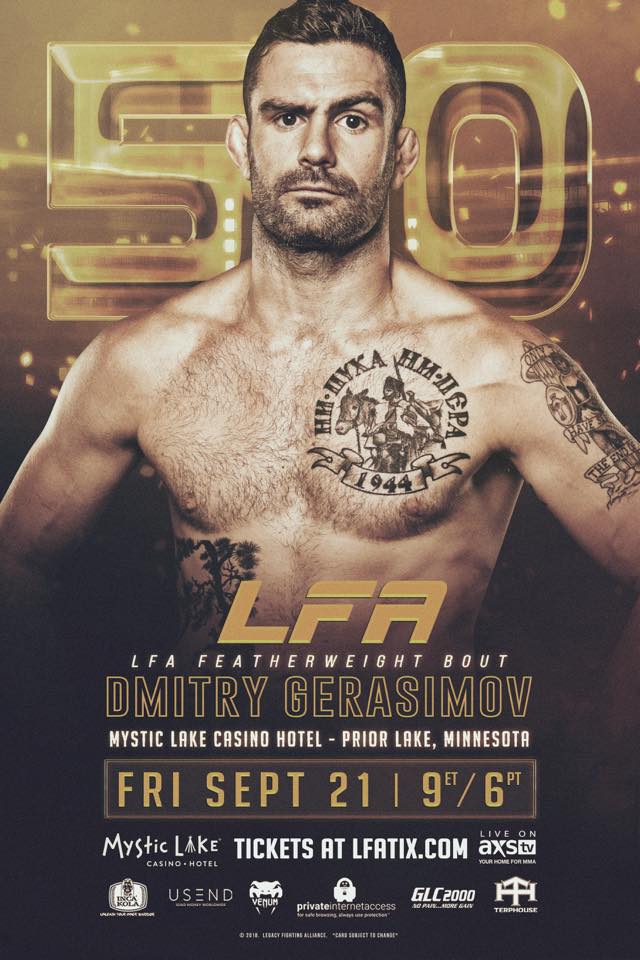 On September 22, the featherweight fighter currently living in Los Angeles will continue his career of facing tough opponents when he faces Josh Marsh at LFA 50 in his home state of Minnesota. Marsh is 4-1, trains out of Roufusport Academy and is nine years younger than Gerasimov. But Gerasimov wouldn’t have it any other way.

And he believes this fight is a perfect indication of that.

“Perfect example of how I don’t take easy fights, I don’t fight cans. They gave me a main card fight against a guy that’s ranked – last time I checked Tapology he was number to if not the number 3 in Minnesota.”

With a few losses on his record, Gerasimov knows the UFC or Bellator are most likely not calling him after this fight. He would like to fight for them one day, but is also fine if it never happens.

“If I get the call sure, if not, I’m ok with it too. I’m taking it one fight at a time. I’m enjoying the training and the sport for what it is.”

But he is excited for his upcoming fight and expects not only a win, but a first-round finish and maybe adding to the four D’Arce choke submissions he already has.

“I think I’m just a better fighter, a more complete fighter than him.”