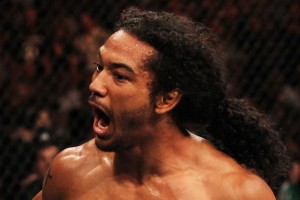 Former UFC and WEC lightweight champion Benson Henderson has announced that he has officially signed with Bellator MMA, rival organization of his longtime employer, the Ultimate Fighting Championship.

I’d like to officially announce my move over to Bellator MMA.

I’m beyond excited for this next phase of my career, it’s a big move, like any move when switching employers or jobs after having worked somewhere for such a long time.

I have to thank the BigMan upstairs for putting some amazing people in my life, my wife (first and foremost) and a lot of truly smart and insightful people behind the scenes who helped make the connections and negotiated this deal to bring it to fruition.

I’d be remiss to not thank Dana White and Lorenzo Fertita for the opportunities they presented me, you guys have helped me change my life for the better and to be able to provide my family with the things I didn’t have while growing up. For that I’ll always have the utmost appreciation. Thanks for all the advise you guys gave too, both business wise and personal.

And last but not least, to who it is I think of when I think of the UFC! Everybody behind the scenes who I personally dealt with every time I reported in or had to do something. Mayra, Melissa, Dave, Chris, Nick, Tracy, Joanie, Maura, Tony, Heidi, Ryan, James, Dave, Kaia (sp.???), Burt, Rob, Rudy, Stitch, House, Mike, Susie, Dean, Donna, Feryal, Sean, Joe, Brad, Jazzmine, Candice, Michelle, Reed, sorry I can’t name everyone or this list would go on for forever. There’s a whole ton of people behind the scenes who make that show what it is. You guys and girls are the ones who make that show great and allow us fighters to do what it is we love!!! Much love to you all and thanks for putting up with me for so long.

To my fans, thanks for all the love and support, I’ll keep giving you my all, opening up my heart and soul inside that cage. I’m excited for this next chapter and building new relationships with guys I’ve heard nothing but great things about like Scott Coker, Rich Chou and Mike Kogan.

Terms of the deal, as well as a debut date and opponent, were not immediately disclosed.