Metamoris is quickly growing into one of the top grappling organizations in the United States. Metamoris founder Ralek Gracie might feel that the next big step would be to sign their participants to exclusive contracts, which in turn would prohibit the competitors from grappling in other competitions. This also might cause a negative impact and turn off top grapplers from competing at Metamoris.

Garry “The Lion Killer” Tonon was the first to decline. Tonon was going to compete at Metamoris 6 until he was told that he must sign an exclusive contract. Tonon came out with an official statement and explained his reasoning behind why we will not be seeing the top grappling prospect from competing with Metamoris.

Tonon, the Brazilian Jiu Jitsu black belt under Tom DeBlass, has competed in many major grappling organizations, including EBI, ADCC, and Metamoris. Tonon is the current welterweight champion for EBI.

If more grapplers take a stance against the exclusive contract that Metamoris is attempting to have competitors to sign, there is the chance that it will do more harm than good to the promotion, losing out on matching the top grapplers of the world. Below is the official statement released by Tonon. 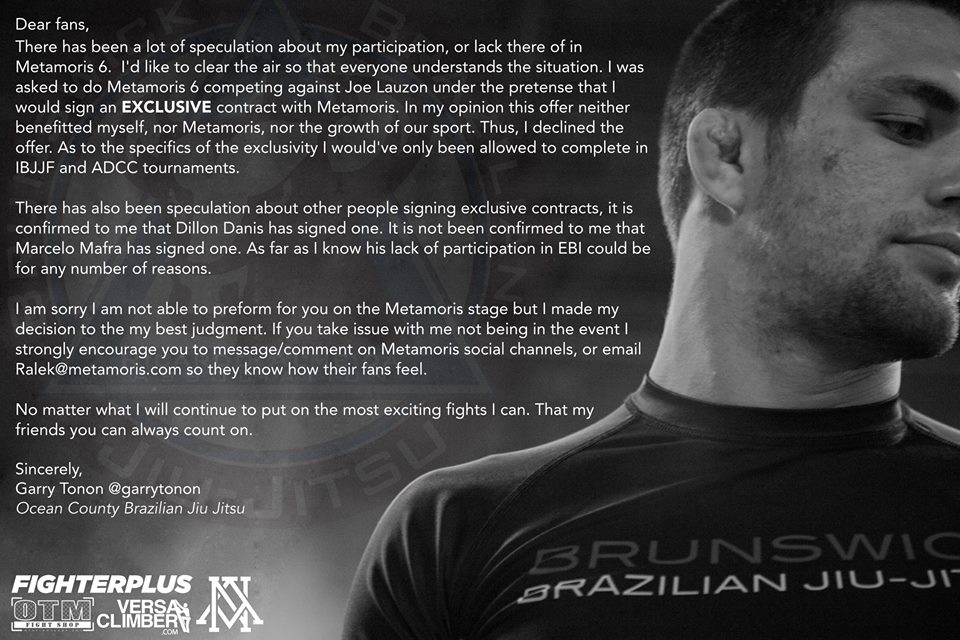 Statement from Tonon in regards to not competing at Metamoris

By Cole Shelton 10 mins ago