Art of War Cage Fighting made their Lebanon Valley Expo Center debut with AOW 14 last night and it was a win, win as the arena was packed and loaded with energy, and card was like an amusement ride.

There were very exciting moments  throughout the entire card as The Big Homie Justin Haskell, Ryan Nace and I called the action from cage-side. 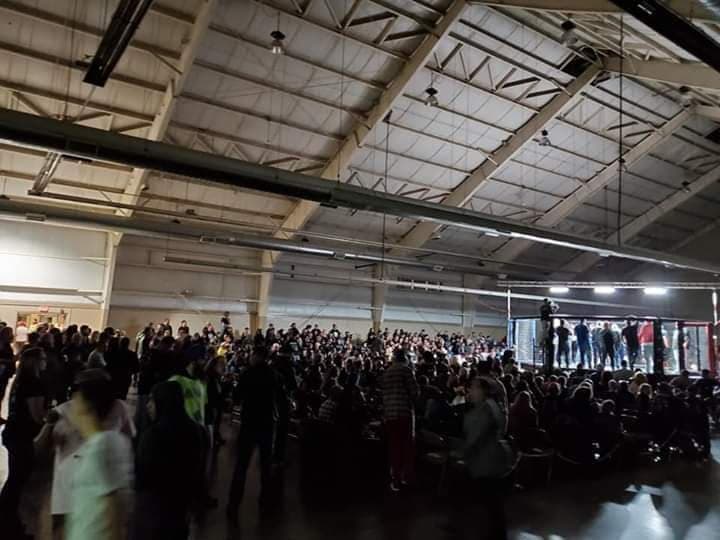 In the Main Event, B MO, Ben Moser sent his hometown fans into a frenzy with a tapout in the first round via RNC (3:28).  Moser had been the current AOW Amateur 135 lb champ and made his professional debut a memorable one as the chants of B-MO continued for a while.

In the co-main event, Drew Dickson took the AOW 130 lb from the defending champ, Anthony “Ammo” Cashera.  Ryan Nace said that Dickson reminded him of a smaller version of Clay Guida with the longer flowing hair.  Dickson was strong and explosive in round 1 and took Cashera down  and was in the dominant position for the majority of the round inflicting some hard ground and pound bloodying Cashera.  Ammo showed great heart to fight through the round and get to round 2.  In Round 2, Cashera landed a big punch early that rocked Dickson putting a nasty welt that swelled up around the eye.  Dickson recovered and eventually got the fight back to the ground and some more ground strikes ending the round on top.  Round 3 was again Dickson out-wrestling and scoring Ammo to give him his first career loss (5-1).  Drew moves to 7-1 and after the fight said…

“I feel that I’m ready for my pro debut. Anthony is a tough dude as you can see by this (pointing to face).  I was able to gather myself and get back to the game-plan that my coaches and I had put together.  I have never taken a fight with 3 months notice before so it was a chance to have a longer camp and get ready because I knew this was going to be a hard fought fight.”

Dickson just needs to heal up that eye and there’s no doubt that his next fight, he will be earning a paycheck for the first time.  He is a very nice prospect as well as Cashera who had to take some off after a family tragedy.  Cashera and his team will go back to work and I look forward to his return.

Christian “Strictly Business” Carr lost for the first time (4-1) as Shawn Stefanelli won the Art of War 145 lb title.  Grindhouse MMA’s Stefanelli used his wrestling and take-downs to win the split decision. There were a bunch of back and forth moments, reverses, and submission defenses.  Carr had Shawn in a reverse triangle early in round 2.  It took him a while to free himself, but Stefanelli worked out only to have to spin and weasel himself out of a slick arm-bar attempt from Carr.  In the third round, Stefanelli was again in the more dominant position for more of the round but there were a couple of times that Strictly Business had him mounted. Shawn was able to not only escape, but wind up back on top.  I have gotten to see several of Shawn’s previous bouts and this is the best that I have ever seen him look.  His body was more tone than ever before and his cardio was on point.  Justin Haskell has trained with most of the same team as Stefanelli and he attests to the vigorous camp put on by Matty Netterville, James Booth, and UFC fighter Shawn Brady along with numerous other fight team members.  Stefanelli goes to 4-2 and the hard work he has put in was clear on this night.  It was a terrific performance.

Dylan Harnish got the Knockout of the night when he landed a huge left to drop Matt Nicolls in round 2.  Nicolls did make it back to his feet, but Harnish smelled blood and never relented.  Referee Bill Bookwalter had to call a stop 1:30 in round 2.  Harnish, the 19 yr old prospect moves to 2-0 and said this afterwards…

“Right now I’m happy with my performance but I’m already looking at the Dec 7 th USKA card in Allentown and or the Art of War 15 card on December 13th.  I just want to continue getting better and working hard.  I told you that my hands would be the difference in this fight. All he has is grappling matches so my plan was to keep it on the feet and I knew it was over after that left.  Thank you everybody tonight who came out.”

“I’m going to take him down and submit him.  I’ve had plenty of grappling events and I’m not as nervous as I thought I may be in making my cage debut.  I felt great, ready to do my thing.”

It took the Juggernaut 1:38 into the 2nd round to finish Enrique Zavala by a head and arm triangle.  He was pretty dominant from the opening bell. We hope to see him again in there soon.

Marcus Hardiman is a name to put a check mark by. The 170 lb very strong wrestler, is evolving right before our eyes as he won his third fight using all of his skills.  I saw take-downs off of striking combinations, level changes, good defense, and a determined submission as he got the tap at 1:25 of round 3 vs Craig Myles.  Hardiman had a plan and he executed it.  Marcus is a talented prospect and a battler I love to watch.

Two heavyweights started the night and their careers as Ray Bolden and Bryan “Terror” Torres made their debut vs one another.  First round both guys hurt each other but Bolden recovered better and diligently fought off the take-down attempts from Torres.  Bolden landed some helacious body shots as he was against the cage and his opponent was engaged with his leg.  Torres also had a nice gash over from his eye as Bolden was very accurate and the quicker fighter landing counter punches.  He was waiting for Torres to throw and he was the smaller, and craftier fighter as the referee had to halt the fight in round 2 at 1:49 via TKO strikes.

Marine Corps veteran Tanner Leed got in the win column with a 2nd round rear naked choke submission at 1:49 of round 2.  Leed and Bilal Khan put on a very fun and entertaining 2 rounds.  Khan showed lots of toughness fighting out of the choke a few times, but Leed was persistent and finally secured it tight enough to earn the tap-out. 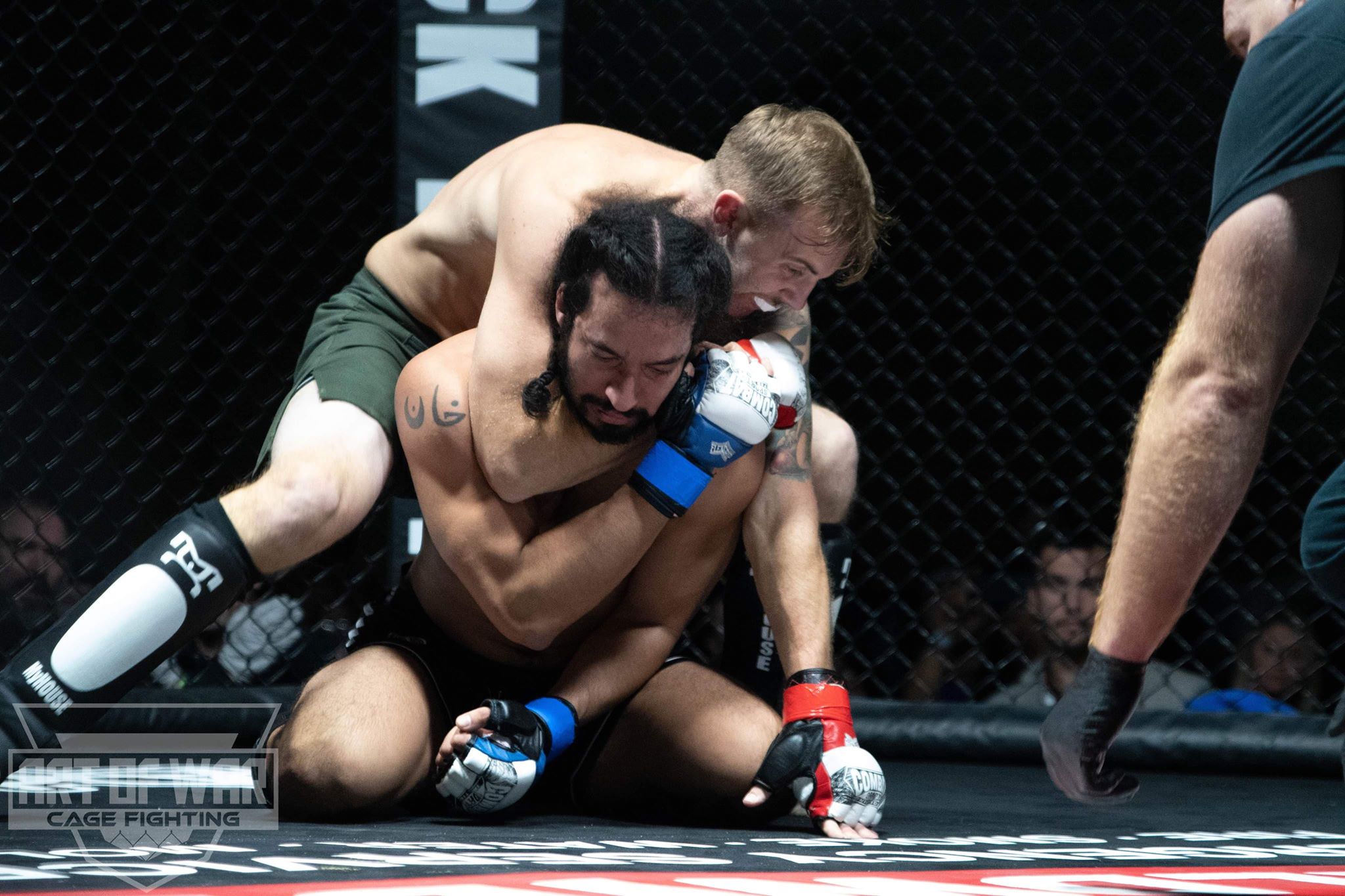 Fight of the night I gave to heavyweights Jason Manning and “Dark Shark” Cameron Chism.  These two guys laid it on the line for all 3 rounds. Chism did jack up Mannings face a little but Manning still was throwing and landing more frequently.  Manning did score a couple take-downs through the 3 rounds but Chism was able to avoid a ton of damage and showed a huge heart.  The majority of the fight was back and forth stand-up and both guys sustaining blows and trying to find more gas in the tank.  A pleasure to be there.

Art of War 15 returns on Friday the 13th of December at the 2300 Arena in South Philly as middle-weight blue chip prospect Andre Petroski (3-0) will fight for his first career MMA championship vs Shedrick “Chocolate Thunder” Goodridge. John “Bearcat” Brennan vs “Vicious” Timmy Tyler was also announced last night as Mike Bickings said the contract will be done very shortly. More fight announcements and interviews will be upcoming right here on the greatest combat sports website known to man.