The main event of the evening featured a matchup of two talented fighters, from the State of North Carolina, meeting on neutral ground in The Old Dominion.  Daniel “Smiley” Wilkins, of Saga Combat Systems (Lincolnton, NC) put his undefeated record on the line against Asheboro School of Martial Arts’ Isaiah Martin.  This bout was to decide the new TOC lightweight champion.  Martin, the taller, rangier fighter took no time in looking to put forth his dominance with his hands, which he succeeded in.  However, Wilkins, was successful in the striking as well, with some well-placed and high-volume low leg kicks.  At around the two-minute mark of the first round, scheduled for five, Wilkins was taken down.  Wilkins’s corner could be heard reassuring their fighter that he “was good here”.  No truer words were ever spoken as Wilkins quickly began looking for submissions from his back and worked hard in securing a triangle choke, trapping Martin’s arm.  Following a transition, from Martin, that saw him temporarily get out of trouble, Wilkins hooked the triangle back in, securing the arm and forcing Martin to tap with a mere 15 seconds left in the round.  The win secures Wilkins’ first amateur title and runs his record to a perfect 4-0.

The co-main event was a non-title lightweight bout between Ring Combat Sports’ (Wytheville, VA) Corey Brewster versus independent fighter, Scott Everhart.  Everhart had an impressive first round, largely controlling Brewster on the ground and subjecting him to some painful leg locks.  Both fighters clinched, early in the second round, and as the fighters broke away from the clinch, Brewster threw a punch that caught Everhart right on the button, knocking him out at the 29-second mark.  The walk-off shot made all the baseball fans in the house feel great, since baseball season ended earlier in the month.

The feature bout was for the vacant TOC featherweight title.  Deliverance Mpuati (Carolina Combat Sports) may have exerted more energy in his post-fight celebration than was used in the bout itself, against Dustin Garrett.  Garrett who came out firing early just didn’t have enough ammo to defeat Mpuati, who put on a great performance in front of his corner, which included the UFC’s Bryan Battle, caught Garrett with a right hand that lifted him into the air and saw him come crashing down to the mat.  It’s not clear if the punch, itself, knocked Garrett out or if the impact from hitting the canvas in a full horizontal position caused the KO, but regardless, it caused a stoppage at under a minute in the first round.

Other performances of note were Lewis Glover (The Foundry) defending his welterweight title, with a unanimous decision over Darren “Doomsday” Williams. Hannah Ross (Mastering MMA Institute) dominated April Cline with a round and a half of vicious uppercuts, scoring the KO of Cline, in the lone kickboxing bout of the night.  Sarah “She Hulk” Flowers pushed through some early adversity but ended Hailey Harkey’s night, in the first round, securing the TOC female featherweight belt.  Wyatt Joyce used a slick submission to win the vacant TOC Middleweight gold and Roland Mizell dethroned Chris Hamlett from the TOC Cruiserweight throne.   In what My MMA News called the fight of the night, Nyzaiah King outpointed Matt Justice, on two of the three judges’ scorecards, securing a split decision victory, in the third bout of the night.

My MMA News’ “of the night” awards are as follows:

Fight of the Night:  Nyzaiah King vs. Matt Justice

KO of the Night: Deliverance Mpuati

Performance of the Night: Hannah Ross

Submission of the Night:  Daniel Wilkins

The full fight card and results can be seen on the Titans of the Cage 32 event page on Tapology. 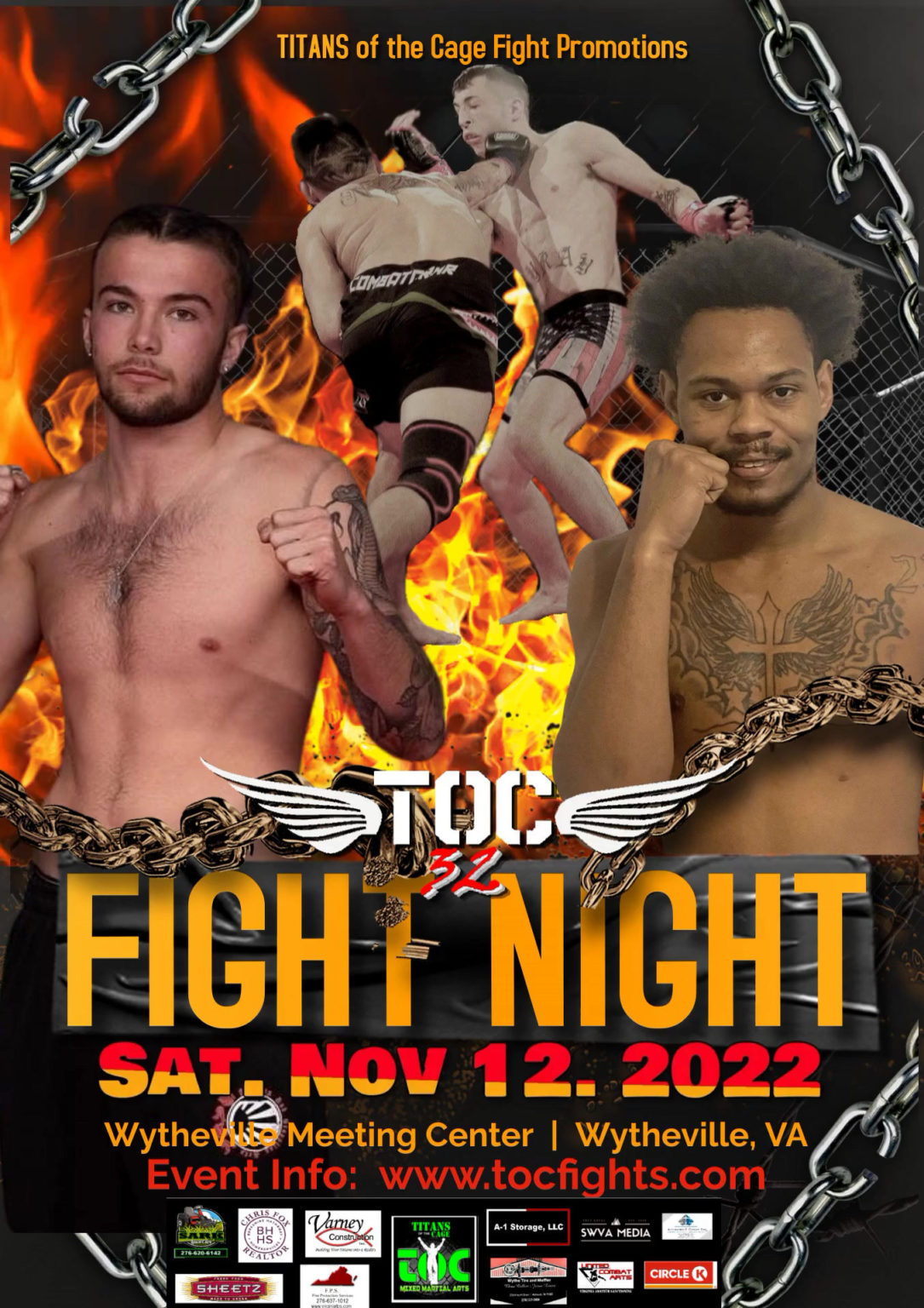 Ryan has been a fixture in the MMA scene since 2009, having covered a multitude of International, National, regional and local events.  He also hosted his own podcast and maintained a website devoted to fights and fighters in his home state of Virginia.  Additionally, Ryan has been a matchmaker for a number of International, regional and local MMA promotions as well as a play-by-play and color commentator for several promotions.