UFC strawweight champion Joanna Jedrzejczyk will defend her title against number one contender Jessica Andrade in the co-main event of UFC 211. 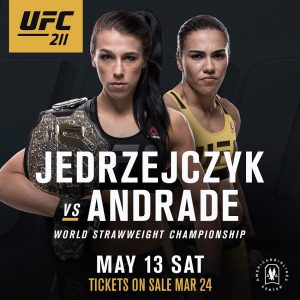 The event is set for  Saturday, May 13, at American Airlines Center in Dallas, Texas.

In the  night’s main event, Stipe Miocic defends his UFC heavyweight title against the last man to defeat him, former world champion Junior Dos Santos, in a highly anticipated rematch.

Unbeaten in 13 pro fights, Poland’s Jedrzejczyk took the title from the inaugural champion Carla Esparza and hasn’t looked back since.

Andrade is coming off a win over the most recent Invicta FC strawweight champ Angela Hill.