UFC lightweight Jim Miller, and current welterweight with plans to move down to lightweight, Mickey Gall, will be in the Poconos as part of an event hosted by MyMMANews.com. 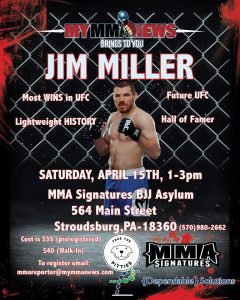 Miller, the winningest fighter in UFC lightweight history, will hold a seminar at MMA Signatures MMA & BJJ Asylum on Main Street in Stroudsburg from 1-3 p.m.

The Sparta, New Jersey native hold a professional mixed martial arts record of 28-9 and 1 no contest. He competed inside the UFC octagon a total of 26 times, winning 17 of those bouts, setting himself up to earn the most wins in the organization’s 155-pound division.

Miller said the seminar will consist of some wrestling for mixed martial arts, along with top and side control drills.

Registration for the two-hour event is $40 at the door, but you can save $5 by signing up in advance.

You can pre-register by clicking the button below.

Later in the evening Miller will take the bridge over to East Stroudsburg where he will be joined by Gall at the town’s ever-popular eatery, Trackside Station Grill and Bar.

There Gall and Miller will meet and greet fans as well as sign autographs and take pictures.  The first 100 people will receive free 8×10″ photos signed by each fighter.  The event will be held from 8-10 p.m., at Trackside.

UFC on FOX 24 will be broadcast throughout the restaurant providing fans an opportunity to catch all the action with the stars.  In the evening’s main event, UFC flyweight champion Demetrious ‘Mighty Mouse’ Johnson will defend his title against Wilson Reis.

Gall, 4-0 as a professional, also a New Jersey native, rose on the UFC scene last year after being signed to the organization while UFC President Dana White was filming a reality series called ‘Dana White:  Lookin’ For a Fight.’

White and friends scour the land for top up and coming athletes to compete under the UFC banner.

Since signing with the UFC, Gall has remained undefeated with three wins in 2016, most notably over former World Wrestling Entertainment (WWE) star “CM Punk.”

Both events are also being sponsored by the credit card processing company, Dependable Solutions, and the New Jersey based organization Free the Pitties, which helps find homes for pit bulls. 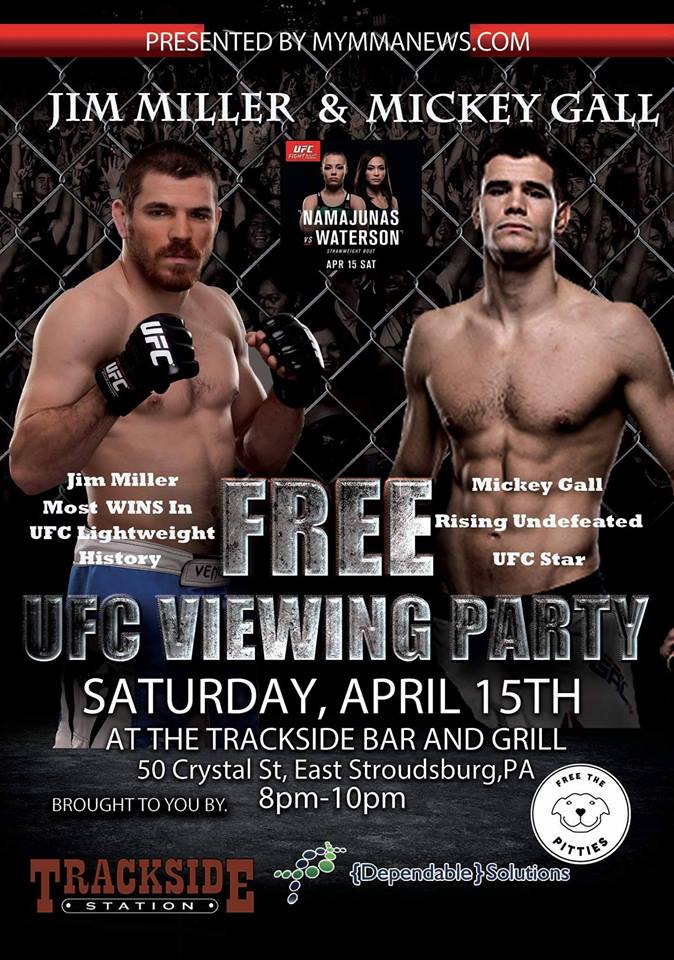