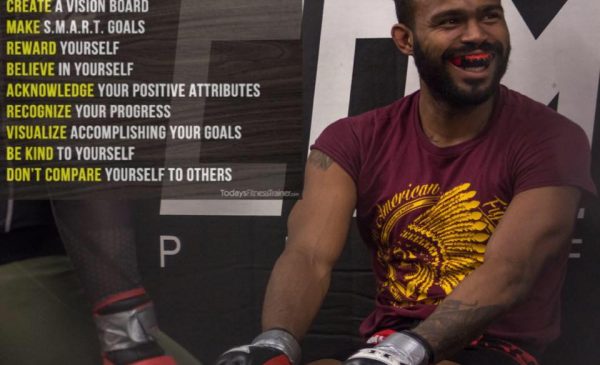 Jordan Griffin takes time to out of his busy schedule to catch up with MYMMANews to discuss his latest win over the tough Darrick Minner as well as his UFC aspirations.

Who do you want to fight next?

“It’s a toss-up between Fernando Padilla or Robert Watley. Even though Padilla is coming off a loss I think it’d be an exciting match up. This is my LFA debut but I think Watley would be an interesting match. Some people feel I need to work more on my wrestling, but to be honest I just think I’m a different type of fighter at 155. The cut isn’t as extreme or hard on my body as dropping down to 145 is. I think the cut to 155 would be an easy cut. I’d feel strong. I think I’d really be able to showcase my wrestling skills as well as my striking.

“In the long run I want to fight whatever gets me close to the 145-pound belt. I know they’re going to unify that belt sometime in May. So, whoever the boss man says I got to fight to get a title shot at 145 or 155 I’d be willing to take it.”

Do you think your weight cut affected this last match up in terms of strength? You were pinned down quite a bit by Minner.

“I was literally just talking to Paul Felder and Mike “Biggie” Rhodes about this. I cut salt out too early as well cut water out too early. For this next match I’m going to go back to really hydrating. That has been my strategy in the past, but this time I cut it out too early. So, I’m going to figure that out. It’s always a fine-tuning process.

“I only fought one-time last year. This is my first time fighting this year. When I was fighting four or five time a year I was just more in tune with my body. I knew when to cut, how to cut. I think it’s just a matter of getting back into that mode. I’m happy that I’ll be fighting fairly soon, most likely within the next three months I’ll be back in the ring.”

Did you see the submission or rely on your coaches to help you out of a tough spot?

“I relied on my coaches. I didn’t see the submission. I’ve been in that position plenty of times so I had my legs straight. Which is why he was trying to reach for my legs, but he couldn’t get them. When he reached through the leg I saw the arm, but to be honest I was going to try to go for something else. We were in a 50/50 position. Anything could have went down. I’m happy I had Professor Wanderlay to help me through it. He told me arm and I was able to go for it. When I look back I also had his leg hooked which was very cool.”

As your record continues to improve where do you see yourself going?

“I see myself going to the UFC. I think I’m ready. The difference between me and a lot of these other guys is the quality and caliber of who we are fighting. A lot of these guys are out here fighting straight turds. Racking up wins over unimpressive opponents. I think by the time they get to the UFC they get trashed. It’s because their record was only good on paper and they’re not ready for that level of competition. That level is too high for them. I think for me the difference is I’ve been sparring MMA champions since I was 18.