This past Saturday, April 11, one of America’s best Muay Thai fighters, Justin “The Purple People Eater” Greskiewicz,won the prestigious WBC National Welterweight Championship title in a five round battle that was decided by one point, over Eddie Martinez of Sitan Gym Connecticut.  Greskiewicz is also the owner of Stay Fly Muay Thai in Philadelphia, Pennsylvania. 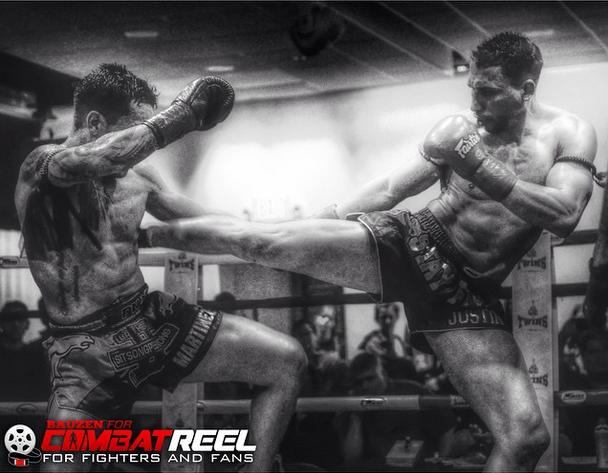 He has fought some of the top fighters in the world, including Malaipet Sasiprapa, Kevin Ross, Salah Kalifah, Matt Embree, Shane Campbell, and Liam Harrison. “The Purple People Eater” is one of the few east coast fighters who has earned a WBC title belt, an international title agains the WBC UK champion, Bernie Mendietta of England.  He has also competed in some of the nation’s largest promotions, including Lion Fight and K-1.

This was the third time the two men (Greskiewicz and Martinez) fought each other and according to a blog written by Greskiewicz:

“That made me feel amazing, and the green and gold belt strapped around my waist after my hand was raised was the biggest ribbon that’s been bestowed on me to date. That, however, was only the icing of the cake. In truth, the thing I gained was earned by both Eddie and myself over every hard fought second of that fifteen minutes. It was the amazing opportunity we were given to push ourselves to our limits by another of our level being placed in front of us and competing for the same thing. I’m very thankful to have spent 3 hard fights in the ring with Eddie. 45 hard fought minutes that forced us to dig deep and be our best. He has won fights. I’ve won fights. Some easy, some hard. He and I are both better fighters after having fought on Saturday. I respect Eddie very much as a fighter. He deserved that fight as much as I did, and I’m so glad that we both got to shine for that time. True, I left with the belt that night, but the real trophy was taken home by both of us.”