HEAVYWEIGHTS BOBBY LASHLEY AND JAMES THOMPSON TO SETTLE THEIR SCORE AT ‘BELLATOR 145: VENGEANCE’ NOVEMBER 6 ON SPIKE 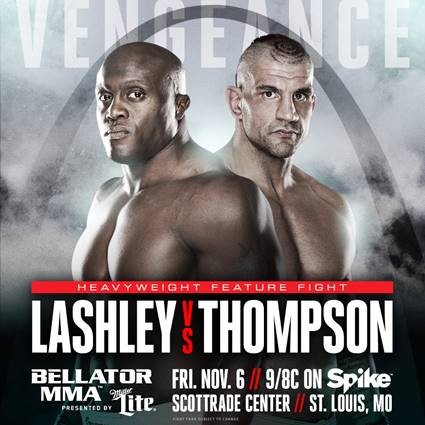 SANTA MONICA, Calif. (September 25, 2015) – This past June, fans in St. Louis were deprived of a highly anticipated heavyweight rematch between Bobby “The Dominator” Lashley (13-2) and James “The Colossus” Thompson (20-14, 1 NC), when Thompson was forced to withdraw from the bout due to injury.  On Friday, November 6, the two heavyweights will finally square off at “Bellator 145: Vengeance,” at the Scottrade Center in the Gateway City.

The contest completes the main card of “Bellator 145: ‘Vengeance,” which airs live on Spike at 9 p.m. ET/8 p.m. CT, while preliminary bouts will stream on Spike.com at 7 p.m. ET.

Tickets for “Bellator 145: ‘Vengeance,” which start at just $30, are on sale now on Ticketmaster.com and at the Ford Box Office at Scottrade Center. Doors for the event open at 5:00 p.m. CT local time, and the first contest takes place shortly after.

Lashley looks to avenge a 2012 split decision loss to Thompson.  The unfinished business between the two giant heavyweights was originally scheduled to be settled at “Bellator 134: The British Invasion” and again at “Bellator 138: Unfinished Business,” but an injuries sustained by both men caused the fights to be rescheduled.

Thompson, a 6-foot-5 striking specialist, hails from England and has been fighting professionally since 2003. A former rugby player and bodybuilder, “The Colossus” found his true calling in MMA and has been competing around the globe ever since. Fighting some of the best heavyweights in the sport, including Kimbo Slice, Alexander Emelianenko, Don Frye, Alistair Overeem, Mariusz Pudzianowki, Bob Sapp, Dan Severn and Hidehiko Yoshida, among others, Thompson has racked up 11 wins by knockout and another seven by submission.

A 6-foot-3, former WWE superstar, Lashley started training in the grappling arts at age 12 and would go on to win several titles, including: three National Championships at Missouri Valley College, an NAIA National Championship, a CISM World Championship Silver Medal and two Armed Forces Wrestling Championships during his tenure in the U.S. Army. In addition to a professional wrestling career with stints in WWE, ECW and TNA, Lashley began his MMA career in 2008, and has built an impressive resume that includes Bellator MMA submission wins over Karl Etherington, Josh Burns and most recently, a technical knockout of Dan Charles.