Mariah Castro has started off her mixed martial arts career with three consecutive victories and I have been lucky enough to be cageside commentating for all of them.  She is a resilient, tough fighter who gives much of the credit to her team at Carnicella MMA.  She leaves the fight game plan up to her coaches and looks to execute that strategy once the bell rings.  Mariah realizes that she is very young and new to the sport and admits she has some things that she calls sloppy habits and that is where her team has helped her to improve on a daily basis.

On Saturday night February 8th, Castro has the opportunity to put all of that learning to good use once again as she steps into the cage at Art of War Cage Fighting 17, challenging current straw-weight champion “Bang Bang” Sandy Chheng (4-1) for her title.  Please check out our interview with the challenger on the link above.  Mariah told MyMMANews…

“Fighting for the title is great, but this fight is about showing me evolving as a fighter, as a mixed martial artist. It’s been a short time and I have stayed active so it’s important to show that I have improved in between fights.  I’m feeling loose and confident and I know as soon as I weigh in I will feel a hundred times better. I have seen Sandy’s fights and I am prepared for however this fight goes.  I am comfortable in the clinch or grappling.  I take pride in being well-rounded so however this fight goes, I’m ready.”

Art of War Cage Fighting will be hosting back to back events on the 7th and 8th of February.  This is the second consecutive year that the Pennsylvania based promotion has done this as the holidays are in the rear view mirror and a slew of talented fighters are ready to rumble.  The 2300 Arena has been sold out to capacity for each previous event and AOW 16 and 17 are on a path to do the same.  MyMMANews will be on site as I call the action from cage-side with Justin Haskell and talk to the winners.  Adam Crist and Eric Kowal will be splitting duties with brilliant live coverage and results and William McKee will be killing it from behind the lens.  Stay right here for all of your combat sports needs. 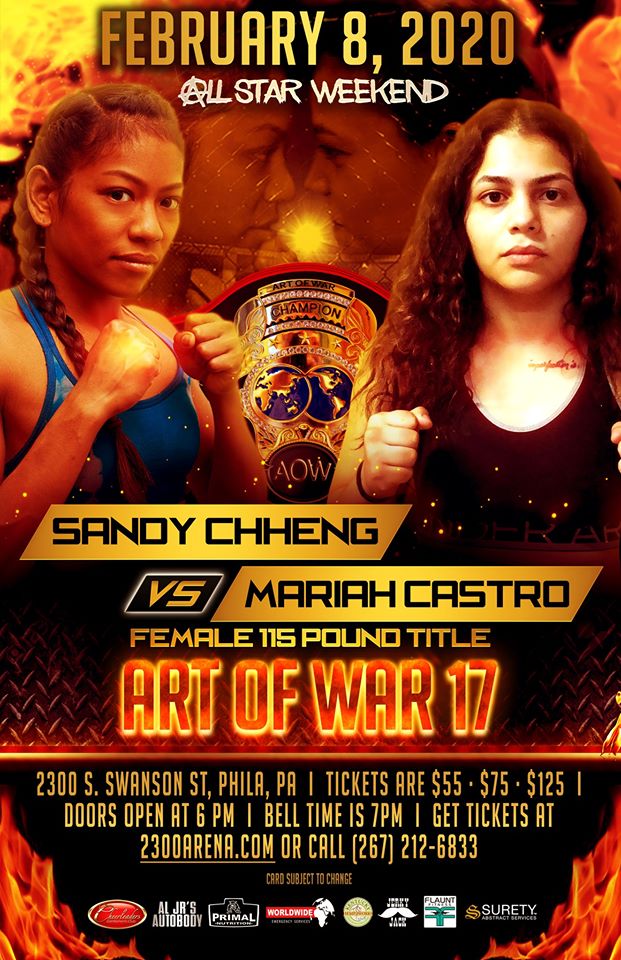