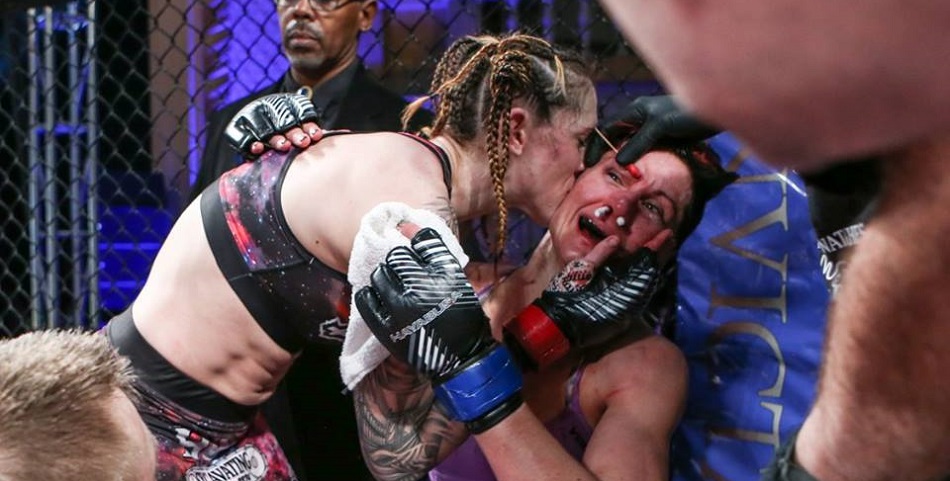 Megan Anderson:  The Most Marketable Woman In Mixed Martial Arts

This past Saturday night I was sitting 10-feet from the cage when rising Invicta Fighting Championship’s star Megan Anderson (8-2) head-kicked Charmaine Tweet to begin the process that would award her a TKO victory, placing the organization’s interim featherweight title around her waist.

Now, I had never met Anderson before the Invicta FC 21 event, but I had a sense that she was a star in the making.  January 14, my assessment was solidified.  I am not saying she is the best female fighter on the planet because Megan is still young, and up and coming.  But, if the UFC does what I think they might do, she could be the most marketable female fighter in MMA.

Before the fight started, I tweeted:

Then, minutes later Invicta FC President Shannon Knapp is wrapping the belt around the waist of Anderson, who then did exactly what the UFC wants their fighters to do.

“Dana White, you tell Holly or Germaine to keep my belt warm, because I’m f*cking coming for it.”

UFC 208 marks the launch of the women’s 145-pound division and they are using two women who have been fighting at 135-pounds in the UFC to headline.  Granted both have fought at 145 previously outside the organization, it still feels a bit odd to many.

Here is Anderson on a four-fight win streak at 145-pounds, wanting to get an opportunity on the higher stage.

The nigh of the fight, February 11, also happens to be Anderson’s birthday.  What better way than for the UFC to fly her to Brooklyn, sit her cageside and be able to walk into the cage to stare the winner of the Holm vs. de Randamie fight in the eye, and hype up the next fight?

There are no other women currently signed to the UFC 145-pound division.  It’s Holly and Germaine.  That is it.

Cyborg is currently on the shelf with a USADA violation.

Who do you bring in?

Megan Anderson is the only logical answer.  It’s interesting, it’s new, and the right thing to do.

Sure Amanda Nunes wants to claim a second belt, but come on.  She’s only defended once and there are women waiting on the sidelines.   The winner of Julianna Pena and Valentina Shevchenko is the obvious choice for the 135-pound title.  Then you have names like Raquel Pennington (once she is healed up from surgery).

Anderson made the commitment to move from Australia to Kansas City which is where the majority of the Invicta FC fight cards are held.  She is essentially an outsider who has become the hometime favorite.  That’s it in a nutshell. 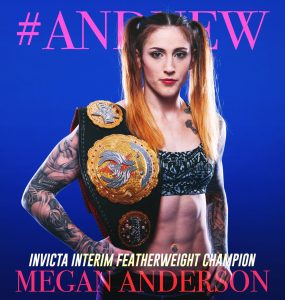 Invicta FC fans are dedicated.  They follow the ladies they love but there are several who get bigger pops than others, just as in any sports.  Tonya Evinger, Andrea Lee, and Roxeanne Modaferri are arguably the organization’s biggest draws outside of Anderson.  (Cyborg not included because she been fighting in the UFC).

Anderson is exactly what the UFC needs and wants for their new division.

Who doesn’t like a tall, attractive, tattooed badass woman?

She has the looks, she uses the microphone, and she is the champion in the largest women’s MMA feeder organization to the UFC that there is.

Paige VanZant is likely the most popular 115-pound female fighter in the UFC, but she’s coming off a loss. She’s not headlining a card in her next fight.  The division’s champion Joanna Jedrzejczyk is the boss. She’s the champ, but all the women in the division’s top three, Claudia Gadelha, Karolina Kowalkiewicz, and Carla Esparza have all been defeated once and in some instance twice already by Joanna.

So let’s move to women’s bantamweight.  We already discussed Amanda Nunes needing to defend her title a bit more before a division change.  Nunes is without a doubt the baddest woman in mixed martial arts right now.  Cyborg is suspended so the bantamweight champ takes the cake.

But as far as current marketability… it has to be Megan right?  She’s doing exactly what the UFC wants and needs… and her timing is impeccable.

By Andy Stevenson 51 mins ago

By Mike Pendleton 24 hours ago