Michael DeLouisa (6-1 amateur) of Driven Gym in Woodbridge, New Jersey, will make his professional mixed martial arts debut on September 13. The man standing opposite DeLouisa once locked inside the cage will be no stranger to the 25-year old competitor coached by James Meals.   He will be taking on the 22-year old Timmy “Vicious” Tyler (1-3 pro) in a rematch from their Maverick MMA 1 fight in April 2017.

It took just 71-seconds for DeLouisa to submit Tyler in that 165-pound catchweight contest.  This time the fight will be contested at lightweight (155-pounds).

“Its official, I have signed my first pro contract!” DeLouisa wrote on Facebook. “I am excited to announce that on September 13th 2019 I will be stepping in the Ring Of Combat cage at the Tropicana in AC to fight @timmy__tyler in my first pro fight. I cannot wait to make that first walk as a professional athlete. Thank you to my coaches @coachmeals @hitemwitdapawz and @coach165 along with all of my sponsors!! September cant come soon enough.” 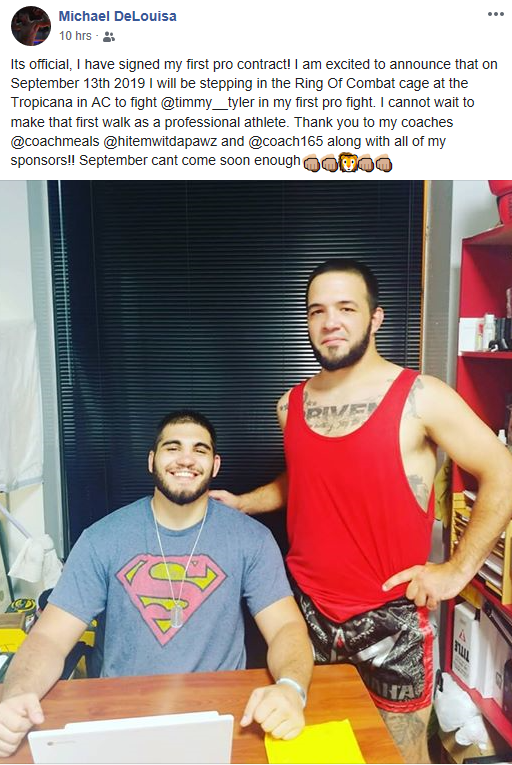 The loss to DeLouisa was the last amateur fight that Tyler competed in.  He then jumped to the professional level where he dropped three straights bout before picking up his first pro win at PA Cage Fight 34 in December 2018. There Tyler made quick work of Mike Taylor, knocking him out in just 36-seconds.

Despite holding the win over Tyler, DeLouisa tells MyMMANews.com that he is not looking past his opponent.

“I never take anyone lightly….especially someone I’ve beaten before,” DeLouisa said.

MyMMANews.com confirmed with Greg Sirb, Executive Director, Pennsylvania State Athletic Commission that a suspension that Tyler was previously serving has expired.  According to Sirb, Tyler is cleared to fight.

DeLouisa makes the leap to the pros, coming off a loss to Mike Ahearn at Dead Serious 34 in May.  He rattled off six amateur wins prior to the blemish.

Ring of Combat 69 takes place at the Tropicana Hotel and Casino in Atlantic City, New Jersey and will be broadcast live on UFC Fight Pass.  No other fights have been formally announced at this time.