This story is just plain nuts!!!!

Alright… enough of the jokes, especially ones below the belt.

Donovan Salvato, 29, spent approximately 12 hours in the Metro Nashville Jail this week after he allegedly bit his roommate’s testicles during an argument.

Salvato allegedly assaulted his roommate, Abel Sosa during an argument on November 11 and was held in jail under domestic violence charges.

According to a police report, Sosa stated there had been an ongoing verbal argument with the defendant over him staying at the address and not being on the lease agreement.

The report states that Salvato then allegedly punched Sosa in the face and torso, before biting and tearing flesh from his testicles.

Injuries recorded include a two to two-and-a-half inch laceration to his scrotum, several bruises, a busted lip, and swelling of his
head.

Sosa has since got to Facebook where he posted several times about the incident. 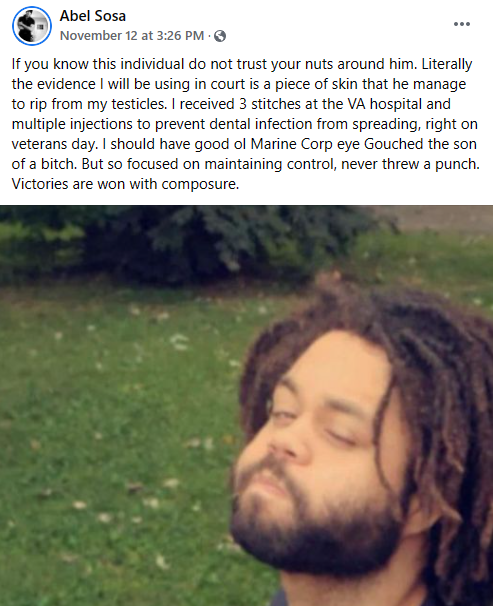 Donovan Salvato holds an amateur mixed martial arts record of 3-1 with all four of his bouts taking place under Jonathan Ivey’s Cage Fighting Championships in Tennessee.  His last fight, his lone loss, took place in March 2020 where he lost a decision.