The term “Jack of all trades” is exactly how a person would described A.J. Hiller.

He has already been inducted into the Legends of MMA Hall of Fame and now besides owning the world’s largest mixed martial arts memorabilia and authentic autograph collection, MMA Signatures, and being the founder of the MMA Classic Fan Expo, Hiller has now taken on two more titles, both of which are completely unrelated. 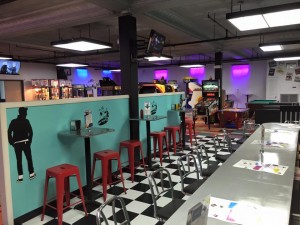 Hiller, along with co-owner, Craig Deboer, are opening up a 1950’s themed cafe in Stroudsburg, Pennsylvania.  If that were not a huge undertaking in and of itself, he is also bringing in UFC strawweight contender, Claudia Gadehla as head coach for a gym he plans to open next month.  That gym….. directly underneath the cafe.

Along with special guest appearances by celebrities such as Elvis Presley and Marilyn Monroe, the cafe also has arcade games for patrons to play.

The ’50s themed cafe which the duo aptly named AC’s Diner, and arcade are open for breakfast, lunch, and dinner and even late night on weekends.

Hours of operation are: Sunday-Thursday 6 am-11 pm and Friday and Saturday 6 am-3 am

Hiller and his company MMA Signatures, based in nearby East Stroudsburg, Pa., not only sell thousands of items per year but they also help fighters with sponsorships and training opportunities that help put money back into their pocket.

Hiller states that in 2014 alone MMA Signatures sponsored more than 40 UFC fighters and another 50 in smaller promotions, an example of how his family run business gives back to the sport that provides for him.