If Ian Heinisch learned anything in 2020, it’s that plans change.

“The Hurricane” fought just once last year after having two potential bouts scrapped. He was even forced to postpone a permanent move from Colorado to Thailand.

None of this is ideal, but Heinisch is familiar with not being married to a plan. It’s the story of his life if you ask him.

As of right now, things are looking up for Heinisch. He found a new home as he is currently training in Colorado with Jake Ramos at Genesis Training Academy and Peter Straub at Team Elevation. With his new team, Heinisch is preparing to fight a fellow ranked-middleweight in Kelvin Gastelum at UFC 258 in Yas Island, Abu Dhabi on Feb. 13.

“Just live day by day because that is the only thing we have at the moment,” Heinisch said.

Plans of the past for Ian Heinisch

Plans falling through is protocol at this point for Heinisch.

The 32-year-old spent 3 ½ years inside prisons in the Canary Islands and Northern Spain after being arrested on a cocaine smuggling charge. After his release, Heinisch came back to the United States, only to be arrested again for previously fleeing the country following another drug-related arrest in 2009.

He found a way to overcome it all.

“You make all these plans,” Heinisch said. “Just shows you can be rock bottom in a foreign prison like I was about six years ago to climb to the top of something that if you believe in it, you follow God’s will and his power, you can do anything you want in your life.”

Ian Heinisch is settling in

Heinisch moved to Thailand in early 2020 to train with Tiger Muay Thai. Once COVID-19 started to spread around the world, Heinisch came back to the United States.

Instead of training in Thailand, Heinisch found himself training with a tight knit group in local parks throughout Colorado.

Heinisch is still training with those same partners, but on a larger scale. He even trained for some time at Xtreme Couture in Las Vegas, Nevada.

During his current fight camp, Heinisch continues to work with Ramos and Straub as well as many other fighters, including UFC lightweight Drew Dober.

“I am happy with where I’m at,” Heinisch said. “We’re getting some great training and making some really good connections with some great coaches.” 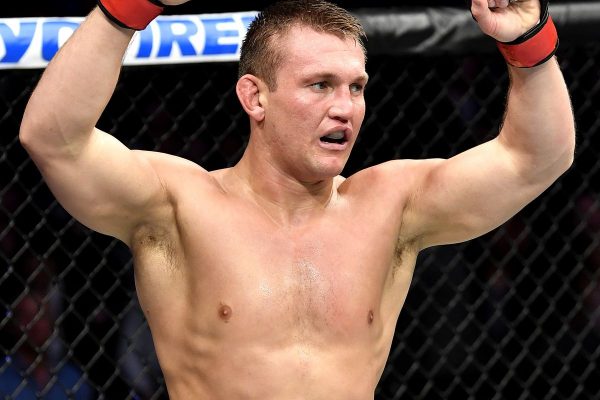 Heinish’s only fight last year included a 74-second knockout victory against Gerald Meerschaert at UFC 250 in June. Even the win came with some drama as one of Heinisch’s cornermen had a false-positive coronavirus test.

He tried to follow the victory up with a win against Brendan Allen, but the fight fell through twice.

Heinisch was force to withdraw from the first meeting in June due to a back injury. The two were rescheduled to face UFC on ESPN+ 40 in July, but Heinisch tested positive for COVID-19, forcing the bout to be scrapped again just hours before the event.

He is not drawing Allen this time, but is getting someone who is ranked even higher. Gastelum, the season 17 winner of “The Ultimate Fighter,” ranked No. 8 among the UFC middleweights.

Heinisch is slightly behind at 15. Gastelum is currently on a three-fight skid, but has fought some of the top talent inside the octagon.

Gastelum is not Allen, but it is a step up according to the rankings. Heinisch currently sits at No. 15.

“It all works out how it’s supposed to,” Heinisch said. “Now I get a huge opportunity, get myself back int hat top 10, get myself back on track of going after that title and really get to show the world what I’m about against a very notable and skilled fighter.”

Plans fell through, but Heinisch is happy with his fight camp ahead of one of his biggest UFC tests to date.

The past is the past and he is looking ahead. As lesson are learned, Heinisch is not staring too far forward though, just at what’s in front right now.

To see the full interview, click on the video above.