Atlas Fights, one of the South’s prominent regional MMA promotions, is bringing MMA back to Mississippi outdoors August 01, 2020. There is a third card announced for September 05, 2020, and will feature one of Louisiana’s original heavyweight fighters in Nunzio Camarata. Not only does Camarata compete in the cage, but he is also helping train the next generation’s fighters at Grace United Team Jucao in Amite, Louisiana.

Coming Back From Retirement

The scene was Bayou Fighting Championship 37 May 18, 2019. The location was Ponchatoula, Louisiana. Camarata walked into the night as the featured co-main event and retirement on his mind. The bout did not go as expected and the extremely talented Brandon Hebert walked out the Bayou FC heavyweight champion in 38 seconds. For a while this was it for Camarata. A professional career that started in 2005 was now over. For those that need a UFC reference, this was the same month Tito Ortiz defeated Vitor Belfort at UFC 51.

“I’d thought to myself that the last fight in BFC [Bayou Fighting Championship] was going to be my last. I think that was a part of the problem,” Camarata told MyMMANews. “When you put it in your mind that ‘oh this is it. What happens, happens.’ Well, what happened, did happen, and it sucked. I refuse to go out like that. To be honest, I was in bed one night, and I was ready to leave it behind me. All of a sudden, I got a message from Glenn Mattina from Atlas Fights asking me if I wanted to fight for the promotion. It was a sure sign that ‘it ain’t over.’ I accepted the fight because I need to go out there and prove to myself I can still go. Plus I’ve always wanted to perform in Atlas. I’ve always loved that promotion.

Heating Up the Beach

On September 05, 2020, Camarata will fight near the top of the card against fellow heavyweight veteran Tel Faulkner. The event will take place right on the beach in Biloxi, Mississippi. The organization recently announced they will also have four jumbo screens set up for a premium viewing experience, no matter where you are located. Should this actually be the retirement bout for Camarata, it will all have come full circle for the jiu-jitsu brown belt. “15 years ago I made my pro debut at the IP. Here I am years later ready to go,” Camarata stated. The IP Casino and Resort Hotel has been a home of Atlas Fights for many years and is also located in Biloxi.

“I’m very excited to be part of the scene still,” said Nunzio Camarata. “Of course, it’s a different world we live in now the pandemic. But MMA and pro wrestling are the only two live athletic sports, whether it be competitive or performance art, that are putting on consistent shows. I’m happy to be part of it,” Camarata said. “After the fighting is over I’ll always be around coaching/competing in grappling contests. Gracie United Team Jucao is my family and it’s my calling to help contribute to help build the current and next generation of our athletes alongside all the other great coaches we have.” 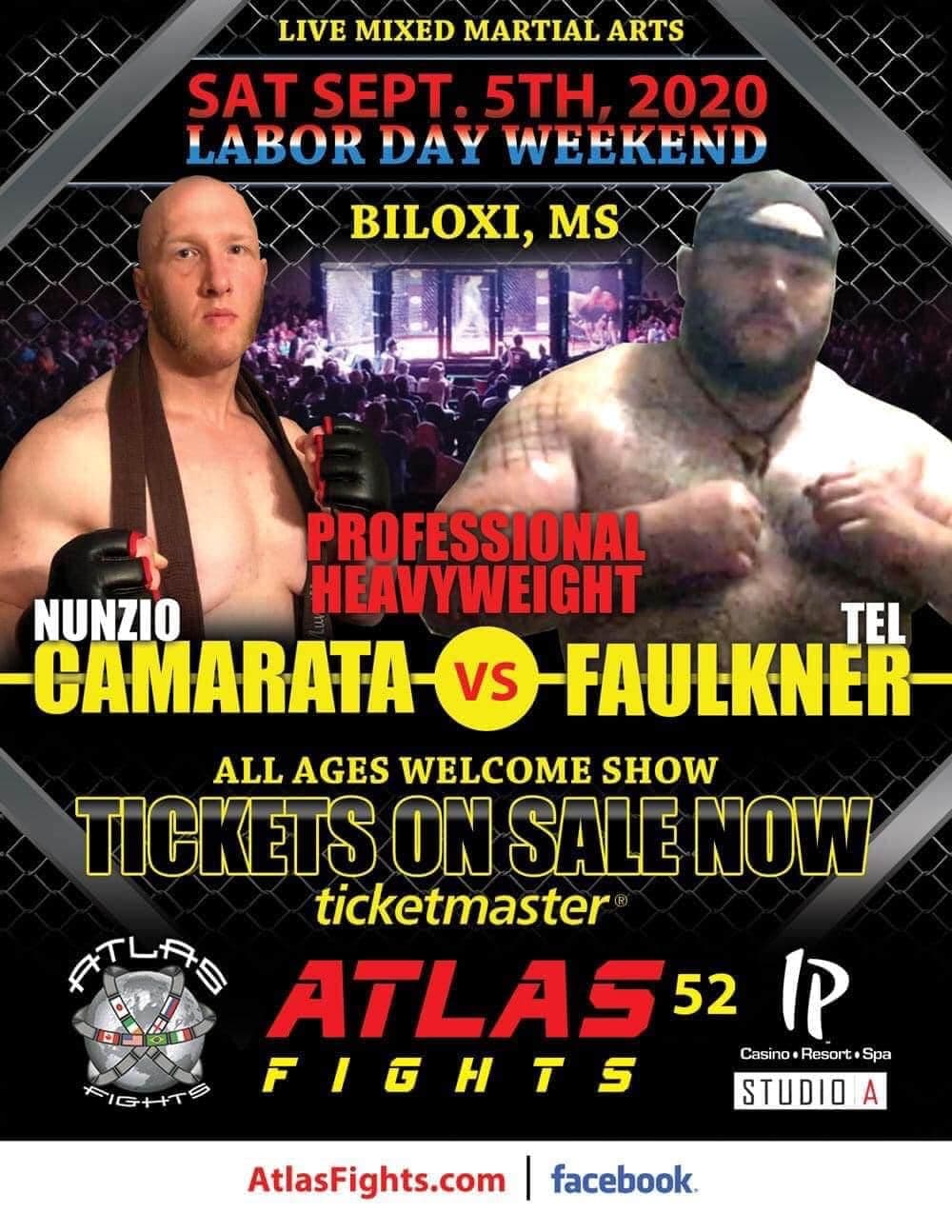