This past Sunday, high-level Muay Thai competitor Ognjen Topić shared his knowledge from inside the ring at the Easton Training Center in Denver, Colorado. As a three-time world champion, and active combatant in the elite stadiums of Thailand, Topić has boundless techniques to share from his expansive skill set.

In addition to making recent appearances in Thai stadiums such as Siam Omnoi and Lumpinee, the PK Saenchai trained tactician has also had impactful showings with premier Muay Thai organizations including ONE Championship, Lion Fight, and Yokkao.

Possibly one of the most impressive wins on Ognjen’s record came at Lion Fight 9 in 2013 versus Paowarit Sasiprapa. Topić (6-3 at the time) was able to drop the legendary Thai fighter with head kicks on two separate occasions. The second served as the strike that would devastate Paowarit’s equilibrium, and subsequently finish the fight. While the way the fight ended was imposing, the fact that this knockout was executed on such a high caliber fighter, with 150 wins on his record, added an extra layer to the spectacular moment.

In another high-profile match, Topić even took on the likes of the famous Saenchai at Yokkao 22 in Hong Kong. In this Muay Thai super fight, Saenchai was able to walk away with the decision victory. But, Ognjen kept things intriguing and competitive as the two showcased some fascinating methodologies over the course of three rounds.

Up Next from Ognjen Topić

The next opportunity for Muay Thai practitioners to absorb knowledge from Topić will be in March, at Kaensak Muay Thai. The former champion, Kaensak Sor Ploenjit, will welcome Topić to host a workshop at his esteemed facility in New Jersey. 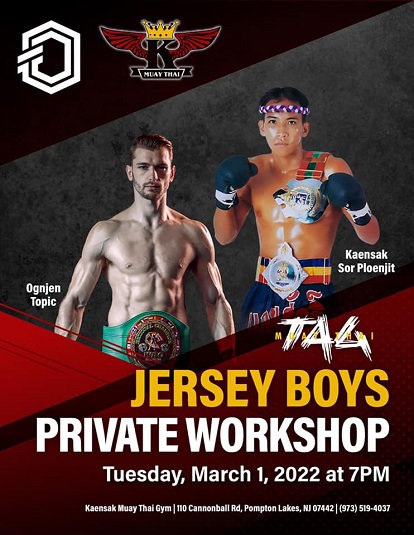 Ognjen also offers services as a personal trainer for 1-on-1 Muay Thai sessions. Additionally, there are multiple ‘TopicFight’ training videos available for purchase on TopicFight.com. Whether you are a seasoned technician looking for tips, or just interested in getting your feet wet in the Muay Thai striking realm, look no further than TopicFight training.

Keep an eye on the Kickboxing / Muay Thai section of MyMMANews.com to stay up to date on the “Art of Eight Limbs”.

How Can TB-500 Improve Arthritis?

Kickboxing is the best fit for the Olympic Games

Alex Nicholson: “Oscar is in trouble. I can’t wait to see him again!”

By Adam Crist 2 weeks ago

By Brady Briggs 3 weeks ago