We had four epic flyweight bouts last night at UFC 255. Aside from the Shevchenko sisters winning their fights, the two in the men’s divisions included Brandon Moreno versus Brandon Royval, and of course the main event, Deiveson Figueiredo versus Alex Perez.

Figueiredo was supposed to be facing former UFC Bantamweight Champion Cody Garbrandt at this event, but Garbrandt pulled out with a torn bicep and was replaced by Perez. 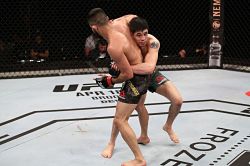 Really, it probably should’ve been Moreno challenging Figueiredo for the belt from the start.

He was the No. 1 contender going into his fight with Royval, and Perez was ranked at No. 4. Nonetheless, we saw two epic first-round finishes; Moreno TKO’d Royval at 4:59 of round one, and Figueiredo submitted (guillotine choke) Perez at 1:57 of round one.

Not to mention, UFC Bantamweight Champion Petr Yan just withdrew himself from his title defense against Aljamain Sterling at UFC 256 next month, and both of the winners last night have verbally agreed to fill that spot on the December 12 pay-per-view card. 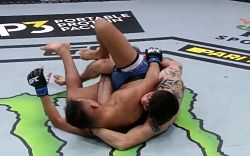 This would be an absolutely wicked match up, and it seems inevitable it’s what’s next for both men. This would be the quickest turnaround in UFC history for any champion, and it appears Figueiredo will take that record come next month.

Moreno has been a prodigy ever since we first saw him on The Ultimate Fighter 24, where though he lost his first fight of the competition to Alexandre Pantoja, we knew he was an elite talent we’d be seeing in the UFC for some time to come. 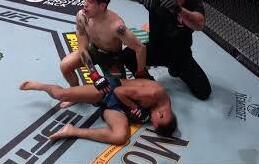 He was just 23-years-old at the time, he’s now almost 27, and he’s been improving as steadily as anyone in the sport.

His boxing is great, and his grappling is at quite a high level as well. He almost submitted Royval a few times, who’s a very dangerous BJJ black belt. The champion has also been improving at a very steady rate lately.

Figueiredo lost his fight to Jussier Formiga in March of 2019, still his only defeat to this day. He was out-wrestled throughout the fight. The point of this is, he learned from it.

He’s been taken down just twice since this, but what’s really to behold here is the fact that he submitted both opponents with guillotine chokes when they did get him down, on the first attempt.

Tim Elliott shot in on a double leg and was wrapped in a guillotine that finished the fight, and the same thing happened last night.

He’s not letting that happen again. It was quick too, both times. He also nearly secured an armbar on Joseph Benavidez in their first fight during a scramble, and did submit (rear naked choke) him in their rematch, after knocking him down three times in four minutes, and after knocking him out the first time.

That was really Figueiredo’s coming out party. He dominated and finished Benavidez twice. Their first fight was closer until the finish, but he looked great throughout the fight. Benavidez had only lost to three opponents prior, two of which are the best ever in their weight class.

The two split decisions, and knockout defeats came in title fights, and he’d only been finished once in his entire 13-year career. Figueiredo handled him so easily, finished him back-to-back, and he just did the same to former TPF Flyweight Champion Alex Perez. 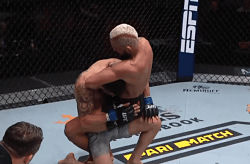 His striking was looking incredible and devastating early on, as it always does, and that torque he has when he’s got a choke locked in, it’s insane the squeeze this man possesses. Mix that with him being a BJJ black belt, he’s a very dangerous champion.

Moreno is no stranger to championships himself, as he won the WFF Flyweight Championship and defended it three times before joining The Ultimate Fighter cast. After going 3-0 in the UFC, he lost his next two and was cut.

He fought once for the LFA after being cut and won the LFA Flyweight Championship via TKO in round four, before being resigned immediately afterward. 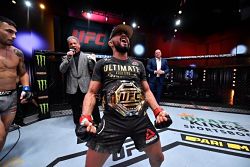 It’s evident, he never should’ve been cut, the UFC is where he’s belonged since 2016. Moreno is also a ranked BJJ practitioner, boasting a brown belt in the art. He’s also never been finished, officially.

He was submitted (rear naked choke) by Pantoja in round two of their TUF fight, but all five of his official losses are decisions.

Moreno actually rematched Pantoja in May of 2018, two years after their first, and though he still didn’t get the victory this time around, he wasn’t finished. That was still a little too soon for that rematch to happen. Now, or a couple years from now, he probably would have been ready.

The champion stands 5’5” with a 68” reach, while Moreno stands 5’7” with a 70” reach. These two are both so dangerous everywhere, hopefully the UFC jumps on this opportunity. Luckily, they both had quick, dominant displays last night that didn’t cause injury, to them.

Who wins this flyweight championship match up, should it happen December 12?