Presidents Day – Commanders in Chief who kicked a$$

Abraham Lincoln is best known for his tenure as president,  helping to abolish slavery, and then of course his assassination while serving as U.S. President, but he is also an inductee to the national wrestling hall of fame in Stillwater, OK. An accomplished frontier wrestler, he took all comers and only lost to one opponent.

In the rough and ready style of the frontier, “catch as catch can” wrestling was more hand-to-hand combat than sport. Lincoln, an awesome physical specimen at 6-feet-4, was widely known for his wrestling skills and had only one recorded defeat in a dozen years.

At age 19, he defended his stepbrother’s river barge from Natchez thugs by throwing the hijackers overboard.

Here’s a depiction of his handling of a local bully. 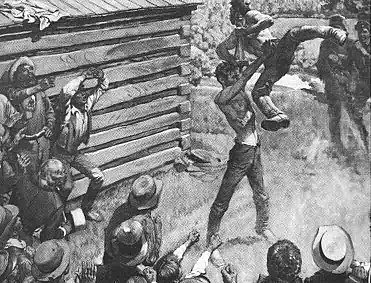 Abraham Lincoln moved to New Salem, Illinois, in 1831. The Clary’s Grove boys lived in a settlement near New Salem. They were a loud, reckless, frontier crowd who enjoyed fighting and drinking. They boasted they could wrestle better and hit harder than any other group throughout Illinois. At times they could also be generous and good-natured. Their leader was a man named Jack Armstrong. (The picture of Jack Armstrong is from the Lloyd Ostendorf collection.)Denton Offutt, in whose store Lincoln was a clerk, bragged that his employee was mentally and physically superior to any of the Clary’s Grove boys. He openly said Lincoln could whip any man in the community. Hearing of Offutt’s boasting, Jack Armstrong challenged Lincoln to a wrestling match. Lincoln accepted.

The entire town turned out for the fight. Offutt bet $10 Lincoln would win. Other residents wagered money, drinks, even trinkets and knives. Lincoln was 6′ 4″ and weighed 185 pounds, but Jack Armstrong was an experienced, formidable opponent. Although he was smaller than Lincoln, he was as strong as an ox. The stage was set. 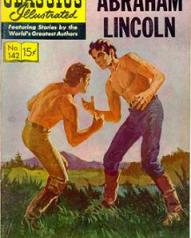 For a time, the two scufflers circled each other warily. They did some grappling and twisting, but neither man could throw the other to the ground.  Slowly, Armstrong began to get the worst of it. Finally, Lincoln grabbed the bully by the neck, held him at arm’s length, and shook him like a little boy. This aroused the Clary’s Grove boys, and it suddenly appeared Lincoln might be attacked by an entire crowd of people. He backed up against the wall of Offutt’s store and offered to take them on one at a time.

Jack Armstrong was impressed with Abraham Lincoln’s display of courage. He came forward, took Lincoln’s hand and shook it heartily. He looked at his friends and said, “Boys, Abe Lincoln is the best fellow that ever broke into this settlement. He shall be one of us.” From then on, Abraham Lincoln and Jack Armstrong were the best of friends! Lincoln had a calming influence on the whole gang of Clary’s Grove boys, and his charisma had the effect of repressing their violence. Jack and his wife, Hannah, even allowed Lincoln to stay in their home when he was periodically out of work. 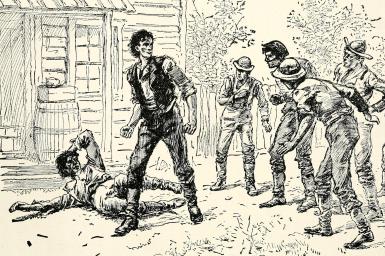 Many versions of Lincoln’s wrestling match exist, only one of which is presented on this page. For example, in Honor’s Voice: The Transformation of Abraham Lincoln by Douglas L. Wilson, a wrestling match eyewitness, Rowan Herndon, said that “after striving a long time without either man prevailing, Lincoln said: ‘Jack, let’s quit. I can’t throw you – you can’t throw me.’ Armstrong agreed and the matter was ended in fun.”

Harold von Schmidt painted the drawing of the wrestling match for Esquire in 1949.

It might be added that, although Lincoln’s wrestling ability was excellent, he wasn’t unbeatable. On April 22, 1832, Lincoln was thrown in two straight falls by Lorenzo Dow Thompson during a wrestling match in Beardstown, Illinois.

There were ten other besides Lincoln actually, who were accomplished grapplers. At 18, George Washington was the school champion at the Reverend James Maury’s Academy in Fredricksburg, Va. Washington was a master of the British style known as collar and elbow—named for wrestlers’ hand placements in the face-to-face starting position. This was a disciplined sport in which success depended on tactical expertise. Later in life, as the commander of the Continental armies, Washington then 47, used his superior wrestling skills to defeat seven consecutive challengers from the Massachusetts Volunteers.

Other commanders in chief who were successful wrestlers include Andrew Jackson, Zachary Taylor,, Ulysses S. Grant and Chester A. Arthur. At 225 pounds William Taft was twice crowned undergraduate champion at Yale after he mastered a wicked move called the Flying Marc with which he would savagely flip an opponent to the ground. And Theodore Roosevelt kept fit with regular wrestling workouts during his term as governor of New York. Also Dwight Eisenhower and John Tyler could be added to the list. 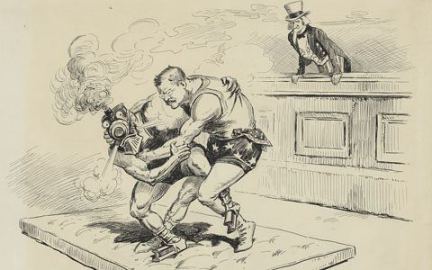