Initially founded as the original form of ‘classic pugilism’, bare-knuckle boxing was illegal and unlicensed until 2018. However, with the BKB World promotion enhancing and evolving this new professional sport under owner Jim Freeman’s rules and provision; the fighters that compete within his configuration are certainly a different breed from the prohibited underground scene contenders: hay-baled boxing ring amassed by fight-thirsty punters, goading for blood and knock-outs, as two unconditioned brawlers whose abilities are hindered by flab and spare-tyres from bulging stomachs, slug it out until one of them avalanches to the ground from exhaustion.

In addition, ‘old’ bare-knuckle usually operated with unskilled ” heavy-punchers”, whipping-off their t-shirts and laying into each other with intentions to settle a dispute or earn some money through a bare-fisted straightener.

In contrast, the official sport is now a far cry from the illegitimate era of unadept, reckless fighters; Jim’s lads are certainly pro athletes: sharp, fast and strong – a testament to the high standards of professional athleticism he demands. Lean and toned fighters sporting ripped middles, powerful arms, broad shoulders, with backs presenting like hillocks of muscle. Combining their MMA or Boxing cultivation, hardened grit and attacking ferocity that’s set to a hair trigger; the fighters viciously collide at a Grand Prix surge, in an amalgamation of warmongering and pugilistic-scrapping, right until the bloody-end. It has to be said; the displays on BKB World’s platform, are that of a thrilling and high-adrenaline nature.

Over the past 12 months, the UK based organisation have exhibited a seething plethora of truly rampant battles. One particular highlight is from BKB 11 when Tyler Goodjohn fought Tony Lafferty in a five-round Lightweight bout. The two men were physically apt, revved-up and chomping at the bit for a broiling war.

As the bell clanged for round one, both men propelled towards each other like a pair of coiled springs; violently terse, inflicting flurries of solid shots like they were going out of style. An electrifying and brutal whoosh of un-gloved-pugilistic menace blazed before a fired-up crowd as vast knuckles detonated onto jaws, noses and cheekbones, inducing slick-eyed-shiners, while rivulets of blood streamed from nasty cuts.

The raging toe-to-toe clash was eventually waived-off by the referee before the final bell, with Goodjohn executing a chopping right that timbered Lafferty to the canvass; the tough, talented Scotsman somehow managed to make the count, however, the fight was stopped moments after.

The sell-out crowd gave a tumultuous roar of accolades to Tyler Goodjohn, after earning a TKO victory against a formidable opponent. The spoils were London man’s, but not without a gruelling night’s work: his face a bloody mask, busted nose, bruised brow and a black eye. Nevertheless, another win was attained and carved into his unblemished record.

So, where does BKB World take its place amongst other combat sports? Well, unlike its pugnacious gloved- geminate: “Boxing”; the bared noble-art could not lay claim to any dreary or prosy contests. Amidst the compressed amphitheatre, fierce gladiators scrap it out in what quickly becomes a savage berth, embellished with blood, sweat, spit and…..knockouts.
However, whilst maintaining a high respect and regard for boxers and MMA athletes, bare-knuckle is arguably the purest and most brutal of combat sports: Universally understood, transparent and lucid in its objective – no need for in-depth interpretation of “how it works”, for its comprehension is elementary; yet, its technical and physical functions are both barbarous and adept.

(Don’t get me wrong), I’m an enormous fan of MMA and Boxing, but when the MMA immersed into the world of combat sports, it was met with mixed views and opinions – without much consideration for its appeal, attraction, enticement or potential success. However, time has enabled the mixed martial arts scene to evolve and flourish. Nowadays, it would be incredibly hard for us to imagine the world of professional combat sports without MMA. By that rationale, bare-knuckle boxing as a sport should be given the same positive deliberation and attention it now warrants, for this new sport conducts its affairs with a high calibre of competitors; professionally regulated, professionally managed, and expanding at an immense rate.

I recently met with Jim Freeman; the owner of BKB World. Jim kindly took the time to chat with me, sharing his thoughts on the growing popularity of bare-knuckle, his experience and views on Boxing & MMA. His aspirations, ambitions, the sell-out events and how he incorporates safety the safety aspects within such a brutal sport.

“I’ve always loved boxing and been involved with it until someone said about taking a look at bare-knuckle. As you can imagine, it was a small space with fighters just swinging and going crazy, but myself and Joe Brown (Co-Owner) thought there was a potential to make it a sport.”

On his decision to veer towards something different in the world of combat sports, Jim explained:

“With combat sports, everyone likes a good tear-up. But obviously Boxing and MMA were already established and we wanted something new. This is the original form of combat; it’s been established since the year 1719 and we’ve just modernised it with professional athletes, 50/50 match-ups, rules, smaller ring size, fewer and shorter, more action-packed rounds with extra rest time in between.”

“With how we’ve evolved it, we believe BKB is safer. We do same day weigh-ins, so there’s no water cuts, no hydration issues with the fighters; which adds to the safety aspect of it.
With bare fisted impacted, your body’s gonna give up before your brain is. The gloved side of it, we’ve all seen the terrible scenes when boxers collapse after a fight because the brain has been rattling around for thirty-six-minutes. We’ve been able to look at all the safety elements in order to build the sport.”

Where BKB World his heading:

“We’ve built something that is now a credible sport, but it’s not about egos and rushing in. We want to build the sport, build our fan-base and following and build in the UK, get some Arena shows under our belt then take BKB World internationally.

We’re selling-out professional shows at venues like the 02 in London; we’ve got ex-world champions like Glen Mccory, Robin Reid, Frank Bruno and top broadcasters like Tom Ross and Robin Black and fantastic fights, with our shows also being aired on a Sky PPV platform. With that said, we always endeavour to grow and improve.”

“Anyone who’s interested in MMA or Boxing, take a look or visit our Youtube channel and you’ll see we’ve got a good calibre of skilful ex-boxers and MMA fighters. Come to an event or pay £10 for PPV, invite your friends around, have a few a pizzas, have a few beers and watch our show. After that, I’ll guarantee you’ll be a fan.”

BKB 16 Prizefighter semi-finals will see middleweight warriors Connor Tierney, Richard Franco, Dean ‘Smudger’ Smith and James Connelly war it out for a place in the final. 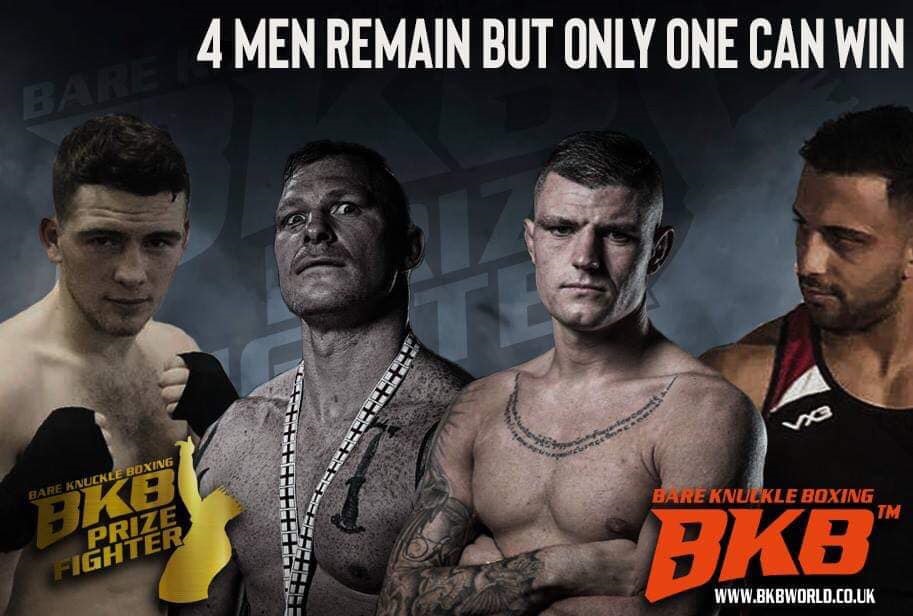