Indie Movie ‘Range 15’ Overcomes Theater Threats and Grosses $602,000 in its First Six Days Out on Big Screens Across the Nation

The veteran made movie ‘Range 15’ has far exceeded TUGG ticket expectations and continues to aggressively push sales into July 2016. Defying the odds of funding, theatrical longevity and even terrorist threats, this group of moving making veterans continue to battle its way to box office success by doing things their way, while Hollywood watches off to the side.

Thanks to the more than 120 people that showed up for the #Range15 viewing party hosted by @mymmanews last night. @rangerup @range15 @mat_best_official

TUGG, the international cinema on-demand distribution platform, announced today that the opening box office of military comedy Range 15 has clocked in at $463,397 over this past weekend with an eye-popping $602,000 in pre-order ticket sales in its first six days available to the public. After raising well over $1.1 million via the Indiegogo crowdfunding platform, a group of impressive military veterans including “Lone Survivor” Marcus Luttrell, Mat Best, Nick Palmisciano, Alek Skarlatos and Medal of Honor recipients Leroy Petry and Clint Romesha, produced this first ever veteran-made film. Range 15’s nationwide release commenced last Wednesday via TUGG, and its creators are celebrating the new screenings being added daily.

Brian Parsons, TUGG’s Head of Content Partnerships, said, “The success of Range 15 is yet another example of the growing trend of content creators building communities and connecting quality content with like-minded moviegoers who are excited to join forces in support of films focused on shared passions.” 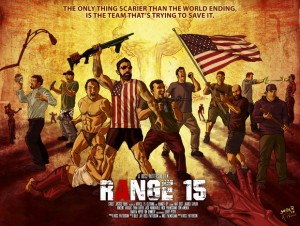 Range 15 opened nationwide three days after the Orlando ISIS attack. Following this tragedy, credible terrorist threats were made toward the makers of the movie, prompting TUGG theaters to add additional security to many of its venues. Detective Kyle Costa and Police Chief Robert Szala were interviewed by the Herald News surrounding concerns at Dartmouth’s AMC Theater specifically. Despite theaters being on high alert, Range 15 fans were unflinching, and theaters remained packed. Two of the movie’s veteran stars including Green Beret, Special Forces Sniper, Army Ranger and Professional MMA Fighter Tim Kennedy, and U.S. Army Infantry Officer Nick Palmisciano are current targets on the ISIS “Kill List,” so these warnings came with extra precaution. Kennedy began publicly speaking on the subject in Army Times and Fox News Insider back in January 2016. Palmisciano more recently was identified as a high risk target and too, shared statements as of late in JDNews. “This isn’t a community that you can rule with fear,” Palmisciano states. “Our core fans are troops, cops, firefighters and EMS. The average person hears that threat and assigns it a certain amount of gravitas. However, our fans think of it as just another Wednesday. We’re always ready, so the threat was almost a friendly heads up.” “I’ve never felt safer anywhere in my entire life than in theaters right now,” agrees Range 15 Hollywood Director Ross Patterson.

The box office total is an astounding accomplishment, not just because of Range 15’s revenue total, but because of the manner in which people had to purchase tickets. Using the TUGG distribution model, theaters have to be locked in place ten days before the screening date with a per screen requirement “audience threshold” to be met or they disappear. Also, showings can only occur Monday through Thursday, typically low traffic days for cinemas and tickets have to be purchased through TUGG.com, which forces movie-goers out of their traditional purchasing habits. “It’s insane what these guys have been able to do,” vocalized Patterson. “The military audience is purely dedicated. 80% of movie-goers typically buy tickets in person, the day of a showing, and almost everyone goes on the weekends. For these guys to sell a half million dollars worth of tickets mid-week and ten days, advance purchase is unheard of.”

“I’d be lying if I told anyone this hasn’t been a challenge,” stated Producer and former CIA contractor Mat Best. “But the support from the veteran community has been overwhelming, and people have been genuinely excited to be a part of what Range 15 is doing for the fans and represents as a whole. This is the first ever veteran financed film starring real vets and the fact that it’s had this kind of mainstream success is unbelievable.”

In the movie starring famous faces Sean Astin, Danny Trejo, William Shatner, Randy Couture and Keith David, a group of Veterans wake up after a night of partying to find out that the zombie apocalypse has spread across the United States. Together, they must fight their way across the country to find a cure for the outbreak and restore freedom before it’s too late. Range 15 curious? Movie enthusiasts, military devotees and zombie fans in search of intoxicating laughter can still find a nearby theater featuring Range 15 on TUGG’s website through the end of July. Digital and DVD release is anticipated mid-August by way of iTunes and Amazon.