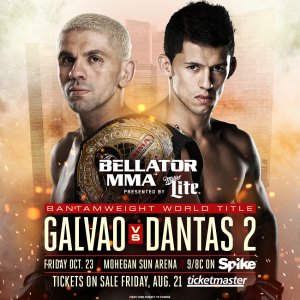 Bellator MMA’s Bantamweight Championship will be on the line in a rematch pitting Marcos “Loro” Galvao (17-6-1) and former champion Eduardo “Dudu” Dantas (17-4) against one another at Mohegan Sun Arena in Uncasville, Conn., on October 23.

The bout between the former teammates will serve as the main event of “Bellator 144: Galvao vs. Dantas,” which airs live on Spike at 9 p.m. ET/8 p.m. CT, while preliminary bouts will stream on Spike.com at 7 p.m. ET. Additional fights will be announced shortly.

Tickets for “Bellator 144: Galvao vs. Dantas,” which start at just $25, go on sale next Friday, August 21 at Ticketmaster.com and the Mohegan Sun Arena box office, with a special Bellator Nation presale available on the 19th and 20th for fans using the code: FIGHT. Doors for the event open at 6:00 p.m. ET local time, and the first contest takes place one hour after.

“I was thoroughly impressed with Galvao’s kneebar at Bellator 135 to capture the belt,” Bellator MMA President Scott Coker said. “Seeing how much that title win meant to him, by taking it back home to Brazil and visiting his mother’s grave, is really what mixed martial arts is all about to me. But Dantas showcased his desire to reach the top too by his performance against Mike Richman. I have no idea who is going to come out of Connecticut with the win, but I do know that those in attendance at Mohegan Sun Arena and those tuning in on Spike will be treated to a top-flight world title bout.”

“Loro,” who has fought for world-renowned promotions the likes of World Extreme Cagefighting and Shooto since 2003, will be competing for the 11th time under the Bellator MMA banner. The 34-year-old is presently in the midst of a four-fight winning streak and has emerged victorious in seven of his last eight scraps. In his last outing, Galvao finished Joe Warren “Bellator 135: Warren vs. Galvao” via submission to win his first-ever championship.

Meanwhile, Dantas will be looking to duplicate the success he had against Galvao in their first meeting, which resulted in a second-round knockout at Bellator 89. The 26-year-old Nova Uniao product bounced back from his unanimous decision loss against Warren to dispel of Mike Richman in the same manner at “Bellator 137: Halsey vs. Grove.” The Bellator Season 5 Bantamweight Tournament winner is looking to call himself a two-time bantamweight champion come October 23.

By Kristen King 16 hours ago