Sam Sicilia is happy to be part of the field for the Bellator Featherweight Grand Prix and get back to his tournament roots as a wrestler, while being able to advance his career within cage results.

What are your thoughts on the upcoming Grand Prix?
“Oh man, it’s super exciting! The format and the Grand Prix, the way they’re doing it; I think it’s awesome. The best way to do it for me. The best 16 guys and then it’s all about winning, that’s all it about. There’s no Twitter followers or hype guys passing you up. If you’re the better guy and you win, you keep going. That’s super exciting. “It makes the focus for the fighter easy. You have to get ready for whoever. Which is how it should be.”

What are your thoughts on having so many of the quarterfinals on one night?
“Yeah, that’s great. The way they’re doing this is, you know, like a dream come true. I grew up wrestling where you have the tournament, you know, the brackets come out and everybody competes. And the drawing the way they’re doing it. They’re doing a great job, my hats off to them.”

How do you feel about your first-round match-up with Pedro Carvalho?
“I feel great. I got a young hungry up and comer. A guy who likes to fight. Those are the kind of fights that get me excited. He’s not a dance around and kick my lead leg, point kind of guy. He’s gonna bring a fight. People should be excited about our fight. You know that’s the one to watch. If you want to watch two guys come out to try to kill each other, better tune in.”

I feel like that has been all three of your Bellator fights?
“That’s what I like. Those are the fights that bring the best out in you. Those are the ones that guys are looking for the finish, guys that want it geared a little more toward an actual fight; than a sport. You have to have a balance but their guy that get in there and look to finish. They’re not trying to point you. That’s how it should be, real fighters. He (Pedro Carvalho) trains at a tough gym. He’s on a roll but you go into this tournament and everybody’s is 0-0, nobody’s record matters once you’re in. It’s all about what you do in the tournament right now. It makes the focus real easy, just win. That’s all you have to do.”

Bellator 226 is set for September 7 at the SAP Center in San Jose, California. 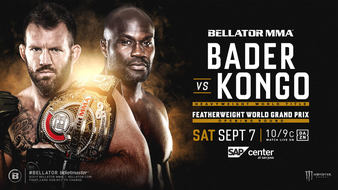