Seán Larkin (3-0) will be stepping inside the mixed martial arts cage for the fourth time in his amateur career, On Saturday night, January 21, 2017. Sean Larkin is scheduled to battle fellow undefeated fighter Kevin Mitchell (2-0). The three-round bout will take place on the New York Fight Exchange 13 fight card, “Checkmate”. The event takes place at the Amazura Concert Hall in Queens, New York.

Larkin (3-0), has been training for three three-minute rounds (the full length of an amateur fight) at his home gym, Commack MMA. Larkin’s first three amateur bouts lasted for a total of two minutes and thirty-six seconds, winning each fight via TKO.

“I’m a very diverse fighter,” Larkin said. Larkin trains in all areas of MMA preparing for where ever the geography of the fight takes him. As of now, the Commack MMA fighter soared through the competition early in his career via high-level striking. 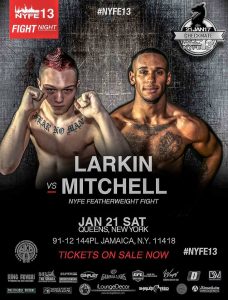 As a highly skilled grappler, it has been his next level striking that has allowed the young buck to stop all three opponents in their tracks via fists. In all three bouts, Sean Larkin finished his foes in the first round at 2:11, 0:17, and 0:08.

Seeking his fourth victory in his young career, he has an opportunity to elevate his stock in the New York State amateur circuit by winning a title contender bout against Mitchell on January 21.

Mitchell is another undefeated fighter seeking a New York Fight Exchange title shot. At 2-0 in his career, Mitchell is coming off a win at Extreme Cage Fighting 12 on December 17, 2016, where he finished Pilippe Shaidenfish at 2:31 in the first round via a TKO.

Mitchell, a strong striker as well, might have to become the first fighter to put Larkin on his back using a takedown in order to put a blemish on the Commack MMA fighter’s record. Larkin has yet to be taken down or put on his back in his three fights.

Larkin, 19 years-old, has not set a timetable to turn professional. At 3-0, and still two years from turning 21, a fourth win puts Larkin in title contentions with New York Fight Exchange (NYFE). Larkin’s maturity displayed through well thought out answers and composure while answering questions is a strong demonstration of his focus on his MMA career. 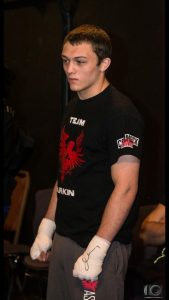 “These fights are opportunities,” Larkin said. He mentioned his willingness to take on any fighter, anytime. He’s hunting for an amateur title and expressed how he wants to feel the stress of defending a title. The former high school wrestler is seeking challenges throughout his amateur career and every scenario possible before turning professional, which will increase his level of success at the next stage of his career.

Larkin has been a fighter his entire life. Growing up without a father figure in his life, he had to learn on his own. Addiction is something that has affected the warriors family, even though members of his family succumb to addition, Sean battled past those obstacles and didn’t become just another statistic.

The young featherweight title contender has been fighting a battle most fighters don’t face. Larkin is a Type 1 Diabetic. Even though this creates a challenge for him with weight cutting, he has turned something that would most likely hinder most, into a positive. The Commack MMA fighter explains how being a diabetic has forced him to eat a healthier diet, which in turn allows him to cut weight easier and prepared for upcoming bouts.

Larkin can be compared to Frankie Edgar. Edgar, a fighter that is known for not cutting much weight and fights close to his natural weight. Sean Larkin does the same thing. Not cutting as much weight and fighting at a weight close to his natural build, it allows him to weight train, coming into bouts stronger and hydrated. He feels it has been a large part of his success thus far. 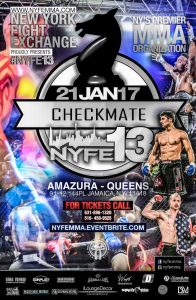 “This is a great opportunity to get my name out there more,” Sean Larkin mentioned when discussing his bout against Kevin Mitchell that’s coming up. Fans will want to get tickets now to catch these two warriors inside the cage going to war. Winner of the bout will remain perfect and the loser will suffer their first slash in the loss column.

Fight fans can expect a high-paced bout, full of action-packed mixed martial arts. These two fighters are young and hungry. Don’t be surprised of this bout ends up as a co-main event at NYFE 13 “Checkmate”.

Larkin wanted to thank Commack MMA, his home gym, Performax Physical Therapy and Wellness, P.C. – his friend Kerry Stellar, of In the Girls Corner, who colors his hair before bouts, Savage Athletics Inc., and Go Earn It Wrestling Apparel.

Doors are expected to be opening up at 6:30 p.m. EST. and fights are expected to begin at 7:00 p.m. EST on January 21, 2017. The event takes place at Amazura Concert Hall in Jamaica, Queens. Tickets can be purchased at www.nyfightexchange.com. Use Sean Larkin’s or Kevin Mitchell’s name when purchasing tickets.

By John Eric Poli 51 mins ago