Beginning his career in July of 2005, Frankie Edgar would storm through local competition en route to signing a deal with the UFC at 6-0. This saw him finish his first four opponents, and it saw him capture and defend the Realty Fighting lightweight championship prior to coming over. 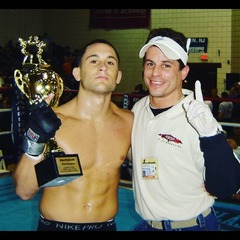 Edgar won the title against future WEC veteran and ROC featherweight champion Deividas Taurosevicius (4-1), before defending it a single time against fellow future UFC staple Jim Miller (5-0). He handed Miller the first defeat of his career, and Miller went on to become the winningest fighter in UFC history.

Upon arriving to the big show, Edgar would dominate former Gladiator Challenge featherweight champion Tyson Griffin (8-0, UD) in his UFC debut, becoming the only man to defeat Griffin throughout his first six promotional bouts, before stopping (TKO) Mark Bocek (4-0) in the first round of his sophomore effort.

Edgar would then defeat longtime UFC lightweight staple Spencer Fisher (20-3, UD) in his next contest before losing for the first time. Then fellow undefeated Gray Maynard (4-0) would be the man to hand Edgar his first defeat, doing so via unanimous decision.

Maynard was much bigger than Edgar, as were most, and he was the superior wrestler, securing nine takedowns in 15 minutes as opposed to Edgar’s one. 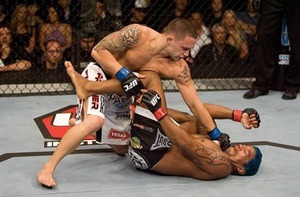 But, ‘The Answer’ didn’t stay down for long, as he would return just three months later to defeat another longtime veteran in former WEC lightweight champion Hermes Franca (18-6), who was 8-1 in his last nine and was coming off a UFC title fight against Sean Sherk at the time.

Edgar returned nearly a year later to defeat Sherk (35-3-1) himself, handily securing 30-27’s across the board.

Coming off back-to-back victories over a pair of former world champions, Edgar would then defeat Matt Veach (11-0), submitting (rear naked choke) him midway through the second round, and he’d next be facing one of the best to ever do it in a world title fight of his own.

lightweight championship. This was a disputed contest, the judges scoring it 50-45, 48-47, and 49-46 in favor of Edgar; some believed Edgar won, and others believed Penn won.

One thing is for certain though, no one expected Edgar to even give Penn a fight.

We all thought Penn would storm straight through him. 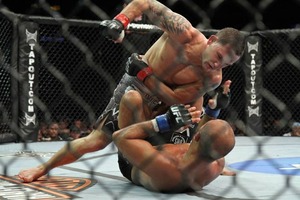 Not to mention, Edgar showed all of us he was the better fighter in their immediate rematch that took place later that year in August, where he absolutely dominated Penn (15-6-1) to a universal 50-45 scorecard in his first title defense.

Edgar’s second defense would come against a familiar face, the only man to had ever defeated him, Gray Maynard (10-0).

An immediate trilogy would ensue, and early on, it was the same as their second fight. Maynard (10-0-1) was busting

Edgar up bad early on, but the unbreakable grit of Edgar toughed it out en route to a fourth round KO victory.

Former WEC lightweight champion Benson Henderson (15-2) would be next to challenge Edgar for his crown, someone who’d gone 3-0 since joining the UFC’s roster, himself having defeated Mark Bocek and Jim Miller in that time just like Edgar.

Once the bout was said and done, Henderson walked away as the UFC lightweight champion. It was a great fight, and both talents showed up and looked incredible, but Henderson was just the better talent of the two that night.

Another immediate rematch would come next, where Edgar was challenging Henderson (16-2) for the title he’d just lost. 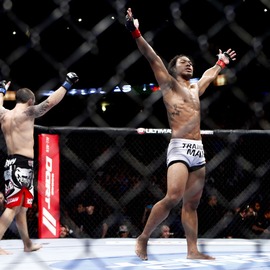 Edgar would lose to Henderson once again, this time via split decision.

This was unfortunate, because most believe Edgar won their second fight.

Henderson won four rounds to one in their first encounter, and Edgar won three rounds to two in the rematch. It’s too bad; not only because Edgar deserved to reclaim his throne on this night, but also because we were all robbed of an epic trilogy that probably should have happened.

Nonetheless, the second straight setback motivated Edgar to drop down to the featherweight division, where he’d challenge Jose Aldo (21-1) for the UFC featherweight championship in his divisional debut.

Though he’d lose this fight as well via unanimous decision, he did give Aldo his toughest test to date, only being outstruck by 13 total strikes, and even securing two takedowns during the five-round contest. 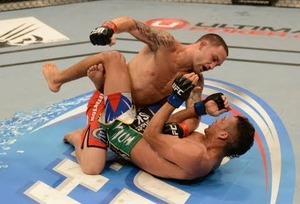 But he’d rebound with a unanimous decision win over future UFC lightweight champion Charles Oliveira (16-3), before defeating BJ Penn (16-9-2) for the third and final time, this time finishing the former champion via TKO in round three.

‘The Answer’ would then absolutely dominate longtime top featherweight contender Cub Swanson (21-5), submitting (neck crank) him with just four seconds left on the clock in their five round affair. Swanson came into that bout on a six-fight win streak, and many of us believed he should have been fighting for the title at that time.

Edgar’s next test came against former WEC featherweight champion Urijah Faber (32-7), who he handily won all five rounds against en route to a unanimous decision victory.

Next came a no. 1 contender bout against one of the greatest fighters ever to had never won a belt, Chad Mendes (17-3). This was a very highly anticipated contest, though it would end quickly as Edgar KO’d Mendes with a vicious left hook midway through the opening round.

Conor McGregor had defeated Jose Aldo for the title around this time, before leaving the division to fight at 170 lbs, and then 155 lbs. Considering we didn’t know if it was just a hiatus or if McGregor was done with the division, an interim title was created, where Aldo (25-2) and Edgar (20-4-1) fought for it in their rematch at UFC 200.

Edgar was 5-1 at 145 lbs at this point, only losing to Aldo in those six fights.

Aldo would defeat Edgar once again, this time also via unanimous decision, before Edgar would rebound with back-to-back victories over Jeremy Stephens (25-12) and Yair Rodriguez (11-1).

Something absolutely no one predicted would come about in Edgar’s next fight, as future two-time title challenger Brian Ortega (13-0) would KO him in the opening round with a vicious uppercut. 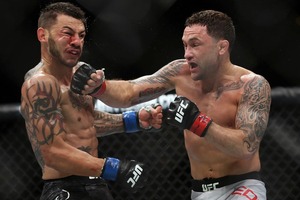 But, father time remains undefeated, as Edgar would finally fall victim to the knockout in his 29th professional fight.

‘The Answer’ defeated Cub Swanson (25-8) for a second time in his next outing, before challenging then champion Max Holloway (20-4) for the UFC featherweight championship, a fight he lost via another unanimous decision.

A second straight defeat would follow later on that year where he was TKO’d by former two-time title challenger Chan Sung Jung (15-5) in the opening round.

Edgar then decided to drop down to bantamweight, where he would pick up his lone victory in the division via split decision over Pedro Munhoz (18-4). Many believed Munhoz to be the better man when the fight was said and done, but it was very close. 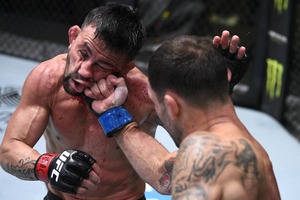 Throughout their five round encounter, Munhoz out-struck Edgar 166-135, though Edgar secured two takedowns against the Brazilian contender.

Unfortunate for Edgar and his fans, this would be the last time he won a fight.

Both the Sandhagen and Gutierrez defeats came early on in round one, but he was actually winning his fight with Vera, only needing 70 more seconds to secure victory over the current no. 4 ranked bantamweight in the world.

Vera is 10-2 in his last 12, though many believe he should be 11-1 in his last 12, only definitively losing to Jose Aldo in that time; Sandhagen was 6-1 in the UFC and went on to challenge for the interim bantamweight title, and Gutierrez is now 7-0-1 in his last eight with this victory over ‘The Answer’.

Throughout his 36-fight career, even prior to joining the UFC roster, Frankie Edgar always fought the very best the sport had to offer. Even at 41 years of age, he went into his last fight against perhaps the most talented unranked bantamweight on the planet, who now holds a no. 13 spot in the rankings.

The last time Edgar had fought an unranked opponent prior to this was back in 2013 and 2014 against Charles Oliveira and BJ Penn. He did the unthinkable by defeating Penn in their first and second fights, he avenged the only blemishes on his record to Gray Maynard throughout his first 17 fights, he KO’d Chad Mendes with ease in a fight everyone thought would be highly contested, he handed current no. 2 ranked Yair Rodriguez his first UFC defeat, and dominantly at that.

Going into his UFC 281 bout against Chris Gutierrez, Edgar stated that he was going to retire following the contest no matter what the outcome was. Despite going out on a three-fight skid, Edgar boasts wins over five world champions, and no one can ever take that from him.

Most think that number should be six, considering how his rematch with Ben Henderson went.

What’s more: Should he have gotten the nod in the Henderson rematch, he would have climb to 16-2-1, having avenged the only three blemishes on his record. Most of us believe he should have achieved that stat.

From debuting in the UFC just 18 months following his professional debut, to claiming the UFC lightweight championship in a fight no one believed he could win against a true great in BJ Penn; all the while weighing less than our current flyweight champion, to eventually going 3-0 in his three fights against ‘The Prodigy’, to becoming a multi-time title challenger a division below at featherweight (nine total UFC title fights), to securing wins in three different divisions and being ranked in the top five of three divisions, ‘The Answer’ certainly had a career to write home about.

Edgar’s NCAA Division I level wrestling aided him in winning so many fights, as did his unmatched endurance and quick, accurate hands. That’s what got him so many wins over the best in the world.

Thank you Frankie Edgar for your long, illustrious career. You will be missed.