WANDERLEI SILVA TO JOIN THE BELLATOR MMA FAN FEST IN PLACE OF RANDY COUTURE AT DAVE & BUSTER’S IN HOUSTON ON FEB. 18 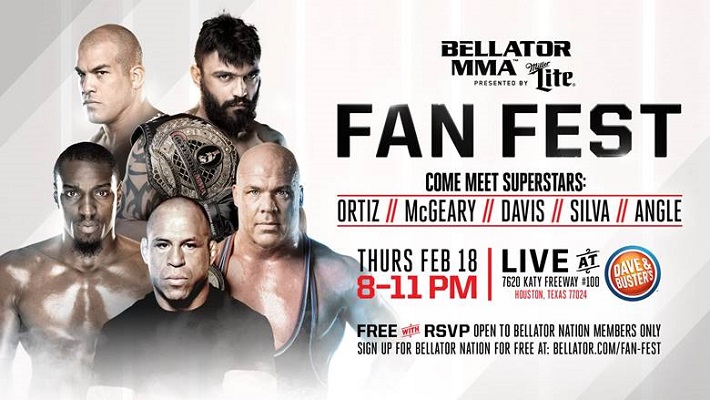 Fans of all ages are invited to Dave and Buster’s in Houston, TX to meet and receive autographs from some of the greatest and most popular combat sports fighters of all time. Fans will also have the opportunity to win tickets and great prizes, as well as snap a photograph with the Bellator ring girls.

WHO:                        The first British World Champion in the history of MMA will always be Liam McGeary. At 6’6 the towering fighter has achieved notoriety around the world with his impressive skillset which has seen him end fights with impressive knockout power as well as jiu-jitsu prowess.  Currently undefeated at 11-0, the future is bright for the Bellator MMA Champion. Most recently, McGeary defeated fellow Fan Fest participant Tito Ortiz in the main event of the groundbreaking “Bellator MMA: Dynamite 1.”

Bellator MMA’s no. 1 contender in McGeary’s light heavyweight division is none other than “Mr. Wonderful,” Phil Davis. A two-time division 1 All-American wrestler at powerhouse program Penn State, Davis has truly made a name for himself in MMA, being world-ranked within the top 5 in the 205 lb. division.  In his Bellator debut at the promotions “Dynamite 1” event, Davis won the LHW one-night tournament by scoring two victories – a submission and a knockout – in the same night.

“The People’s Champion” Tito Ortiz is a fan-favorite all over the world.  The former UFC Light Heavyweight Champion was one of the toughest competitors in the cage.  Utilizing his wrestling background, Ortiz was a grinder who defended his title an impressive five times.  Always with a flair for the dramatic, Ortiz had intense rivalries in the cage with guys like Ken Shamrock, as well as outside the cage with UFC President Dana White.

Having first fought in the sport almost twenty years ago, very few men have a more legendary resume than Wanderlei Silva. “The Axe Murderer” is a Pride and UFC veteran, who brings an intimidating and imposing presence with him every time he steps into the cage.  Currently one of the biggest free agents in the sport, Silva may soon return to action in hopes of adding to an already-impressive list of wins that include: Guy Mezger, Dan Henderson, Kazushi Sakuraba, Ricardo Arona, Kazuyuki Fujita, Michael Bisping, Cung Le, Brian Stann and Quinton “Rampage” Jackson twice.

Dave Meltzer’s “Wrestling Observer Newsletter” named Kurt Angle the “Wrestler of the Decade” for the 2000s. Angle has constantly been on top, winning wrestling tournaments since high school. In 1996, Angle won his first gold medal at the Olympics in the 90-100 kg division. After winning the gold he pursued a career in professional wrestler. He is the only one in history to have won championships in WWE, WCW, TNA and IWGP, totaling an impressive 13 World Championships and 21 total championship belts.

Also fighting –former light heavyweight champion Emanuel Newton (25-9-1) and Linton Vassell (15-5, 1 NC) will look to recreate their epic 2014 barnburner. In featherweight action, Emmanuel Sanchez (12-2) will look to continue his torrid pace when he meets Daniel Pineda (21-11) and a pair of lightweight assassins go to battle, when Melvin Guillard (35-15-2) returns to meet Mike Bronzoulis (18-9-1).

By Joe McDonagh 1 hour ago