Neiman Gracie picked up the biggest win of his mixed martial arts career last Friday at Bellator 245, where he submitted Jon Fitch in round two with an inverted heel hook after nearly submitting him multiple times in round one.

Gracie got wore on in the first half of round one, where Fitch had him up against the fence, and was able to secure a takedown. Gracie ended up locking in a heel hook from the bottom, but used it to sweep Fitch and get on top. 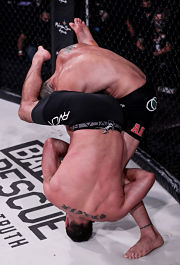 Fitch tried to get up but got his back taken. As Gracie was falling off Fitch’s back, he wrapped up a beautiful armbar, and it looked like the fight may be over right there.

Fitch was able to survive however, but was on his back for the majority of the rest of the round. Gracie really started to take the fight over in round two, leading up to the finish.

Gracie’s boxing looked surprisingly good, he landed some clean shots in the second round. He was wearing on Fitch against the fence, taking him down, he was doing whatever he wanted up until he got the tap at 4:47 of the round.

Not only did Gracie showcase his beautiful, flawless grappling, as he and his family always does, but he showed a well rounded skill set on Friday. It’s not often you see someone that can take someone like Fitch down. 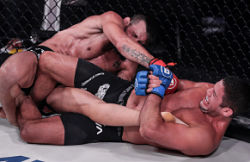 It’s important for someone that good at grappling to know how to get the fight to the mat, not all of them do, and Fitch has made a career out of out-wrestling his opponents.

This improved his professional record to 10-1, and marked his ninth win by submission.

His only defeat is to Rory MacDonald by unanimous decision when he challenged him for the belt. There’s no shame in having your only loss be to MacDonald, he’s one of the best welterweights on the planet.

It’s great to see Gracie really coming into his own. This was his first fight in 15 months, and he didn’t look rusty at all, he looked comfortable the entire time he was in there. He didn’t get discouraged when Fitch was trying to wear on him, he stayed composed and made it his fight.

This begs the question, what’s next for Neiman Gracie? With this win he’s surely close to another title shot, but he’s not quite there yet, and Bellator Welterweight Champion Douglas Lima is booked to fight for the middleweight title.

There’s Lorenz Larkin, who left the UFC in order to join Bellator while going 4-1 in his last five, with the only defeat coming via split decision. One of those wins was over Jorge Masvidal as well.

Joey Davis would be another interesting match up for Neiman Gracie. Davis is 7-0 in his professional career, and in Bellator, he’s grown up right here within the promotion. He’s a four-time NCAA Division II National Champion.

Actually, there are only three wrestlers in NCAA history across all three divisions that retired from college wrestling as undefeated champions all four years, he’s one of them. He did it across three weight divisions as well.

He got into MMA right after college, and went 5-0 as an amateur before turning professional, totaling a combined 12-0 MMA record to Gracie’s 10-1.

Not only is Davis a great wrestler, but he’s a pretty great striker too. Five of his wins come via knockout, one of those was a spinning back kick KO, and one was a flying knee KO. This kid is an incredible athlete, and he catches onto things so quickly.

Lastly, and this is the best match up of any of them, because both fighters deserve a No. 1 contender fight, is Yaroslav Amosov. We have yet to see Amosov lose, or even see him meet real resistance. He’s 24-0 with 19 finishes, including a 5-0 run thus far with Bellator.

Amosov’s first two wins in Bellator were over UFC veterans Gerald Harris and Erick Silva. Harris was on The Ultimate Fighter 7 and went 3-1 in the UFC with three straight knockouts, before being cut after losing his next fight via unanimous decision.

Silva had been released from the UFC, but picked up a first round submission (armbar) victory in the LFA before coming over to Bellator. Amosov then became the first man to submit longtime Bellator staple David Rickels.

Amosov’s most impressive win however comes over Ed Ruth, who happens to be Gracie’s second most impressive victory, and most recent win aside from Fitch. Amosov out-wrestled the three-time NCAA Division I National Champion to a unanimous decision victory.

Amosov didn’t only out-wrestle him though, he really out-classed him in all areas, he can mix it up better than just about anyone out there. There’s a reason he’s 24-0, and that against Gracie’s 10-1 makes for a very interesting fight.

If they were to fight, you’ve got to think Amosov is going to take Gracie down, at least at some point. Gracie’s a 2nd-degree black belt in Brazilian Jiu-Jitsu and a multiple-time Jiu-Jitsu champion.