The UFC’s featherweight division is absolutely stacked full of fun-to-watch, elite level, world class strikers, such as Georgian talent Giga Chikadze. He started off his combat sports career with Goju-Ryu Karate, which he now has a 3rd-degree black belt in. 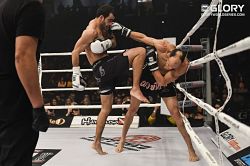 He then switched his focus to full contact kickboxing, where he went 38-6 as a professional, including a 6-3 stint in Glory.

As you see, he’d done very well in combat sports before even trying his hand at mixed martial arts. He started training and fighting in MMA about two years prior to retiring from kickboxing, going 3-1 before deciding to focus fully on MMA.

Chikadze won his next two fights, improving his record to 5-1 with five knockout victories before competing on the Contender Series in June 2018, a fight he lost via submission (rear naked choke).

He won his next two fights, one via submission (armbar), and one via TKO, before being called up to the big show, where he’s gone 5-0 thus far with one knockout and four decisions. 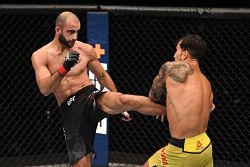 Chikadze had been searching for that knockout since making his UFC debut, and he finally got it in his last fight this past weekend at UFC Vegas 13. The best fighter he’s fought thus far inside the octagon would be either Jamall Emmers or Omar Morales, he needs a step up in competition.

There’s only one problem with that, seemingly everyone he signs to fight pulls out of the fight before they have the chance to make the walk, he’s fought quite a few last minute replacements.

Assuming his next match up stays together, what’s next for Giga Chikadze? Luckily, the UFC’s 145 lb division is stacked full of great strikers, and great fighters all around in general. Not that Chikadze needs to face a striker next, but that’d be the most fun for us to watch on his way to the top 15. 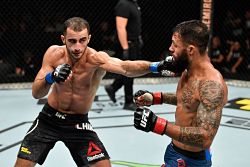 Seung Woo Choi (8-3) and Youssef Zalal (10-3) would both make for some pretty exciting fights, they’re both high level kickboxers, but Choi is 1-2 in the UFC and Zalal was just handed his first promotional defeat in his last outing. Chikadze being 5-0 in the UFC, we’ve gotta keep looking.

Charles Jourdain (10-3-1) would be a great fight to see him in. Though Jourdain’s gone 1-2-1 in the UFC thus far, we all know he’s a future top contender, and maybe even a future champion. He has incredible striking abilities, much like Chikadze, and his win in the UFC comes via TKO over Doo Ho Choi, a great name to have on his resume.

A fight with Hakeem Dawodu (12-1-1) is also very compelling. Dawodu went 42-5 as an amateur kickboxer, 9-0 as a professional, and he’s 5-1 in the UFC thus far, most recently defeating Zuba Tukhugov. 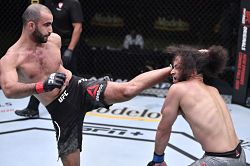 Andre Fili (21-8) is a big name that’d make for a good fight too. Fili’s had problems staying consistent inside the octagon, but he is one of the best featherweights on the planet, and he’s a great striker.

Lastly, is a match up with No. 15 ranked UFC featherweight contender Edson Barboza (21-9). Who doesn’t want to see two professional kickboxing champions go at it? Most of Barboza’s career has taken place at lightweight, all but his last two fights in fact.

Chikadze has also competed at lightweight, but has had most of his contests at featherweight. Barboza went 25-3 with 22 knockouts as a kickboxer, where 22 of Chikadze’s 36 kickboxing victories came via knockout.

The No. 8 ranked Jeremy Stephens (28-18) 1 NC also threw his name in the hat to face Chikadze next, which would be absolute fireworks! It’d be a serious step up for him, with Stephens being right in the middle of the featherweight rankings and Chikadze not having fought a ranked opponent yet, but it is a sensible fight to make.

At 32-years-old, Chikadze chose the perfect time to focus solely on mixed martial arts. At 6′ with a 74” reach, with his takedown defense coming further and further along, not to mention how good he is on the feet, he’s going to pose a lot of problems to a lot of opponents in the future, just like he already has.