The UFC’s lightweight division has been the most dense weight class in the promotion for some time now, and today is no different than ten years ago. It’s only gotten deeper and more stacked with all sorts of elite talent from all over the world.

One of those surging lightweight talents is Rafael Fiziev, who made his mark known this past weekend at UFC 256, where he brutally starched Renato Moicano in the first round. It was incredibly impressive, not many of us expected it to go that way. 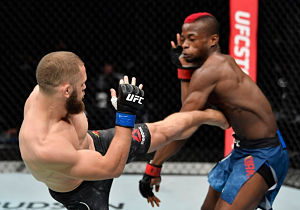 That would be because in Fiziev’s first three UFC bouts, he was finished (TKO) in 86 seconds by Magomed Mustafaev in his promotional debut, and won unanimous decisions over Alex White and Marc Diakiese.

He hadn’t had a finish inside the octagon yet, but man, this was a big one.

Renato Moicano, though coming off two defeats, was still ranked as a top ten featherweight before coming up to lightweight, and he stormed right through and submitted (rear naked choke) Damir Hadzovic in just 44 seconds of his divisional debut. 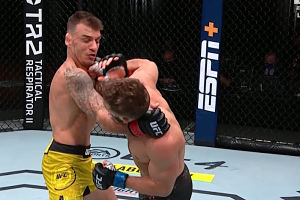 Fiziev has all those years competing in professional kickboxing to thank for that, where he went 39-8 and won a load of championships. Moicano has a black belt in Muay Thai, as well as a black belt in Brazilian Jiu-Jitsu. We were thinking maybe he’d be able to get to Fiziev’s back and get the submission, but it didn’t even come close to happening.

Fiziev is quick, knowledgeable, and kept the fight at his range the entire time, leading up to the KO victory at 4:05 of round one. This improved his record to 9-1 as a professional, and he’ll be knocking on the door to the top 15 very soon here.

This Kyrgyzstan talent is still only 27-years-old as well, he has a lot of time to continue evolving his game. His hips are already very strong and good at defending takedowns, and Magomed Mustafaev is a legit assassin, he knocks everyone out. Not to mention, it was his UFC debut.

After improving his UFC record to 3-1 with his recent knockout victory, what’s next for Rafael Fiziev? Another young surging talent that goes by the name of Arman Tsarukyan (15-2) would be an incredible battle. 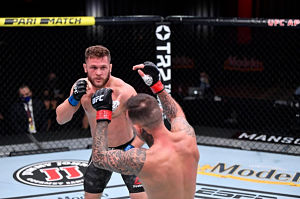 Tsarukyan is still only 24-years-old, and there are very high aspirations of him becoming world champion one day. This kid can do it all; he has great striking, even better wrestling and grappling, he’s a straight up stud. Tsarukyan has only lost once in the UFC, to Islam Makhachev, and it was actually a very close fight.

Tsarukyan is fighting Nasrat Haqparast (12-3) at UFC 257, should everything go as planned of course, but Haqparast also makes for a great fight with Fiziev, should he win. He’s also a very dangerous crafty striker.

This fight won’t give him a great push into the rankings, but a bout with David Teymur (9-2) would also be a lot of fun to see. Teymur, like Fiziev, is a multiple-time kickboxing champion that finished his career off with a record of 39-1. 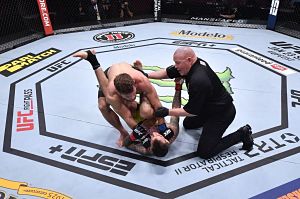 Another kickboxing champion he could face is Brad Riddell (9-1), who finished his career off with a record of 59-8, and has gone 3-0 thus far inside the octagon. They both have a very similar style; both hit and kick incredibly hard, both are as crafty on the feet as they come, and both of them are built like Greco-Roman wrestlers.

Lastly, is a fight with No. 10 ranked Al Iaquinta (14-6-1), who hasn’t fought in a while, but hey, neither has David Teymur. Iaquinta started out with wrestling, but he’s really turned into a really good boxer that can kick well, he’s a great striker.

Iaquinta went 14-0 as an amateur before turning professional, and was a finalist on The Ultimate Fighter 15, coming in second to Michael Chiesa. He’s since defeated Kevin Lee twice, Joe Lauzon, Jorge Masvidal, though many disputed the decision.

That would also make for a great fight, any of them would. It’s great seeing all these elite kickboxers switch over to mixed martial arts, and it’s great seeing the UFC give most of them opponents that are also strikers to build them up.

Everyone will know this young talents name soon enough, and it’s a sure thing we’ll be tuning in to his next fight!