Miguel Baeza has had a good amount of hype behind him since he came off the Contender Series back in June of 2019, and he’s maintained a perfect record since, picking up three-straight octagon victories in the 14 months he’s been here. 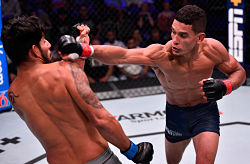 He won his Contender Series bout over Victor Reyna via unanimous decision, and made his UFC debut three-and-a-half months later against The Ultimate Fighter prospect Hector Aldana, who he TKO’d with leg kicks at 2:32 of round two.

Baeza then fought Matt Brown, who he KO’d just 18 seconds into round two. This was incredibly impressive considering how durable Brown is, and the fact Brown almost finished him in round one. 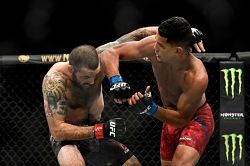 The Puerto Rican talent from Florida followed this coming-out-party victory up by finishing Takashi Sato this past weekend at UFC Vegas 15, securing an arm-triangle choke and getting the tap at 4:28 of round two.

This improved Baeza’s record to 10-0, and this marked the first submission victory of his career. Seven of his victories come via knockout, with two decisions, and now one submission.

We didn’t know he had that in his arsenal. Sato’s a very dangerous striker, and Baeza out-struck him until the fight hit the mat, where he was able to finish the fight.

Now that he’s a perfect 3-0 with three finishes inside the octagon, what’s next for Miguel Baeza? He hasn’t been getting ranked opponents, but his last two victories were over very skilled opposition, perhaps he should get one more fight opposing someone outside the top 15, or maybe someone in the lower part of the top 15. 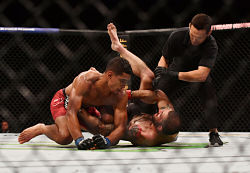 Anthony Pettis would be a fun fight to see him in, and Pettis is ranked at No. 12 as a welterweight. That’d be a great fight to get him into the elites of the division, should he win of course.

There is a report that Pettis is facing Alex Morono on Dec. 19, so that may not end up happening. The winner of that fight would make sense though, it won’t be too long of a layoff for either man.

Tim Means looked great at UFC 255, one week prior to Baeza’s fight, against Mike Perry.

Means isn’t a ranked contender, but he’s one of the more skilled talents on the UFC roster. Means really can beat 95% of his division on any given night, he’s a great fighter that doesn’t get anywhere near enough credit. 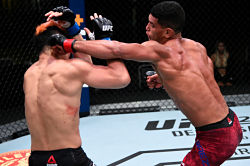 The No. 9 ranked Neil Magny has been left out of the loop recently as far as good match ups go, and though he probably wouldn’t take the fight, considering Baeza isn’t yet ranked, it’d be a great test to see where Baeza’s at.

Not to mention, it’s a battle of elite strikers that can grapple at a high level.

The No. 10 ranked Vicente Luque would also be a very exciting match up. Luque’s one of the best strikers in the sport.

Though he’s basic with it, he has all sorts of power, and his grappling is at a very high level as well. He’s one of the more diverse talents on the UFC roster as well. 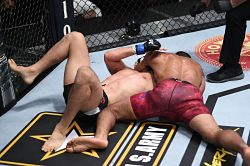 Lastly is a fight with Khaos Williams, who’s taken us all by storm this year. Williams started of the year by KO’ing Alex Morono, and ended it by KO’ing Abdul Razak Alhassan. These two bouts lasted a total of 57 seconds, and they were both straight up starchings.

Williams is very evidently as dangerous as they come on the feet, and a bout with him versus someone that knocked Matt Brown out, as a fan, there’s no losing should these two be matched up together.

Whatever ends up being next for Baeza, we’ll all surely be tuning in, this kid has an incredibly bright future. He’s at the point of his career where he’s just now approaching his peak, having turned 28-years-old in August. We still have another four years or so until we know how good he’ll become.