WSOF 26 took place at The Chelsea at The Cosmopolitan of Las Vegas.  The event was headlined by a featherweight title match between defending champion Lance Palmer and Alexandre Almeida. 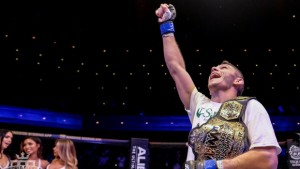 Despite being declared the winner via a unanimous decision and claiming the title, Almeida will have to defend his title in a rematch against Palmer, as WSOF President Ray Sefo said he did not agree with the decision.

The full WSOF 26 results include: