This week on Monday Night RAW, WWE treated fans to a roll-call of almost every major name from its past who’s still alive, and doesn’t work for another company. In what was billed as the ‘largest RAW reunion ever,’ no less than 39 former WWE stars turned up to appear on television in what should have been a celebration of the company’s star-studded past. Instead, it felt like a funeral procession.

The reasons for WWE calling on so many former greats is obvious. It’s no secret that ratings for both of its flagship shows – RAW and SmackDown – have been trending downwards for some time. When downturns have occurred in the past, Vince McMahon has always had a ready excuse to give to investors and television networks. Right now, with second-quarter financial results expected to be published any day, McMahon appears to be out of excuses. Worse still, there are rumors circulating that the USA Network and Fox, who recently spent big on securing the rights to the shows for the next few years, are beginning to experience buyer’s remorse. To spike the ratings, Vince brought back people who have made money for him in the past. Therein lies the problem.

The Law Of Diminishing Returns

One of the most common criticisms of WWE’s booking for well over a decade now is that they don’t create new stars. Nobody since John Cena has ever been given the ‘to the moon’ push that was once enjoyed by Brock Lesnar, Steve Austin, or Hulk Hogan. The one attempt at such a push that’s been made – which was with Roman Reigns – was loudly and consistently rejected by fans. By stubbornly refusing to turn Reigns heel when he was being booed, McMahon made the problem worse. A heel Reigns could have become a cool anti-hero who could have turned face again when the fans bought into his act – which is precisely what happened with his cousin, the Rock. Instead, Reigns was sent out week after week to act like he wasn’t being booed, and money was left on the table.

In the absence of a single breakout star, McMahon sends for old men. We need only look at recent major cards for evidence of that. Brock Lesnar is still treated as the biggest star in the company in his 40s, and rarely shows up to work. Goldberg and Shawn Michaels have been brought out of retirement to work the money-spinning shows in Saudi Arabia, because WWE doesn’t consider their current roster to have enough star power to appeal to that market. The Undertaker has been coaxed back from retirement with big-money offers so many times that it’s becoming hard not to feel sorry for the veteran every time he limps to the ring, clearly in pain from the physical trauma of a thirty-year career. His debacle of a match with Goldberg in Saudi clearly infuriated him, and yet he was back in the ring barely two months later at Extreme Rules.

Eventually, even the nostalgia pops will keep coming. Ask anyone who plays mobile slots, and they’ll tell you about the theory of diminishing returns. There comes the point when playing mobile slots that you’ve taken as much as you’re going to get out of a slot game in your current session, and you have to stop before you’re throwing good money after bad. At that point, most players just pull up another website full of UK slots and try a different game instead. WWE doesn’t have that luxury. They don’t have anybody else to call upon. Based on the evidence, they’re just going to continue recycling the same spent stars until the return is nothing at all.

Having made the decision to bring so many ‘legends’ back for the evening, WWE at least had the opportunity to do something with them that might make lapsed fans decide to tune in next week. There will undoubtedly have been a rise in viewing figures for Monday night’s episode, and people switched the show on to watch the wrestlers they used to enjoy when they were younger. Had those lapsed viewers been shown something that might attract their interest towards one of the new generation, they might have switched on next week as well. No such attempt was made.

In terms of WWE’s current programming, there was a chance to have a ‘big moment’ with Kevin Owens and Steve Austin that was so obvious it’s almost incredible that they missed it. Owens is currently being pushed as the ‘everyman’ good guy who rebels against authority and speaks for the fans. He’s up against Shane McMahon’s egomaniacal heel in a transparent re-tread of the Vince McMahon vs. Steve Austin storyline from twenty years ago. Owens has even been given the Stone Cold Stunner as a finisher, just to make sure everyone gets the point. Austin was in the ring last night. Owens was working a poorly-attended SmackDown house show, miles away. Shane McMahon was nowhere to be seen. Would it have been too much to ask to have Austin formally ‘hand over’ the stunner to Owens, and therefore pass him the torch and sell the story? Apparently so, because Austin did nothing other than talk.

The show’s closing segment saw Austin standing with a microphone, drinking beers, and giving a speech which was aimed at ‘the boys in the back’ more than the audience at home. Hulk Hogan walked out and spoke for two minutes. Ric Flair appeared and said nothing at all. Some comparatively lesser-known stars, such as Mark Henry, did nothing other than stand in the background of some scenes that were shot in catering. They didn’t need to be there, and none of the new talents got any kind of rub from their presence.

Austin’s final act was to raise a toast to the performers of yesteryear who’d gathered on the ramp to hear him speak, and the fans in the area. It felt like a goodbye. For WWE’s time as a major entertainment company, ‘goodbye’ might have been the most appropriate sentiment. Unless McMahon can be forced to change course and truly focus on his younger stars, it’s hard to see where things go from here. 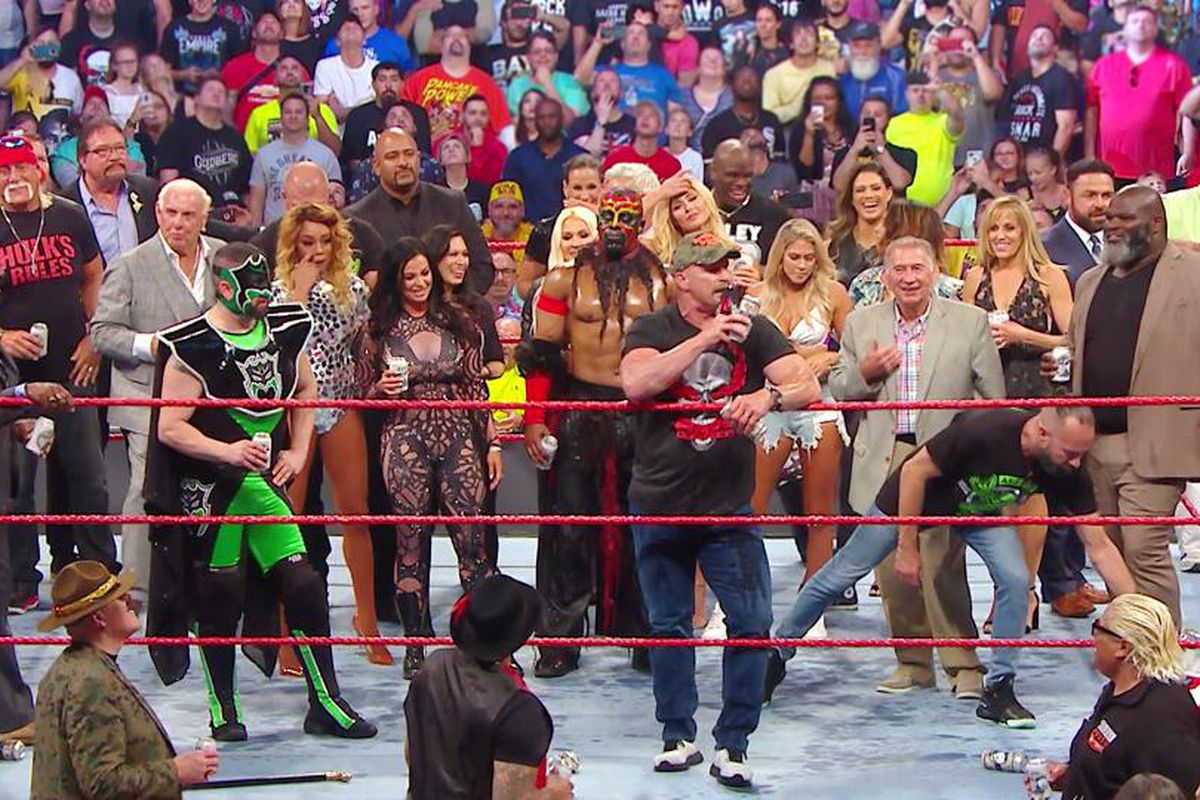 By Michael "Doc" Lipinski 3 weeks ago

By Michael "Doc" Lipinski 3 weeks ago

By Michael "Doc" Lipinski 4 weeks ago