Yesterday we were given the details of an incredible bantamweight bout agreement signed between top prospects Adrian Yanez and Randy Costa.

Of course, as the title suggests, they’re scheduled to meet at UFC Fight Night 193 on July 24, but should any bout be cancelled off of UFC 262, these two may get bumped up to that card, which is in Yanez’ hometown of Houston, Texas. 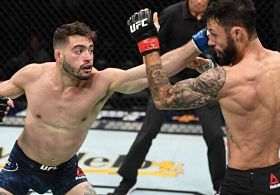 Randy Costa came to the UFC with a record of 4-0 in 2019, all four victories coming via knockout. He’d lose his promotional debut to a much, much larger Brandon Davis via submission (rear naked choke) at 1:12 of round two.

The Massachusetts native did however show a ton of promise in this outing, as his did in his next two.

Next came back-to-back first-round knockout victories over fellow touted prospects Boston Salmon (head kick) and Journey Newson (cross & punches), and he now comes into this fight with a record of 6-1.

After a 3-0 amateur career, all three of those victories also coming via knockout with two in round one and one in round two, he was forced to take a near four-year break. All three of those amateur bouts took place in 2014. 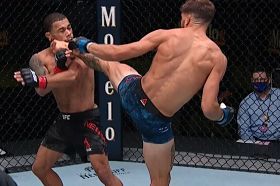 It’s pretty insane Costa’s as fluent as he is on the feet with his lack of experience, and also his inactivity early on.

This would be due to his best friend, and teammate, Devin Carrier, being killed in a car crash on his way home from practice one 2016 day. However, Costa couldn’t give up on his dream just because his friend wasn’t there:

“Devin and I were friends before the gym, before he passed he was always texting me to get another fight, so when he passed I felt like I owed it to myself and to him to keep going.” – Costa 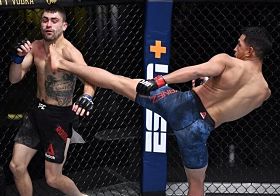 Adrian Yanez came to the promotion at UFC Halloween last year to secure a first-round head kick KO victory over Victor Rodriguez, before returning this March to knock Gustavo Lopez out, this time in round three with his hands, improving his record to 13-3.

Yanez also started his career out as an amateur, back in 2012, going 6-0 before turning professional in 2014, the same year Costa was attempting so hard to make his professional debut in.

Despite Yanez being the more experienced party, having just over twice as many professional fights, this is a very intriguing match up. These two fight very similar to one another, and each of their fans are really happy to see this go down, as Costa further explained:

“It started to get some steam, and other journalists started talking about it and it became this thing. It was actually really cool because it was the first time I had seen people get behind a fight that was provoked with nothing but positivity.

“It was really fucking cool. People were like, ‘Wow, this would be such a good fight,’ but there was no animosity, we weren’t talking shit about each other. If anything, we were giving compliments to each other so it was really cool to see and sort of change the angle of what MMA fighters can do.

“I know I have never seen a fight grow with nothing but positivity. There’s been no negativity, no shit talking, it was really cool. Even if the fight doesn’t happen, I’m glad he got to boost his stock a little bit, I got to get my name out there a little bit and it was just out of complete positivity.

This match up has been brewing since the start of this month, where Costa very respectfully called Yanez out when speaking with The Schmo. 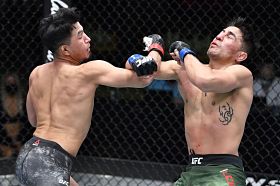 Yanez has stated before that he likes to mimic Cain Velasquez in his fights, but with his boxing and kickboxing, rather than with his wrestling, and Costa fights kind of like a younger Conor McGregor. He’s so slick and accurate, as is Yanez, that’s why this fight is so compelling.

They both have such incredible hands, they’re both so accurate, and each of them are every bit as dangerous and deadly with their kicks.

Out of Yanez’ 13 victories, eight come via knockout, and when including his amateur run, bringing his record to 19-3, 12 come via knockout. This is such an exciting match up, it’s almost a shame either of these two has to lose their next fight.

Who do you see walking out the victor in this stellar bantamweight match up?