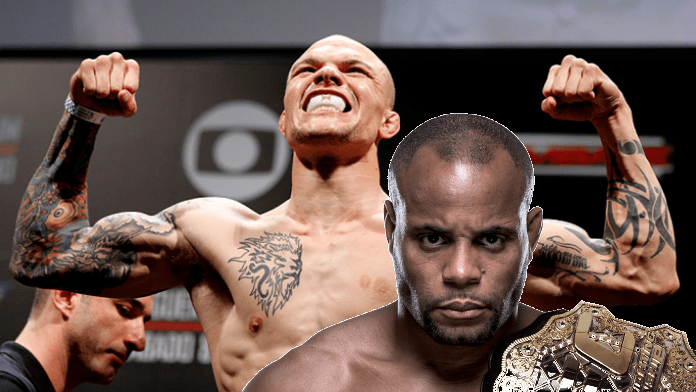 After winning the biggest fight of his career, capturing the UFC Heavyweight Championship, and making history by becoming the second man in the UFC two hold two belts at the same time, Daniel Cormier now looks ahead to what is apparently going be his first and another huge challenge,(literally) for his brand new title in Brock Lesnar.  The former UFC heavyweight champion Lesnar made a jaw dropping return to the octagon at UFC 226, in which Lesnar stormed the cage and started a semi-physical confrontation with Cormier that has lead to what will now be the next big money fight in the UFC.

Of course, the bout won’t be made official until this coming year in 2019 once Lesnar is fully cleared to return to action.

In the meantime, while waiting for Lesnar, Cormier recently came out and expressed interest that he wanted to defend his UFC Light Heavyweight Title against former champion Mauricio “Shogun” Rua.

“Maybe I’ll go fight Shogun, that would be good,” Cormier said on a recent episode of Ariel Helwani’s MMA Show. “I am serious, maybe I will go fight Shogun. He has won a lot of fights in a row.”

While this seems like a pretty cool idea, especially for UFC fans alike, there’s one problem with all of this, Shogun has a very important fight coming up at UFC Hamburg against hungry, young prospect Anthony Smith who’ll be looking to make a name for himself that night by defeating the legendary brazilian, an despite Cormier’s desire to fight him for his championship, it’s not a for gone conclusion that Rua walks away the winner of that fight.

For Anthony Smith, upon hearing this news of DC automatically laying out the challenge to Shogun, was upset as he feels Cormier is underestimating his ability to beat the former UFC Light Heavyweight Champion an completely overlooking him.

“I don’t know what’s going on with Daniel Cormier,” Smith recently told Fightful’s James Lynch (transcribed by Nick Baldwin for BloodyElbow). “He’s been saying recently that he thinks Shogun is next in line, completely dismissing the fact that Shogun has to fight me. I’m not sure what DC’s problem is. He’s smarter than that. He’s an analyst. He knows that anybody can lose at any point in time. He’s also smart enough to know that I’m more than capable of walking right through Shogun. He knows that that’s a possibility.”

“For him to completely dismiss me, number one, it pisses me off. Number two, it also puts me in a position where, if you think Shogun is next in line and I go in and starch Shogun, what does that say? Me and you are together now, bitch.”

“It does put a little bit of a chip on my shoulder, because DC is one of the first guys that bitches and complains about being overlooked and people not taking him seriously,” Smith continued. “But he’s the first person to dismiss people. It’s real easy to sit behind your desk and talk about how you’re not respected, and in the same damn sentence completely disrespect and look over somebody. He’ll look at this, he’ll ignore it, and he’ll pretend like I don’t exist, but regardless, DC knows that the Shogun fight is the gimmick.”

Do you think we actually could see Anthony Smith pull off the upset and meet Daniel Cormier in the octagon instead of Shogun?