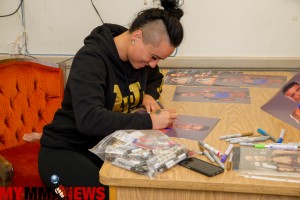 UFC women’s bantamweight fighter Ashlee Evans-Smith was on hand recently at the MMA Classic Fan Expo in Syracuse, New York when she told MyMMANews.com reporter Adam Crist that after a nine-month layoff she is looking for a fight.

Evans-Smith, (3-1) came off a nine-month suspension issued by the Nevada State Athletic Commission (NSAC) after testing positive for the diuretic, hydrochlorizide.  Diuretics are commonly used to assist fighters in cutting weight. Hydrochlorothiazide, in particular, is known as a prescription diuretic used to also treat high blood pressure and fluid prevention, among other uses.

Evans-Smith took a December 6 fight against Raquel Pennington on short notice after originally shceduled opponent, Holly Holm, was injured..  Evans-Smith cut Pennington early in the fight and the bout could have been stopped between rounds, however Pennington was able to apply a bulldog choke and won the fight with one-second left in the first round. 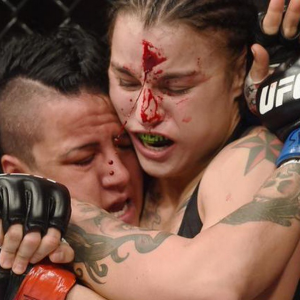 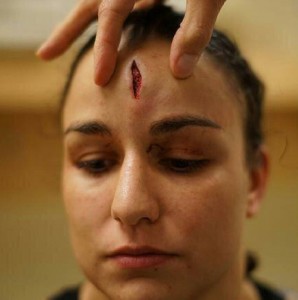 After serving out her suspension Evans-Smith is eager to get back into the cage.

Evans-Smith is currently the only female fighter to have defeated Fallon Fox, the first openly transgendered fighter in MMA history.

UFC matchmakers, if you are listening or reading, Ashlee Evans-Smith wants to go.

Evans-Smith also speaks about topics such as the #FreeNickDiaz movement, the lift of a Vegan vs Vegetarian, and her passion for punk rock music, particularly, the band known as Rancid.

By Kristen King 3 hours ago

Loopy Godinez training with Sarah Kaufman ahead of LFA title fight on Oct. 30

Diego Ferreira out of Drew Dober fight due to illness

UFC 254 Prelims – What you should know