Bellator MMA is spending the last few weeks of 2020 holding on to some of its talent.

First reported by MMA Junkie, the promotion re-signed five different fighters who are on the roster.

Among the list is two-time featherweight title contender Arlene Blencowe. The 37-year-old is coming off a second-round submission loss to champion Cris Cyborg at Bellator 249 in October.

The loss snapped a three-fight win streak for the Australian, who defeated Leslie Smith, Amanda Bell and Amber Leibrock. Her only other Bellator losses came to former champion Julia Budd [twice] and Marloes Coenen.

At 13-8, Blencowe still remains near the top of the women’s featherweight division

Mandell Nallo will remain a contender in Bellator’s lightweight division. He most recently fought to a no contest against Saad Awad after landing low blows at Bellator 249 in October.

It marked his first time back in the cage since suffering his first professional loss to Killys Mota at Bellator 231 in october 2019. He previously defeated Carrington Banks via second-round knockout and Alec Williams by a 18-second head kick knockout. 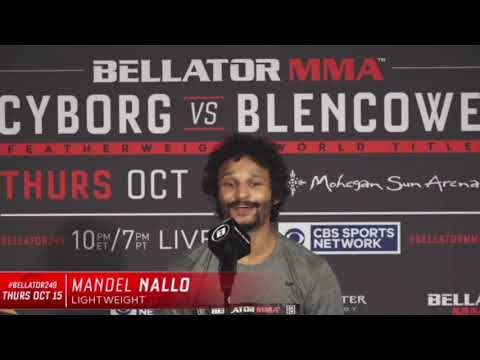 Chris Gonzalez is another rising lightweight Bellator wants to keep close. The Team Alpha Male product is undefeated at 5-0 with four of those victories under the Bellator banner.

The 29-year-old is fresh off a split decision win against Vladimir Tokov at Bellator 244 in August. His other Bellator victories include wins over Aaron McKenzie, Luis Vargas and Charlie Radtke.

Bellator is hanging on to welterweight Kyle Crutchmer. The American Kickboxing prospect is 6-1, suffering his first loss to Kemran Lachinov via unanimous decision at Bellator 249 in October.

The 27-year-old is 2-1 under the Bellator banner with wins over Robert Gidron and Scott Futrell.

Women’s flyweight Bruna Ellen will remain on the roster. At 5-3, Ellen is .500 inside the Bellator cage at 3-3. Ellen won one of her last three appearances, She most recently lost by unanimous decision to now-champion Juliana Velasquez at Bellator 236 in December 2019.